Where the Streets Have Too Many Names 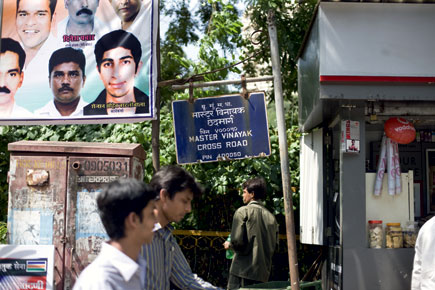 
Earlier this month, residents of Perry Cross Road in Bandra learnt that the late ghazal singer Jagjit Singh’s wife, Chitra Singh, had approached Brihanmumbai Municipal Corporation (BMC) corporators to rename the road after her husband. Appalled, they dashed off letters to the BMC and local corporators to oppose this. Accusations of egotism and greed were levied and newspapers contacted. The battle for Perry Cross Road was on. Except that, unknown to most, the road had already been renamed 32 years ago.

Just a few days prior to the ward meeting where local corporators were to consider the name change and then send the proposal to a BMC committee, it was learnt that Perry Cross Road was not Perry Cross Road. In 1980, it had been renamed Master Vinayak Cross Road after Vinayak Damodar Karnataki, an actor and film director who passed away in 1947.

Jaiprakash Karnataki, the 66-year-old son of Master Vinayak and brother of yesteryear actress Nanda, says, “I was extremely shocked, because it was not Perry Road, or for that matter Jagjit Singh Road. A day or so later, Asif Zakaria, a corporator from that area, had gone through various BMC documents and learnt that the road was named after my dad.” Chitra Singh’s request was then rejected at the meeting.

Now, in an additional twist, some residents of the locality plan to approach the BMC to revert the road to its original name—Perry Cross Road. Anil Joseph, chairman of the Perry Road Residents’ Association, says, “Our postal addresses, ALMs etcetera, all bear the name. And why was it altered from Perry Cross Road in the first place? This road is an extremely old one and named after a famous British collector.”

Jaiprakash, who lived with his sister on Perry Cross Road from 1956 till 1992, before moving to Santa Cruz, says he has been correcting people on the official name of the road for a long time. Last year, Karnataki claims to have met Sachin Tendulkar at a function organised by the Mumbai Police. Tendulkar had recently moved into a bungalow in that locality. “I introduced myself [to Tendulkar] and he recognised my father and sister. So I told him, ‘You don’t live on Perry Cross Road. You live on Master Vinayak Road. Please, use your postal address accordingly’.” The cricketer apparently said he would correct his error.