Trotting into the Sunset with Dignity

In the heart of Gurgaon stands a sanctuary for ageing police and Army horses after their retirement. 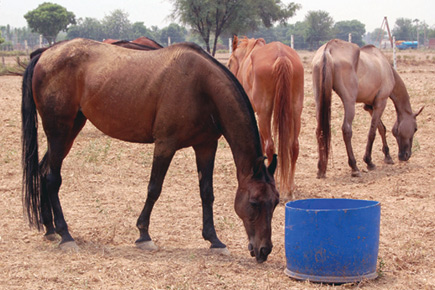 In the heart of Gurgaon stands a sanctuary for ageing police and Army horses after their retirement.


It’s a glorious calling to be in the Army, but not if you are a horse. Once it turns 12 to 15 years old, the Army usually retires the horse with a bullet. The police are kinder. They auction their horses off to tongawallahs. For an animal whose lifespan is 18 years, that seems a cruel way to end a career. But some police and Army horses are lucky. They get a decent post-retirement life in a sanctuary located in the heart of Gurgaon. Run by Friendicoes Seca, an NGO that has been working in the field of animal welfare for the past 28 years, the sanctuary is spread across 2.5 acres.

“Friendicoes actually started as a hospital for dogs. It was a place where stray animals would be taken care of,” says Tandrali Kuli, one of the board members of Friendicoes. When the NGO heard about the horses auctioned by the Delhi police which were being used to pull wedding carriages or carry weights, they decided to do something. “The horses need exercise but they are no longer fit to do such rigorous work,” explains Tandrali. The NGO appealed to the police to stop the auctions. “This was around ten years ago. We told them that we will take the horses from them free of cost,” she says. Later, Army horses were also taken in.

“There was a time when we wouldn’t even get one horse a year. But now things have changed; the Delhi Police has started sending in horses as soon as they retire. In fact, recently, we got four horses in a span of two years,” says Tandrali. As soon as the volunteers receive a call from Delhi Police’s headquarters in Central Delhi, a vehicle is dispatched to get the horses to their retirement home. Today, the sanctuary is home to 19 horses. It also houses 55 donkeys and mules rescued from brick kilns, 450 dogs and countless cats and bunnies.

The horses are put up in well-lit, spacious sheds. They are taken out daily for basic exercises followed by a grooming session. The sanctuary also has a full time veterinarian. There’s an easy camaraderie between the horses and other animals.

But with the number of animals increasing and bigger animals needing more space to move around, the NGO urgently needs more space. Initially, when it was a dog hospital, people misunderstood it to be a shelter and many who were shifting cities would simply dump their pets there. “Soon, we faced a shortage of space. All sorts of animals started accumulating.  That’s when we realised the need for a sanctuary. We started out with just 88-90 dogs. Today, once again we are falling short of space. We will have to think of a way to expand. After all, we can’t let these animals down,” says Tandrali.