To Catch a Killer

After two escapes, ‘Ripper’ Jayanandan is back in jail 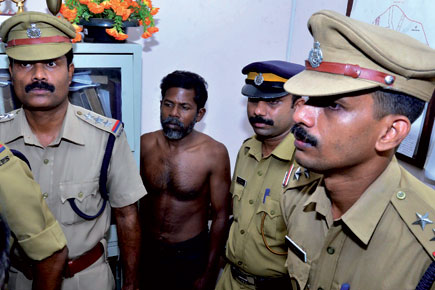 After two escapes, ‘Ripper’ Jayanandan is back in jail


Residents of Thrissur were relieved when ‘Ripper’ Jayanandan, the 45-year-old serial killer, death row convict and jailbreak expert, was recaptured by the police on 9 September. Jayanandan, accused of six murders and 27 burglary cases, escaped from Poojappura Central Jail in Thiruvananthapuram on the night of 11 June, his second jailbreak. He had made his first escape from Kannur Central Prison in 2009 after an abortive attempt to escape from Viyyur Central Prison in 2007.

Jayanandan was caught on his way to a house targeted for burglary in Nellayi, Thrissur. “We assume that he would have committed another burglary and possibly a murder on that day had he not been nabbed by the police. Eight types of lethal arms were found on him when he was arrested,” says Alexander Jacob, ADGP of jail administration, Kerala.

The police say Jayanandan committed four burglaries during his three months out of jail. He is said to have told police that he was not underground when on the run.

Ajitha Begum, Rural Superintendent of Police, Thrissur, says, “He told investigating officers that he participated in cultural programmes at Sahitya Academy in Thrissur.”

The police, however, are not ready to confirm that he has been under their noses.

Most agree a jailbreak is impossible without assistance from staffers. Jayanandan too seems to have had inside help. According to highly placed police sources, six officials in Poojappura Central Jail are suspected to have helped Jayanandan escape in exchange for bribes. “The investigation is in progress. We have almost zeroed in on the role of two of them, and may soon arrest them,” says a top jail administration official. Suspected officials were found to have made calls to Jayanandan’s wife in the days around his escape.

A native of Mala in Thrissur, Jayanandan has been convicted in two cases of murder and acquitted in three. The trial for the sixth has not yet begun. Police say most of his targets are women. He selects women-only houses, observes them for a few days and moves in for the kill. He committed most of his offences in the border areas of Thrissur and Ernakulum. Finally, residents of these areas can sleep in peace.