The Voice of Bhendi Bazaar

In the age of mobile phones, the tradition of a local announcer lives on in Mumbai’s Bhendi Bazaar 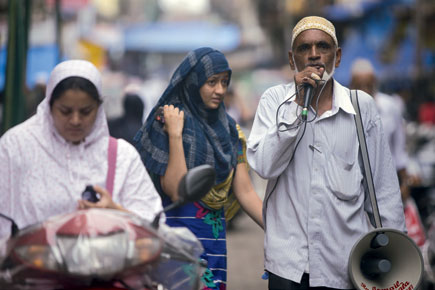 In the age of mobile phones, the tradition of a local announcer lives on in Mumbai’s Bhendi Bazaar


In one corner of the chaotic city of Mumbai, the voice of Ismail Ramupawala resounds above all the chaos. Ramupawala is the ‘death announcer’ of Bhendi Bazaar. When someone of the Bohra community passes away, Ramupawala gets a call. Then he picks up his microphone and meanders through the streets, making announcements loud enough to reach the highest of floors at every mini junction, keeping a nearly 100-year-old tradition alive.

Ramupawala, who many call ‘Ismailbhai’, also broadcasts happier news. “I also announce invitations for religious readings and wake-up calls for the 12 am prayers in the month of Ramadan,” he says in colloquial Gujarati. But for most, he is the mayyat pukarvawala (death announcer) or the khadim (server).

Ramupawala is 60. He has been working for the Hisb-ul-Huda (the Bohra death registration office), situated in Husseini Masjid in Bhendi Bazaar, for the past five years. Once a death is registered, Ramupawala puts his other activities on the backburner and embarks on his rounds. (He also does odd jobs for a local printing press and runs an evening tea stall for people fasting.) He cannot be slack as people rely on his announcements to turn up for the cremation or burial.

The khadim has to cover an area of approximately one square kilometre, from Pakmodia to Mutton Street. It takes him at least an hour to make a single death announcement, which includes the names of all the people concerned, along with details of the rites, if any. His job ends with submitting an obituary to a local newspaper, all for a sum of Rs 200. At times, he has to make more than two announcements in a day and his throat complains. “Teesra sudeen toh maru galu sukhai jai che,” he says. (My throat dries up by the third announcement). But with no one to fill in for him, he carries on even if unwell.

When the internet was unheard of and telephones rare, the local khadim was the messenger of local activities. In fact, before Ramupawala, no khadim used a microphone. Today, communication is a breeze. And yet, the echo of Ismailbhai’s voice remains a symbol of the past. “My grandmother has a mobile phone and reads the newspaper, but every time the khadim announces something, she listens attentively to what the old man has to say,” says Sameer Indorewala, an engineering student who lives in Bhendi Bazaar.