The Tao of Kali Worship

At a temple in Kolkata, Chinese expats appease the goddess with offerings of momos and noodles 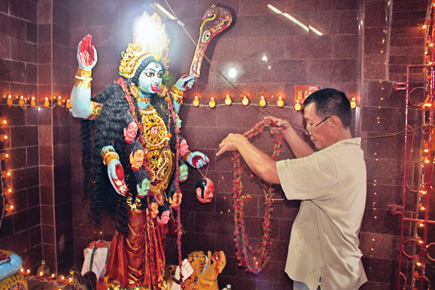 At a temple in Kolkata, Chinese expats appease the goddess with offerings of momos and noodles


Beijing would be left groping for a response to this: Han Chinese expatriates in communist-ruled Kolkata worshipping Goddess Kali with noodle offerings. On Saturday last, a few hundred Chinese residents of Tangra, India’s only Chinatown as such, fasted for and worshipped the Goddess and participated in the night-long pooja as they have been doing for more than three decades now. The priest is a Bengali Brahmin, but many of the devotees at the ‘Chinese Kali Temple’ (as it’s called) in Tangra were of Chinese origin. And none of them were, by the way, Hindus; all the 2,000-odd Chinese origin residents of Tangra are Christians and Buddhists.

“But most of us believe in the Goddess (Kali). We make it a point to participate in this pooja every year,” said Ison Sheng Chen, a tannery owner and secretary of this year’s pooja organising committee and the person entrusted with the responsibility of looking after the temple by the Chinese community.

Thirty years ago what is a temple today was just a small roadside shrine with two vermilion-streaked black stones under an old banyan tree. “Locals used to worship the stones as Ma Kali. Then one day, a young Chinese lad who had a terminal illness had a miraculous recovery after his parents prayed at the shrine. Since then, the Chinese started revering the shrine,” said Chen. The residents of Tangra, which is dotted with restaurants serving mainly Hakka cuisine, raised money to build a small temple to the goddess at the spot where the shrine stood. The two stones are still worshipped alongside an idol of the goddess. A priest was appointed to conduct rituals every morning and evening and many Chinese visit the temple daily. Some, like Amanda Chang, a Roman Catholic, offer pooja every morning, including Sundays on her way to the church for morning mass. Michelle Wong prayed to the Goddess for a boy one Kali pooja ten years ago. It was granted and she has been a devotee ever since.

Last Saturday, all of them had been busy since early morning. “Work was allotted to everyone. Some had to get the items required for the pooja while others had to decorate the temple. The groundwork had started a couple of weeks ago with some of us going around collecting donations,” said Chen.

Though the rituals are typically Hindu, there are some Chinese touches that make this pooja unique: the tall Buddhist incense sticks, the burning of handmade paper to ward off evil, the offering of vegetable momos and rice noodles. And, of course, Chinese devotees repeating Sanskrit shlokas after the priest.