The Rappers of Dharavi

Sout Dandy raps in Tamil and English on social issues. 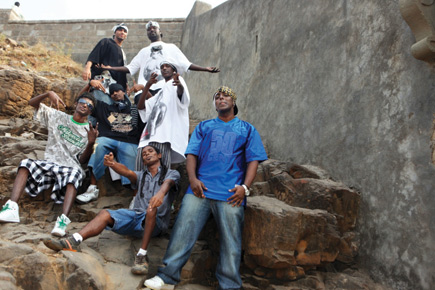 Sout Dandy raps in Tamil and English on social issues.


Danny Boyle isn’t the only one inspired by Dharavi. For Sout Dandy Squad, a group of eight rappers, ‘D-block’ is their hood and their inspiration. Dharavi has a huge Tamil population, and the majority of these rappers belong to the community. They call themselves Sout Dandy because “South is where we come from, and we are dandy”.

Sout Dandy raps in English and Tamil, on recycling, terrorism, child labour and other social issues. Unlike international rappers, they don’t drink, smoke or shoot up. Says 20-year-old Sean aka Suresh Agalianbose, “Rap will bring revolution, change the trend of India—poverty, terrorism, you got it?” You don’t get it, because the language they speak is a mix of hip-hop slang and Tamil. For his mate Satish aka Skinny Black, Dharavi is “chhota Chennai”.

Some in the group are employed, some study. Notorious Shankar, who works at the airport, maintains a notebook that he scribbles lyrics in. Skinny Black studies in class eleven and is a graffiti artist who experiments on Dharavi’s walls, besides his friends’ clothes and shoes. As part of a performance, he makes graffiti live on the venue. “Hip Hop is diverse,” says Becks, the only Catholic in this group. “It includes art forms like graffiti, dance styles like krumping and B-boying, not just rapping.”

They spend hefty amounts to wear only branded clothing, like Fubu and Machiavelli. A pair of sneakers can cost Rs 10,000, but that doesn’t stop them. Rap, they feel, doesn’t just start revolutions, it also rakes in millions.

For Sout Dandy, Tamil composer Ilayaraja is a big inspiration. When hip hop group Black Eyed Peas remixed one of his songs in their album Elefunk, for them it was an achievement bigger than AR Rahman winning his Grammy. Last year, they shared the stage with members of international Timbaland Productions and Apache Indian. They’ve also contributed to Quick Gun Murugun’s music.

The rappers, however, don’t want to tell you about the scene they intend to create. “You just wait and watch,”says Sean, and goes on to sing: “Rap till I die/step up and fly/ waving ur ma/distinguish and celebrate/multiculture and cooperate/ they call me Tamilian/and that’s how I operate.”