Pedulla Srinivas’s anthem against HIV is a viral sensation 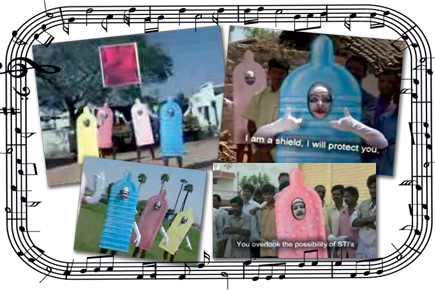 Pedulla Srinivas’s anthem against HIV is a viral sensation


According to a report by the Andhra Pradesh State AIDS Control Society, the state has seen a 100 per cent rise in condom use over the past four years. At least a little of the credit for the condom’s new-found popularity has to go to Pedulla Srinivas, 42-year-old folk dancer and the creative genius behind the viral sensation known as the Condom Song. The song, which has had “50 lakh hits till date,” features four pastel-coloured anthropomorphic condoms wiggling around a village in Rangareddi district in Andhra Pradesh, singing a ditty with a refrain that the video helpfully translates as ‘I am the condom friend ever useful to you’.

“I am the pink condom,” Srinivas says brightly. “The lead one, you see.” After a failed attempt at fashioning condom costumes from balloons, which proved impossible to dance in, Srinivas decided to make them out of thermocol, painted to look dotted or ribbed. That’s what his troupe hopped about in for three whole days, while the nonplussed residents of Shankarapalli looked on. “We specifically used one movement,” adds Srinivas, “lifting the heels, and walking on toes. By moving smoothly, we wanted to show that condoms are easy to use.” But with the panchayat giving them just about a week to shoot all four songs, the going was less than smooth. Their wary audience didn’t make things easier. “To tell you frankly,” says Srinivas, “it was very embarrassing. From 9 am to 7 pm, we were running around wearing nothing behind except a bermuda, and in front, only the condom. As we walked, children ran along, making fun of us, and elders would tell them, ‘Go inside!’”

Nevertheless, the videos, whose themes ranged from HIV, STDs and the consequent stigma that contracting them involved, were not just appreciated, they were widely used. They were screened in hospitals, and in counselling and testing centres, earning Srinivas a Nandi Award for best production and direction in 2005. Following projects for HIV-prevention awareness with PATH, John Hopkins University, the BBC World Service Trust and various NGOs, Srinivas would like to turn his attention to three brand-new themes: water scarcity, the rampant use of plastics and promotion of the Telugu language. “If god permits,” says Srinivas, “those will have a huge impact too.”