Silent and Clear in Varanasi 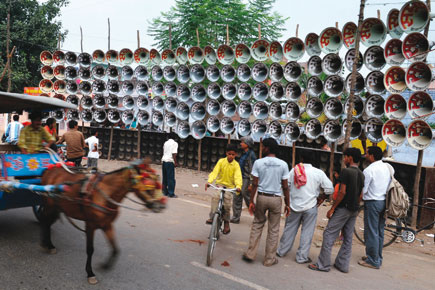 
Varanasi is the fount of Indian culture and it announces this loudly. Festivals, sermons, satsangs and even marriages are all occasions for unfettered noise. Chetan Upadhyaya of Mahmoorganj in Varanasi has a problem with it. So he distributes posters and puts up small hoardings in the city, informing people of their right to some peace and quiet at night. Harassed students, patients and office-goers ring him—mostly well past midnight—asking him to do something about the din in their neighbourhood.

The first thing he tells them is to call 100. This, by itself, is rather unusual. “In most other cities of Uttar Pradesh, hardly anybody calls up to complain about noise pollution,” says Vijay Bhushan, Superintendent of Police (City). The police respond at least once, and more often than not, the loudspeakers are muzzled. But Upadhyaya’s role usually starts soon afterwards when the speakers come back on. Armed with the phone number of the violator, given by the complainant who is invariably a neighbour too shy of confrontation, Upadhyaya swings into action. What follows can be comic or tragic. The outcome can be either an “I know where you live and I will kill you” or an assurance that volumes will be lowered. Many people for whom Upadhyaya has done this service in the past now offer their services as volunteers. Upadhyaya says his quibble is not against Akhand Manas Paths and all-night jaagrans or even late-night celebrations. It is simply against the use of loudspeakers on these occasions. To iterate this point, on 14 February 2010 he organised an all-religion conference in Varanasi. After the event Maulana Abdul Batin Nomani, Mufti-e-Banaras, and Shrikant Mishra, archak of the Shri Kashi Vishwanath Temple, came out in support of strict action against those creating a din. Nomani said that according to the hadees, it is an insult to The Quran if it is read out too loudly. Mishra said that religious ceremonies have no place for loudspeakers and that the ideal time for weddings in Hindu scriptures is evening—late-night marriages are thus against the laws of the land and religion itself. “But in my experience, neither logical arguments nor religious reasoning work when people are in the mood for some late-night ruckus,” says Upadhyaya.