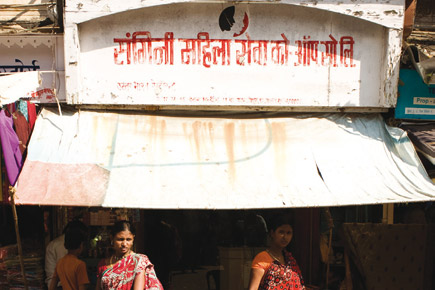 
Women in prostitution wage a continuous private battle against the ‘dirty money’ tag that comes with their earnings. A large portion of it goes to pimps, brothel owners and the police, leading to a continuous cycle of debt. Many sex workers live in bondage whereby they have to return what the brothel owner paid to ‘buy’ them from a pimp. In Mumbai’s Kamathipura, India’s largest red light area, one unique institution tries to make a dent in this vicious cycle of debt by helping commercial sex workers save money.

The bank was set up in 2007 by Population Services International (PSI), a Washington-based NGO which took care of rent, salary and other expenses of the bank. In December 2010,the NGO did not renew the contracts of a majority of staff members due to paucity of funds. Most of its employees have quit and the skeletal staff is unable to carry on the bank’s activities. Sex workers who hold accounts with the bank are worried. According to one account holder, the bank has become a lifeline to sex workers who use their savings to pay off debts to brothel owners, build homes and educate their children.

Before the bank started, many CSWs who had no birth certificates or residence documents found themselves unable to open accounts in regular banks or obtain credit. At Sangini, all it takes is a photograph to start a savings account.  The only condition is a member must belong to the local sex workers’ collective.

Sangini’s collection agents not only collect the money but also counsel, answer queries and deliver account books and photo identity cards once the account is set up. The agents make daily visits to assorted brothels spread across Kamathipura. Customers can deposit amounts as little as Rs 5. By one estimate, over three-fourths of CSWs put in a token amount of money every day.

Within months of the bank’s starting, its capital grew steadily and the amount remained invested in fixed savings schemes. Shilpa Merchant, former Mumbai head of PSI, which helped with the startup capital, says the bank began changing the financial outlook of sex workers.  The bank had recently opened branches in Vashi and Bhiwandi and started giving loans up to Rs 15,000.