A large number of African-Indians competed in sports to celebrate an African-American president’s first anniversary. 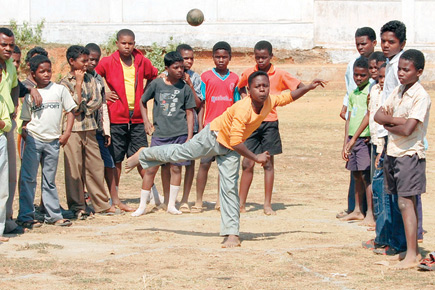 A large number of African-Indians competed in sports to celebrate an African-American president’s first anniversary.


By any reckoning, it was not an everyday sight in interior Karnataka, 450 km  from Bangalore. Men and women who looked like Africans playing kho kho and kabbadi to celebrate US President Barack Obama completing his first year in office. While the main feature of the meet was athletics, Siddi boys and girls also played kabaddi, kho-kho, volleyball and wrestled each other.

And when politicians present there promised to start an exclusive sports hostel for the community, there was a peculiar irony to it.  In the early 90s, people in India’s sports establishment suddenly realised that athletes of African descent were winning all the track events in the world. They came to know about the Siddi community, put two and two together and decided to train them in the hope that they would win athletics glory for India. It had been a similar sports meet almost two decades ago that led to the selection of the first batch of Siddi children. They were then moved to a sports hostel in Bangalore, run by the Sports Authority of India, and put on a training schedule to win individual Olympic medals for India. The programme, almost typically,  was later shelved due to infighting in the sports ministry.

The Siddis are forest settlers practising agriculture, and even to this day, they  venture deep into the Western Ghats to gather wood, forest produce and honey. Ever since Obama was elected president, they have been stirred  by the idea of a Black president. Last year, they planned to send Obama a bottle of honey but it was scuttled by the district administration citing US customs’ barriers.

The distinctly African-looking tribals are scattered in Gujarat and the Western Ghats region. They follow Christian, Muslim and Hindu faiths. Cut off from the rest of the world, they have managed to preserve their identity as they marry only within their community. Over the years, some of the bamboo hutments have been replaced with concrete. Some even boast of electricity now. While children attend nearby government schools, TV has brought them closer to the mainstream. “That’s why you see our women dressed in sarees and nighties instead of tribal dresses. Many also work as maids in Goan households,’’ says Diog Siddi, president of a Siddi organisation.

The event also felicitated those Siddi sportsmen who attained some success in the 90s. Around 500 children and elders showed off their athletic prowess. “As we are African descendants like him, we congratulate President Obama on his first anniversary,’’ Diog Siddi boomed into the microphone at Haliyal’s sports stadium. The two-day event on 20-21 January spilled over into an unplanned third day because of the enthusiasm of the community.