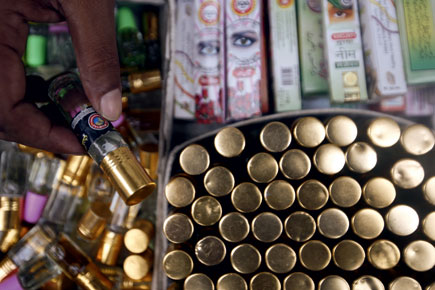 
Indians are increasingly recognising the need to smell good. Most popular fragrances, however, contain alcohol. For some buyers, this is a major deterrent as their religion forbids the use of alcohol. As a result, there is a growing market in India for non-alcoholic ittars that are actually knock-offs of international premium brands of perfume. Their makers brand them with names that are similar to the original, yet different enough to avoid copyright violation. Christine Dior’s Escada is called Escape, J’adore is Jade and Davidoff’s Cool Water is Blue Water. But what brings out the stark difference between the two is the price. Where Cool Water costs Rs 3,200, its cheap substitute is sold for a meager Rs 250.

The market for ittars was once quite distinct. It consisted mainly of Muslims, who believe that the use of alcohol is unholy. “In my family, the use of any alcoholic product is prohibited, so I have been using the ittar form of Hugo Boss. Even you won’t be able to tell the difference,” says a 21-year-old management student from Colaba.

Aliya Ladhabhoy has been using Pleasing, the ittar version of Estee Lauder’s Pleasures, for seven years. “A retailer once told me that alcohol is harmful. I didn’t quite believe him, but was tempted to try out the cheaper version. I don’t know whether it is healthier, but it lasted longer and I was hooked.” Opinion is still divided over what makes artificial fragrances harmful. “They can be damaging, but it has not been proven it’s due to alcohol,” says Dr Radha Chowgule, a dermatologist.

A veteran trader from the ittar market on Mohammed Ali Road, Mumbai, says, “The business of replicating fragrances caught on during the 1970s, when premium brands entered the Indian market.” Back then, the task required great skill. The liquid was passed through a GLC (Gas Liquid Chromatography) machine. Yet, all this process did was identify the liquid’s composition. Ten years later, with the help of GCMS (Gas chromatography—mass spectrometry), the exact compounds and their quantities can be identified.

This has helped manufacturers produce close to perfect compounds.

“There was a time when retailers had to coax a customer into buying fakes. Now it’s the other way around,” says Husain Attarwala, an exporter of natural oils based in Bhendi Bazaar.