No Country for Slender Loris 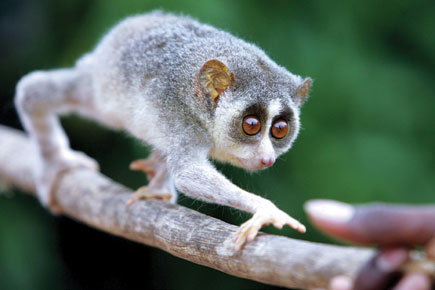 
If you look at the slender loris, it is hard to imagine why anyone would want to harm them. They are cute tiny creatures that move slowly, as if in slow motion. Even a fully grown one would hardly be 10 inches in height when upright. They have long, thin arms, small tails and large eyes. Found in dense forest areas, they only come out in the night because they can’t stand sunlight. Increasingly, these animals are being found with slash marks on their bodies, a sign that they are being used in black magic rituals.

Recently, People for Animals, an animal welfare organisation, found one with its left arm slashed. “Its limb had turned gangrenous and had to be amputated,” says Rajesh C, a PFA representative. Every year, two to three cases of abandoned lorises with such wounds are noticed.

“The number of cases involving witchcraft are increasing. There is an urgent need to protect these primates,’’ says BV Gundappa, a school teacher from Tumkur in Karnataka, who volunteers his time educating villagers to help in the conservation of the species.

The slender loris is native to India and Sri Lanka. Their known habitats here are forests south-west and west of Bangalore around Devarayanadurga and Tumkur. Forest officials confirmed the witchcraft mutilations, but say they are helpless in identifying the culprits. “Normally the creatures are high up in the trees or in thickets. People who poach them must be observing their habitat and climbing trees at night to bring them down,’’ says an official.

The objective of the black magic ritual is to cause bodily harm to enemies. Those who torture the lorises believe that the same will get transmitted to their targets. After the rituals, the lorises are left to die.

However, that is not the only danger they face. Many also get run over by fast-moving vehicles. A number of them are also succumbing to electric shocks while trying to move between trees using electric wires in farmlands.

Gundappa says they are easy victims because they move slowly. “These primates are also meat for tribals who have a superstitious belief that eating them would improve their eyesight,” he says.