A small but immensely popular eatery in Kerala serves food made by some home experts—three housewives. 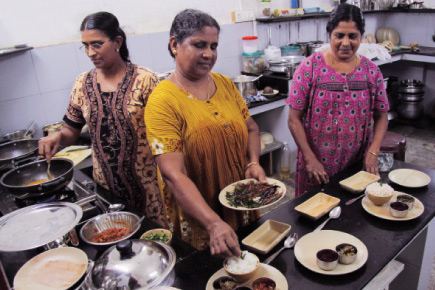 A small but immensely popular eatery in Kerala serves food made by some home experts—three housewives.


Mothers’ recipes may be popular inside the home, but it’s unusual to find women in restaurant kitchens. But in Kerala’s port city Kochi, three housewives and their home recipes have turned a small eatery into a popular tourist magnet. Since Shala was opened about a year ago, 40-year-olds Philomina Thomas, N Philomina and KP Mary’s dishes have made them celebrity chefs around Fort Kochi, the popular heritage area in Kochi. In a state where most restaurants offer degenerate versions of khandvi, chhole-bhature and lobster thermidor to please multilingual tourists, these three women have become brand ambassadors for a reverse trend: traditional cooking.

In fact, at Shala, six is a good, satisfying number. The trio has perfected six local dishes and serves one or the other of their gems on specific days of the week. For about Rs 300 per head, customers can choose a curry with chemeen (prawns), neymeen (seer fish), or kozhi (chicken), plus avial/kaalan (vegetable), a mixed vegetable curry and fish fry, always served on a banana leaf accompanied by steaming Kerala rice, salad, pickles and rasam.

The Fort Kochi area is popular with tourists for the ancient Jewish synagogue in its vicinity and the area’s exemplary Dutch architecture, but a not-so-small contingent now comes just for the food at Shala. “There are over 60 restaurants in the Fort Kochi region but tourists prefer this eatery because of the rare taste and quality of the food prepared by these housewives. The credit goes entirely to them,” says Shala’s owner-manager Anoop Skaria, who also runs Fort Kochi’s landmark Kashi Art Cafe.

These three first-time restaurant chefs travel 15 km to get to their workplace and prepare the day’s dishes; nothing is made in advance. And the only compromise to original recipes is the spice level. “Foreign tourists are not keen on spicy foods. So the use of chilly powder is very minimal in the items being prepared for them. But for domestic tourists, there would be no reduction,” says Mary.

All three homely cooks hail from the Syrian Christian community, which is especially good with spicy non-vegetarian preparations. “We make food in a most unprofessional way and that is the secret of our success,” says Anoop. In the restaurant, which is housed in an old Dutch-style building, only 30 people can be served at one time, but it belies the long queues outside.

Philomina, Philomina and Mary wouldn’t ever dream of ‘fusion’ cooking, or, heck, even increasing the repertoire of their menu. “We are happy with the good response of those who love original Kerala food. There is no room to experiment,” says Mary. Take it from a real Malayalee housewife.