Basketball has changed the lives of these Muslim girls in Mumbai 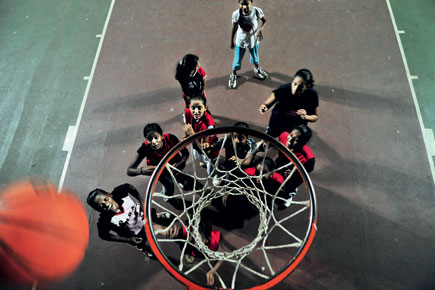 Basketball has changed the lives of these Muslim girls in Mumbai


They have been referred to as a reflection of the changing India in the media. But despite their personal circumstances not changing much, the girls of the Nagpada Basketball Association (NBA), who call themselves Bobcats, still pursue basketball.

Let’s start at the beginning. The girls first got eyeballs rolling as they were a team of only Muslim girls, playing basketball, and that too in the conservative Muslim neighbourhood of Nagpada. Known to be the home of underworld don Dawood Ibrahim, Nagpada is to basketball what Shivaji Park is to cricket. It has given India some great basketballers, including Abbas Moontasir, who captained India in 1975 when it stood fourth in the Asian Championships. And hence, it’s no surprise that the girls see the game as one that will help them escape poverty.

Their feisty nature on court and off it helps you believe they could turn this game on their head. Afsana Mansuri, 18, star player of the NBA, helps her mother wash dishes in a high-rise after school. Aafrine Sheikh, 18, who is known for her aggression on the court, is now looking after her ailing taxi driver father, and has just finished taking her second year exams. “I have to start earning soon. But actually it’s only when I am on court playing that I feel happiest,” says Afrine. Their joy stems from the fact that once they are on court, they metamorphose into independent women no less than the boys around them. Afsana says, “I feel worthy of being alive every time I shoot a basket. It’s a part of my identity. I know I am good at it and it makes me proud.”

It’s fortunate that their parents support them as well—Afsana’s mother Zainab, who was initially upset that her daughter started playing basketball, is now hugely proud. “We came to Mumbai 30 years ago from Bihar. Since my husband died, I have worked hard to send my kids to school. I just want Afsana to stand on her own feet.”

The girls do have millions of other dreams as well, which include modelling and earning a lot of money. And yes, they want to meet Shahid Kapoor, Hrithik Roshan and Imran Khan if they could. Is anyone listening?