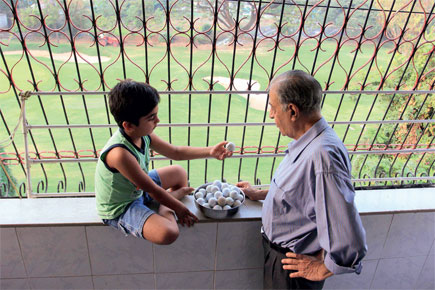 
Navjeevan Society in Mumbai’s Chembur suburb comprises 31 buildings, seven of which overlook the Bombay Presidency Golf Club. A visitor would think these residents got a good deal. After all, even a sea-facing home is easier to find than one facing golf greens. And it was true for the first 40 years of the Society’s existence. But in the past decade, golf balls have been going berserk on their premises.

“They have broken so many of our French window panes after [bouncing off] the adjacent building. Cars have deep dents in them. Our complaint letters are in vain. These rich people don’t take us seriously,” says Shyaam Nagpal, chairman of Navjeevan Housing Society, showing a bunch of balls they have collected over the past few months.

The course has been around for over 100 years, but it is only in the past 10 years that the problem began. “Earlier, most players were experienced, but today amateurs as young as 10 and 12 are learning to play there. They have no sense of direction,” says Nagpal.

Another apartment on the third floor is owned by an old resident, Shakuntala Madhwani. Her windows are protected with nylon nets. There was a small window that she had missed putting the nets on. The golf ball has found this target. “When the house was getting renovated, I don’t remember how many glasses had been broken,” says Shakuntala’s granddaughter Ekta.

“I have four windows in different rooms and directions and have had balls coming in from each one of them on various occasions,” says Komal Iyer. Her son was slightly hurt after a golf ball shattered a window pane while he was asleep. The golf club claims to have compensated for damages. Residents say not all have been addressed and the club is not putting up nets like it is done everywhere else. “I am unaware of the problem residents are facing. It has never come up in any of our meetings. In fact, we used to have an insurance fund for anyone injured by a ball. Even that was stopped around a year ago and I was wondering why. Please send me the letters and I will definitely take this up,” says Som Prakash Bahl, one of the oldest members of Bombay Presidency Golf Club.