In Worship of Military Ganapati 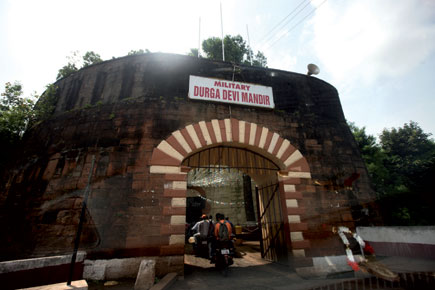 
This temple is a small place of worship built into one side of Belgaum Fort’s entrance. As one faces the fort’s circular archway, the temple is on the right and a guard room on the left. A constant stream of traffic is regulated by Army guards who also double as traffic policemen signalling vehicles to stop till traffic from the other side pass through. On the wall of the narrow entrance is a painted sign that says ‘Military Durga Devi Temple’. Along with the Military Ganapati and Military Mahadev temples on the Bangalore-Pune national highway, this makes up a troika of unusual temples in Belgaum.

Belgaum is home to the Maratha Light Infantry Regimental Centre. All three temples are located on land belonging to the Indian Army, which is their custodian. The temples are popular places of worship for the city’s residents and the Army allows access to the faithful. The temples date back to a period when the British had a large infantry post in Belgaum due to its proximity to Goa, which was under Portuguese rule. After Independence, the Indian Army took over the infantry centre and training school. “The prefix ‘military’ was attached by locals as these temples are on Army land,” explains an officer.

RD Purohit, a priest at one of the military temples, says it’s a tradition here for the uniformed service to keep the lamps burning and that the temples are administered by the Belgaum Cantonment Board.

The Military Mahadev temple in Camp area is by far the biggest. It has a well maintained garden and a deer park called mini zoo. The Military Ganapati temple is located on the other side of the Cantonment area, closer to the central prison.

The temples are popular both with civilians and military personnel. Suresh Belgaumkar, who works with a pharma company, says he grew up going to these temples and remembers them always being called by their peculiar names. “These temples are very clean. Access to the public is only at designated hours. Parking for vehicles is very orderly here with armed guards in Army uniform making sure that visitors follow rules.”