Her Pen Cannot be Muzzled

The establishment frowns upon a Kerala cop’s candid poetry about the system, but she will not back down 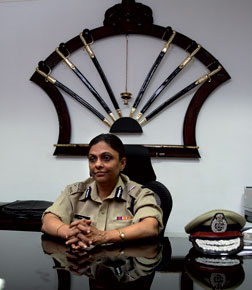 The establishment frowns upon a Kerala cop’s candid poetry about the system, but she will not back down


Mathew Arnold, the 19th century English poet, says that poetry is the criticism of life and it is governed by the laws of poetic truth and poetic beauty. The present chief secretary of Kerala, EK Bharat Bhushan, feels differently. Poetry, he says, cannot always be ‘criticism’ and it may sometimes be governed by ‘service rules’. And so when B Sandhya, Additional Director General of Police (Armed Forces Battalion), wrote a poem critical of the system, it raised Bhushan’s hackles. He cautioned Sandhya about writing poems that criticise others.

Sandhya came down heavily on politicians, bureaucrats and the media in her poem I can only be like this, which was published by a Malayalam magazine. The Director General of Police summoned her for an explanation. Sandhya said that she did not violate any rules by writing the poem and was exercising her freedom of expression. The DGP forwarded her reply to Bhushan, who cautioned her to be careful in her writing. The chief secretary holds the view that though Sandhya may not have violated service rules, she has to exercise restraint.

The poem, written in plain language, directly addresses politicians, bureaucrats, print and visual media journalists. Despite being poor in quality as a piece of literature, Sandhya has received support and solidarity from all corners, including poets. The Deputy Chairman of the Rajya Sabha, PJ Kurian, is among the eminent people who have protested against the chief secretary’s warning to Sandhya. Kurian has written a letter of protest to the government expressing concern over curtailing her freedom of expression. He has also mentioned in his letter that Sandhya’s poem is timely and a genuine effort to highlight the current state of affairs in Indian society.

K Sachidanandan, poet and former secretary of the Sahitya Academy, tells Open that it is undemocratic to curb freedom of expression, which is every Indian’s constitutional right. “It is not ADGP B Sandhya who writes the poem, it is the poet and the citizen,” he says. “If the bosses think that hers is not a poem, my question is who are they to legislate poetry? I will not bring my aesthetic judgment into this discussion of rights.”

As of now, nothing has been able to stop B Sandhya from writing. She has recently published a new poem in the same magazine. More power to her pen.