The canteen at Kolkata police headquarters is manned by girls rescued from brothels. 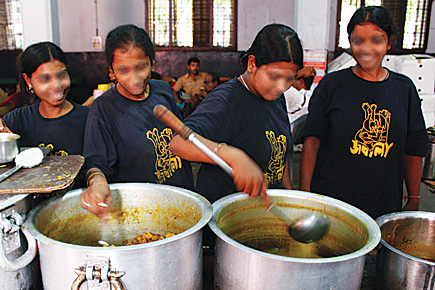 The canteen at Kolkata police headquarters is manned by girls rescued from brothels.


Since the last couple of months, patrons—policemen mostly—at the bustling canteen of Kolkata Police’s headquarters in Lalbazar, have been noticing 11 girls doing the cooking, serving and cleaning. They are uniformed in blue trousers and their black vests have ‘Empower’ emblazoned across in yellow. These are not your average employees; and this canteen, christened Rannabati, is unlike any other in the country. The 11 girls have been rescued from Mumbai’s brothels.

The girls earn Rs 2,500 a month, besides getting free food. But more than the money, this collaboration between Kolkata Police and Jabala, an NGO that rehabilitates trafficked women, is a fresh lease of life for them. Baitali Ganguly of Jabala says, “Rescuing a girl from a brothel is easy. The tough part is their rehabilitation. Many girls we rescue have the tendency to return to brothels since they’ve nowhere else to go. Their families refuse to take them back and they can’t do any other work. So we got in touch with the Kolkata Police and came up with this idea.”

Kolkata Police Commissioner Gautam Mohan Chakraborty says that working in the midst of policemen gives the girls a sense of security that they never had. “And helping them gives us a sense of fulfillment.”

The girls, too, seem to like working in the canteen. Mehbooba, 21 now, was 16 when a relative took her from her home in a Kolkata suburb to Mumbai. “He told my parents he’d get me work as a maid in Mumbai, but sold me to a brothel. Since then, my life has been hell. Being rescued was a relief, but I didn’t know what to do after that,” she says. “For the first time in many years, we’re being treated as humans and with respect. All the policemen here look upon us like their sisters and are very protective.”

The girls will soon have more work to do: Kolkata Police will award them a lucrative catering contract for the forthcoming series of nearly 600 football matches between local clubs of the city. The force organises it every year as part of its community policing project.

Jabala, meanwhile, is planning to modernise and upgrade the canteen, and put in more rescued girls to cope with the demand.