On his 2.5 acre plot of land, a Kerala jewellery shop owner has planted trees featured in the classics of literature 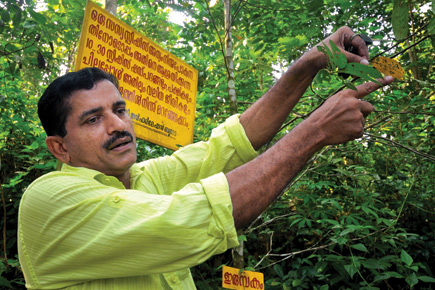 On his 2.5 acre plot of land, a Kerala jewellery shop owner has planted trees featured in the classics of literature


When V Mohammed Koya of Arambram in Kerala’s Kozhikode district inherited 2.5 acres of land from his parents five years ago, land prices in the state, which has the highest population density, were skyrocketing.  Koya, much to the disbelief of his family, decided to turn it into a public garden and added a twist of his own. The man who had to leave studies to follow his business interests, wanted trees there which are found in the classics of world and regional literature.

“This is the chestnut tree about which Gabriel Garcia Marquez talks at length in One Hundred Years of Solitude,’’  Koya points at a rare plant he brought from Latin America. Close by is a mangosteen, the favourite of Kerala’s legendary storyteller Vaikkom Mohammed Basheer. Neermathalam (Crataeva Magna in scientific terms), of late poet Kamala Das, is also standing close by. The Sababul tree, mentioned in Khalil Gibran’s works, is seen in another part of the garden. The Kadamba tree of Hindu mythology and the pine from the Bible are also in this garden. Koya is a secularist and an avid reader.

“I was in Dubai for over three decades. On my return, I felt sad about the disappearance of greenery in my village. I thought of preventing it in a minor way using my own resources,’’ says Koya. Owning a gold jewellery shop in the nearby town Koduvally, Koya channelises a portion of his income to the protection of the rare trees.

Inside the garden, each tree has a name board, which carries its common name and scientific name. The board also mentions the plant’s link to either religion or literature. Hundreds of school and college children visit the garden every day and Koya doesn’t have an entry fee. “Kerala’s forest minister visited the garden and promised an asphalted road at government expense to the garden,’’ he says.

“Wherever I go, my first priority will be collecting rare plants and saplings. People from the region who visit different countries  also contribute,’’ Koya says.

“In the beginning, I failed to convince even my wife and children. Elders in the family actually told me to go to a mental hospital.  But now I think they are slowly getting a sense of the ‘rationality’ behind my madness,’’ Koya says, with a smile.

“More than the garden, the efforts undertaken by this ordinary trader to uphold a noble cause deserves our appreciation,’’ says Peter Oppenheimer, a chance visitor to the garden from California in the US.