It’s actually happening in Mumbai, but rationalists dismiss it as religious bunkum 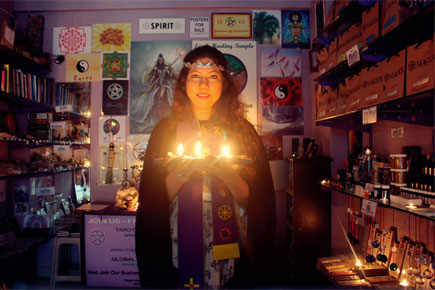 It’s actually happening in Mumbai, but rationalists dismiss it as religious bunkum


High priestess Swati Prakash insists that we all have magical powers. We are just not aware of them. The Wiccan, who says she was made aware of her skills at the age of 10 by a ‘higher power’, is now opening the doors of her shop, Magick, in Bandra to teach willing aspirants how to be healers, witches or Wiccans.

“‘Witch’ literally means the wise one. It means that this somebody has more knowledge and wisdom. And a wise one only uses power for the betterment and good of other people,” she says. The 42-year-old has started something called the Global Wicca Tradition. If you enroll for the courses, you could learn how to recognise your powers, mediation, divination, spells, crystal-ball-gazing, and finally take an oath to be a Wiccan and learn how to invoke gods and goddesses.

Remember the Hollywood movie Craft, where a bunch of teenage girls dabble with magic and run into some dangerous trouble? Swati says people need to be careful with their powers. “In my course, we judge the moral and ethical fabric of the person, and only if the person passes that test are they allowed to become a Wiccan. You need to use your power only for the good.”

But for rationalists, all this magic talk is just religious bunkum. Sanal Edamaruku, president of the Indian Rationalist Association, looks at Swati’s profession with some amusement and offers a rationalist view. “Witchcraft is just another kind of religion that cropped up in many countries in opposition to mainstream religion. Priesthood and witchcraft are actually different sides of the same coin. Why it flourishes is that people have this tendency to go against mainstream religion, and nowadays, with all these movies about witches and vampires, people think this may be interesting. Thinking you can control natural occurrences with a spell or something is not right,” he pauses, “Being a witch is like someone wanting to be Superman. I think dangerous religious systems are not good, especially if they are looking for children’s livers or something to cast a spell. But as far as beliefs go, everyone is free to believe whatever they want.”