Guruvayur temple stops a Dalit musician from performing on its premises 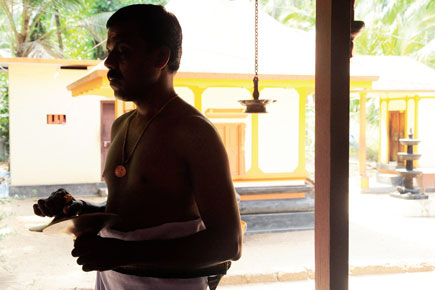 Guruvayur temple stops a Dalit musician from performing on its premises


Guruvayur temple stops a Dalit musician from performing on its premises

Kerala seldom hits the headlines for caste discrimination, but that does not mean its social fabric has been cleansed of the evil. Recently, administrators of the state’s most popular temple, Guruvayur, proved that by not allowing a Dalit musician to perform there. Kallur Babu, a taxi driver by profession, has been a percussion artiste for more than fifteen years. He was part of the Panchavadyam team that had a performance slated for 5 January in the temple. Panchavadyam is a traditional orchestra of Kerala with an ensemble of one wind and five percussion instruments.

“We had one performance during the day, and I played for about an hour and a half. We were supposed to perform again in the evening after a break. But in between, I was informed that I would not be allowed to perform inside the temple as I was from a lower caste,” says Babu, a Dalit.

Temple authorities say they are following tradition, because only members of the Marar community (relatively high up in the caste hierarchy) are permitted to perform percussion instruments in the temple. “It is an age-old tradition. We cannot change it arbitrarily on our own,” says Vijayan Nambiar, deputy administrator of the temple. “It is the temple thanthri (priest) who is authorised to decide whether to change a custom or not.”

Babu has lodged a complaint about the matter with the chairman of the Guruvayur Devaswom Board, the trust that oversees the temple. TV Chandra- mohan, the Board chairman who is also a Congress leader, says that they have decided to hold an inquiry by a retired judge.

This is not the first time that Babu is being discriminated against. A few years ago, he had performed at the famous Thrissur Pooram as part of the Panchavadyam team of another temple, Thriuvambadi Devaswom. “They did not include me the next year. I was told that Dalits are not permitted to perform on the temple premises,” he says.