Blame It on Gandhi 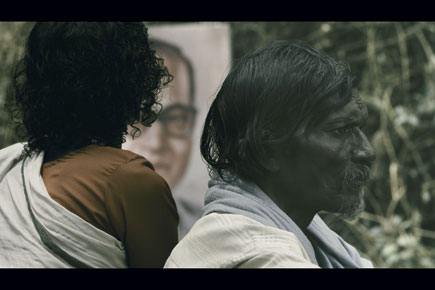 
A film on Dalits is being denied certification by the Central Board of Film Certification (CBFC) because of how it portrays Mohandas Karamchand Gandhi.

Jayan Cheriyan, director of Papilio Buddha, says the movie is about a Dalit group’s struggle for land in a village in the Western Ghats. After centuries of discrimination, they claim ownership of the land and squat on it. While rejecting the movie, the CBFC gave the following reasons—there are visuals of police torture under custody, use of filthy language, visuals of cops being disrespectful to Buddha, use of caste names in a derogatory manner and, what provoked it the most, a scene in which a Gandhi effigy is garlanded with chappals.

Cheriyan says it is unacceptable for a government body to judge a “work of art based on a set of archaic values”. He says the objections make no sense given that the context is of Dalits resisting oppression. The chappal garlanding, for instance, happens when they are confronted by the police. “They are being forcefully evicted and it happens during the protest,” he says. “Modes of protest like burning and garlanding effigies with chappals have been widely practised in the country. Why should Gandhi be exempt?”

Also, he adds, what the CBFC calls ‘filthy language’ is local slang used by people in reality and he dismisses the allegation that he used caste names in a derogatory manner. “The lower caste names used are indeed derogatory, but not to Dalits,” he says. “The upper caste characters use the caste names as a tool to insult Dalits in the movie.”

The CBFC gave the odd reasoning that viewers were not fit to see the movie.  “Certification is required only for public screening of a film. It is not relevant for film festivals, which are platforms for serious spectators who watch a film as a piece of art. They are wise enough to understand a film, but ordinary people are not able to accept a film only as a film,” says TP Madhukumar, chairman of the CBFC’s regional committee. He adds that the Board’s Revising Committee has recommended certification with a few cuts and that the controversy does not exist anymore. But the filmmakers say they cannot make the cuts. “It would kill the film,” says Prakash Bare, actor and producer of Papilio Buddha.