A Hotel for Change 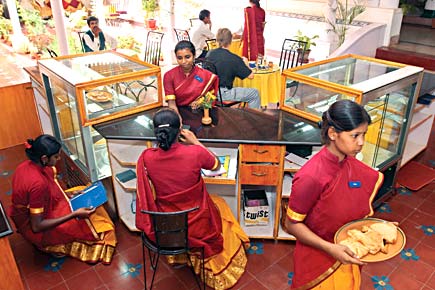 
Nineteen-year old Meena had made peace with destiny while earning a living as a labourer in an agarbatti unit. As a poor Dalit, there was little more she could aspire to. As it happens, she’s in a palace now. Or, at least what once used to be a palace and is now a hotel. The Green Hotel in Mysore, or the converted Chittaranjan Palace, has 11 Dalit women who were at the bottom of the social ladder working in their Malgudi Coffee Shop.

A Dalit handling food in a place where orthodox upper crust people eat would have been unthinkable not too many years ago here. If Meena’s grandparents or even parents had aspired to pursue such a job in their youth, they would have been punished. “We wanted to break untouchability barrier and make a political statement of sorts. These girls have been trained by some of the most fabulous people from the hotel,” says Marci Marcel Thekaekara, one of the directors of the hotel.

Marci has been writing about manual scavenging since 1997. She was inspired by Gagan Sethi of Ahmedabad-based NGO Jan Vikas. “He got two girls from the community to cook for the staff. It was non-negotiable; if someone had objections to it, then it was their problem,” she explains. Marci, however, didn’t face too much opposition when she started the initiative in the hotel.

It is heartening to see the girls, dressed in their traditional langa davane, baking dainty muffins and quiches in the kitchen. “I have learnt to be a good host. Besides baking, I am also learning to speak English and work on accounts,” says 19-year-old Rekha who used to do house work and the odd tailoring job before joining this place. The training has boosted the confidence level of most girls. Initially, Meena found it difficult to overcome her inhibitions in the new environment. But, today she has formed a bond with the staffers and doesn’t like to miss a single day of work.

Though parents of some girls were opposed to their working in the hospitality line, the advantages of the opportunity made them come around. As the girls go about their day’s work, they whisper dreams to each other. While some wish to start a bakery of their own, others wish to use their newfound knowledge of English to teach children. But one thing that unites them is their desire to do something for the betterment of their community.

“I have seen my family members suffer because of untouchability. If they wanted to fetch water from a common well, they would be told ‘don’t touch, you are a Dalit’. It’s not fair,” says Meena. “Everyone, whichever caste he or she is from, will finally go to one heaven.”