In total, an estimated 38.5 million live like slaves globally, and India accounts for 14 million of them 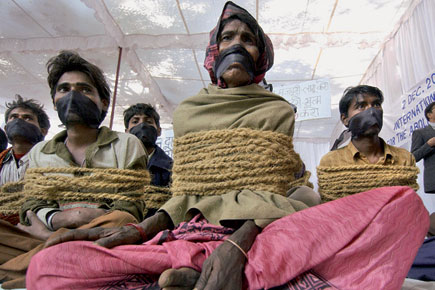 In total, an estimated 38.5 million live like slaves globally, and India accounts for 14 million of them


The second edition of the Global Slavery Index has been released and India tops the list: of all countries, India is estimated to have the most number of people who live like slaves. Pakistan and India together have a little under half the world’s people who live under slave-like conditions. In total, around 38.5 million are estimated to live such abject lives of human deprivation, and India accounts for 14 million of them. That, as The Times of India put it, makes this the ‘slave capital of the world’.

As a percentage of the population who have been enslaved, Mauritania is on top with 4 per cent. Indian is fifth by that measure, at 1.2 per cent. Other countries worse than India are Uzbekistan, Haiti and Qatar.

This year, Walk Free, which conducts the study, also measured the response of governments to slavery. With AA the highest rating, India gets a CCC, which is below B but better than CC, C and D.

Dalits were said to be the most vulnerable. The report said, ‘The limited ability [of] people to move out of this [caste] group increases their vulnerability.’

Confessions of an Ambulance Driver

“There have been deaths in my ambulance, but also births. At the set-up I work for, more than 13,000 babies were born in a vehicle”

Confessions of a Playschool Teacher

“Parents don’t take kindly to kids returning home with scribbles. They don’t understand that this is the best children can do at this age”

Confessions of a Ladies Tailor

“You might think you [are sorted because you] have your clients’ measurements. But two months later, they are of a different shape and form”