The emotional evolution in reading and writing 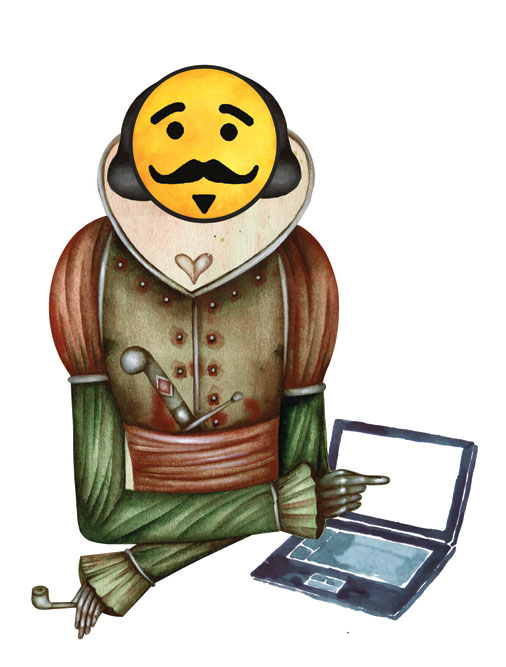 How many tabs do you have open at this moment? More than a dozen? If you are reading this on your phone, more than 30? How many of those tabs have you bookmarked? How many have you started, and wish to complete, but haven’t done so in more than a month? How many have you opened for their headline and strap, but are yet to proceed to the body text?

I check the tabs on my phone. I started an article on the recent film Kabir Singh in The Indian Express, but then moved on to ‘The Joy of Not Wearing a Bra’ in The New Yorker before wandering into an article on NPR on why ‘The Famous Big 5 Personality Test Might Not Reveal the True You’. At the end of it, I have read two articles and skimmed through the third.

Looking at my reading, I realise online reading is like a buffet dinner. The diner goes from dish to dish, tab to tab, serving herself what she wants. She is not obliged to finish what is placed below the cloche in front of her. This is not the à la carte dining of yore, where you could only take out two books from your library at a time, so you’d choose those books with great care and persevere through them no matter what. Today, the reader is the master of her plate: she can curate her readings to square perfectly with her choices, her whims, her moods. A little bit of politics, a dash of Hollywood gossip, a grand helping of history and a dessert of comics—the dinner plate is complete.

When we read online, we read in widening spirals rather than straight lines. We start at a point, but then move in whirls of discoveries, as each hyperlink offers its own story, its own chapter. We can travel to the hyperlink and return to our original destination, or we can choose a new trajectory altogether. The challenge for the novel today is not to mimic online reading habits, but to give the reader a similar sense of possibility. For the novel to stay relevant, it needs to acknowledge the change in its readers and how they read.

Unfortunately, the vast majority of novels are still stuck in the brick and mortar of words and pages. They haven’t caught up with the readers of today, who do so much of their reading online. But there are two novels, in my reckoning, which will be considered classics of the future.

While speculation is rightly considered the lowest form of journalism, one could hazard a guess and say, perhaps, Lincoln in the Bardo (2017) by George Saunders and Normal People (2018) by Sally Rooney will make it to the classics list 100 years from now. These acknowledge a new kind of reading and new modes of communication. These novels heed the changes in readers today.

Saunders’ novel is a challenge to read because of its multiplicity of voices and fragmented nature, which requires a dedicated and dogged reader. Normal People, on the other hand, is a breezy read, and one would be hard pressed to find a reader who does not enjoy it. In content, the two books could not be more different. One is about the death of an American president’s son, the other about two young people in love in Dublin. But their similarity lies in a structure that is both modish and contemporary. It is a structure that mirrors modern reading and writing habits.

Rooney uses texts and emails in Normal People in a way that is inherent to our lives, and essential to the novel. She doesn’t use them as fillers or vehicles for information, instead she shows how vital they are to every modern relationship. Today, we are writing more than ever before, because our communication at work, and at home, has come to rely so heavily on the typed word. During his Europe trip, Connell, the protagonist of Normal People, ‘completes the same three rituals of communication’: in every city he finds an internet café and then ‘he calls Helen on Skype, he sends his mother a free text message from his phone’s network website, and he writes Marianne an email’.

Today, we all partake of similar rituals, staying in touch with friends and family through these same mediums. Rooney succeeds in not only showing us how fundamental this mode of communication is to our lives, but also how we use the form itself. She hones in on the lack of capital letters in texts, the lexicons of meaning that can rest behind how long a person takes to reply and the status it can award within a clan when certain people reply promptly to one’s messages.


Most novels are still stuck in the brick and mortar of words and pages. They haven’t caught up with the readers of today, who do so much of their reading online. But George Saunders’ Lincoln in the Bardo and Sally Rooney’s Normal People will become classics 100 years from now as these acknowledge the new kind of reader

Sanders’ novel is set in the 19th century, but the reason it is truly contemporary is that it is a novel of daring, where the structure reflects how we read online. Social media is essentially a babble of voices on one page or platform, similarly, Lincoln in the Bardo reads like a play told in the voices of various characters. In an interview to the author Zadie Smith (Interview Magazine, 2017), we learn that Saunders had sent the manuscript of Lincoln in the Bardo to Smith without stapling it. It was bound together simply by an elastic band. To Saunders, this was the “ideal way” as it meant that the pages had a certain fluidity to them. Saunders was challenging the traditional linearity of the novel, he wanted to introduce Smith to the possibility that this book could be read by taking parts of it along with one on the train, and these pages could then be discarded. This is similar to how we read social media posts: we read them in isolation and they make complete sense, but we can also read them as part of a larger ongoing conversation. Today we read in chunks and bits, and not always in fulls and wholes, and then discard it all.

In the last decade, how we read and write have changed fundamentally. While many might lament that texting is not writing, and Twitter is not literature, it is more useful to see where we’ve arrived at, rather than what we’ve left behind.

Texting is not an inferior mode of communication, it is an effective one, as it reduces the possibilities of misunderstandings. Putting something down in writing, most often (not always), is to make clear and creates a guarantee for the future. Don’t you silently groan if a relative stranger dares to ring? Don’t we mutter to ourselves, ‘Why couldn’t he just text?’ Don’t we prefer the efficiency and brevity of texts to the jibber- jabber of a conversation with an acquaintance? Text tends to stick to a script, whereas conversation only follows the swirls of consciousness.

PRUDES OFTEN SCORN the use of emojis. But emojis are the punctuation marks of today; they don’t take away from words, instead they clarify them. They insert emotion and passion into texts. They animate a conversation, making it flesh and blood. An emoji lessens the distance between communicators, by helping to make our intended meaning known, by portraying our emotions.

Emojis might be a sign of millennial text, but in many ways they hark back to the hieroglyphs of our ancestors. The pictorial script invented by the Egyptians dates back to BCE 3,000 and marked the beginning of the Egyptian civilisation. Emojis perform the same function as hieroglyphs by representing the image of a thing or action and conveying the precise meaning.

In 2015, ‘Emojis’ became Oxford Dictionaries’ ‘Word’ of the Year. This proves that the laugh-till-I-cry face is not just a millennial shorthand, but rather a defining image of our communication. In October 2016, New York’s Museum of Modern Art announced its acquisition of the very first generation of emoji: 176 rudimentary icons designed by Japanese artist Shigetaka Kurita in 1999. This was a tribute to Kurita’s creations, which ‘planted the seeds for the explosive growth of a new visual language’.

Those who consider themselves vanguards of the literary world would be obtuse to not recognise the importance of this new and ever-evolving visual language. In the sixth major update since 2014, 230 new emojis have made it to the final list for this year. The 2019 list expands the kinds of people that can be represented, spanning those with hearing impairment to those with mechanical arms to a woman in a manual wheelchair. The new list of emojis also includes a Hindu temple, a sari and a Diwali diya, beside a range of interracial same-sex and heterosexual couples.

As reported in Wired, the Oxford English Dictionary adds about 1,000 new words every year to its existing 600,000 entries. Unicode (the UN of emojis) adds new emojis at about 35 times that rate. The addition of these icons highlights the beauty of language—language is not static, rather it is a forever evolving body of knowledge. The power of language is that it always has an ear to the ground, attuned to the changes in society and speech.

The emoji lexicon needs constant updating as users across the world hark for ‘a digital acknowledgement’ of their culture. The Wired Guide to Emoji (February 2018) speculates on its future: ‘A way to transcend language as we know it, toward a global culture and form of communication. We don’t all speak any one language—except emoji.’

Emojis democratise language, as anyone can understand a smiley face from a sad one. Since emojis centre only around nouns and verbs, they spurn the rules of grammar altogether. By ignoring grammar, they are the most democratic mode of communication. As the types and kinds of emojis explode across our screens, it is certain that they will play an increasingly greater role in how we communicate in the future.

The reader of today is one who exploits the possibilities of the web by tapping into its unlimited sources. She will not read something that doesn’t hold her interest, and while that is ideal for every reader, it also makes the job of the writer that much harder. How is a writer to keep a reader in his thrall, when she can silence him with a single click and a switch of the tabs? The writer who will stay relevant is one who is creating a new type of digital language, which crosses cultural and geographic borders and which is truly universal in nature.

A Longing for Home

‘Writing is Diving into the Chaos’