Towards a Smarter India 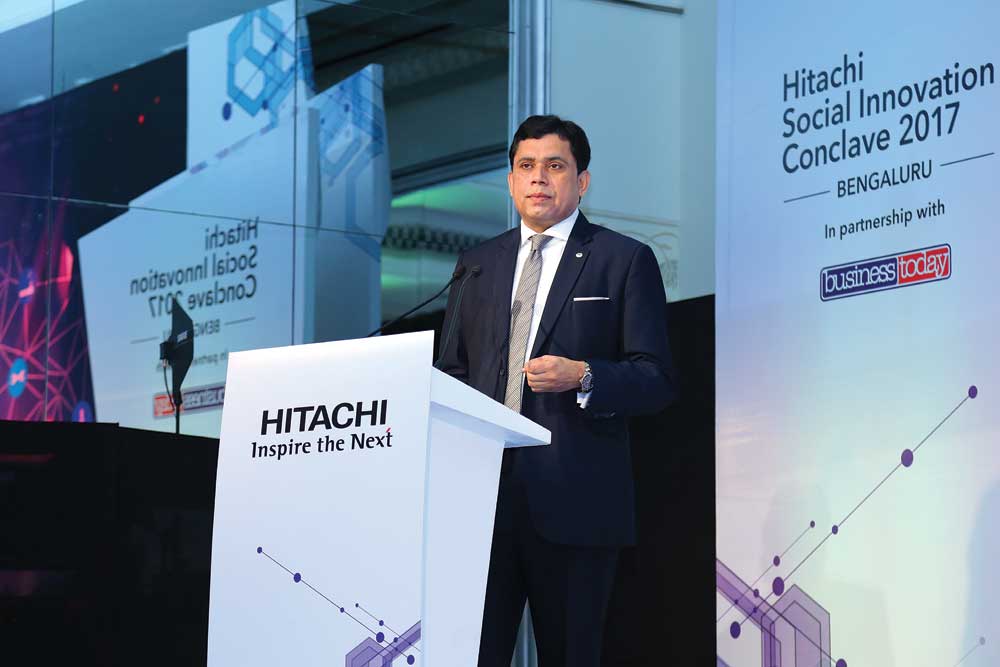 Prime Minister of India, Narendra Modi, is taking great pride in initiating the first bullet train project in India and with good reason: the project could well be the trendsetter for inter-city mobility in the country. The bullet train expects to cover the distance between Ahmedabad and Mumbai in less than three hours, vis-à-vis the current travel time by rail of over 8 hours. This is just one example of how the future is being reimagined and reshaped.

Hitachi has been and even today is, at the forefront of driving such change. In fact, the foundation of Hitachi’s relationship with India was laid way back in 1935 with the export of table fans, and this relationship was further strengthened through the supply of India’s first ever steam engine in 1953. Given the company’s over eight- decade strong bonding with India and its commitment to driving transformation through “Social Innovation”, it is not surprising that it took the lead to create a platform for “Collaborative Creation” to partner in shaping the future of the country. The Hitachi Social Innovation Conclave 2017, held in Bangalore Towards a Smarter IndiaAVENUESon August 24, offered a setting for collaborative thinking, sharing and direction setting.

Speaking at the day-long event, the Chief Guest, Mr. Gaurav Gupta, Principal Secretary, IT, BT and Tourism, Govt. of Karnataka, highlighted the concept of “social living” and how the State Government was looking to drive change through Internet of Things (IoT) in agriculture, health and education. He pointed out that through the Karnataka Knowledge Commission new technologies were being encouraged and nurtured in areas as advanced as unmanned aerial systems, and centers of excellence were being set up for Artificial Intelligence, Big Data and Aerospace, through industry-academia collaboration.

Mr. Gaurav’s revelations clearly emphasized the State’s commitment to Social Innovation. This seen in combination with the Central Government’s Smart Cities and Digital India programs leave no doubt that there is consensus across the political spectrum on the commitment to drive change by leveraging technology.

Hitachi India’s Managing Director, Mr. Bharat Kaushal, in his welcome address picked this thread to point out that the stage is set in India for a digital revolution. He opined: “There is an explosion of data being generated. Concepts such as IoT and AI present a plethora of business opportunities. The government is poised to ride this tech wave and is already taking several measures towards “digital inclusion”. This revolution must be complemented by the industry and private sector. We need to partner and pool in our repository of knowledge and resources in order to give India that leverage to become a “digitally empowered” country”.

Hitachi, on its part, was happy to bring on board its deep knowledge across the technology spectrum. Hitachi has a history of operational technologies of over 100 years combined with over 50 years of IT-led innovation, to add value to any thought leadership conversation on emerging trends like IoT, digital transformation and digital workplaces. The discussions that followed ranged from the leveraging of information technology for boosting top and bottom lines to the future Smart Cities and the demystification of the data pipeline.

A big vote for Industrie 4.0

Mr. S Ganesh Mani, Sr. VP of Hyundai Motor India Ltd. shared how Industrie 4.0 (i4.0), or simply, integrated systems end-to-end, was helping them speed up processes and increase agility. He cited the re-launch of the Verna model in a record time of six months as an instance. Mr. Nagaraju KB, CEO of BigBasket, pointed out that industry was being driven to adopt technology at a faster pace by pressure from consumers and that adoption of i4.0 has become an imperative to improve the customer experience, even as standardization for effective implementation poses a challenge.

Much of the discussion on Smart Cities centered on the subject of video surveillance, video analytics and the need for privacy safeguards.

Dr. Anjali K Mohan, Research & Policy Head at Indian Housing Federation argued in favour of a single law to govern the privacy and safety of such data. The other case made was to go first after the “low hanging fruit” as had been done in several states: using LED lights on streets, incentivizing citizens on garbage disposal and using large rooftops to generate solar power.

Not data for data’s sake

The need for quality data by a CXO today is a given. However, not always is data captured in a manner to meet such needs. In fact, many companies that believe they are data rich, actually discover that they are not capturing the right kind of data. Mr. Piyush Chowhan, VP & CIO of Arvind Lifestyle Brands pointed out that the retail brand wasn’t able to capture data on missed customers—those who walked out without making a purchase—and how not having information on why they did so and where they bought resulted in only partial data capture, which could lead to incorrect decision- making. This highlighted the need for wider data capture. Mr. Mukesh Deshpande, Executive Director of PwC India suggested starting data analytics in pockets (say, in the inventory system) to ensure that data capture is done in a way to meet the desired goals.

All panelists agreed that the future is about data. While some see a transformation of business intelligence (BI) to AI and data to Big Data as the big trends, others expect IoT and data engineering to be the buzzwords.

All participants were also in agreement on the need for businesses to focus on data, but one of the burning questions posed by several was: how to measure the true monetary benefits of implementing information technology systems for a business? The team at Hitachi Systems Micro Clinic through their outcome-based approach provided an answer to this, in a breakout session.

The diverse discussions also helped participants to appreciate the depth and diversity of Hitachi’s expertise. Hitachi today has a well-established footprint in India through 28 businesses, and operates in diverse industrial sectors that touch billions of lives–be it through Railway Solutions for enhancing safety in transport; Infrastructure Solutions to solve water supply and management issues; GIS Solutions for agriculture; IT Solutions for citizen centric services and e-governance; Payment Solutions for secure, and cost effective services across banking products; and R&D Solutions to make India future ready.

It is because of its own rich repository of knowledge that Hitachi has been able to draw and engage leaders from different walks of life to collaborate in offering thought leadership to shape the future of India.