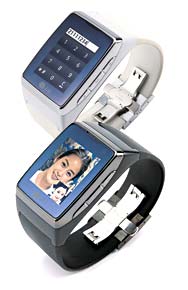 
This wrist gadget is a 3G mobile phone. You can also use it as a watch, if you want to. But for the fact that it can be worn on a wrist, it would have been just another touch-screen phone. It looks just a tad unwieldy for a watch. But if it were any smaller, the phone would have to be controlled by telepathic signals, in which case you would not need a phone at all. A model called LG-GD910, this GSM quadband 3G phone supports video telephony and can double up as your personal audio and video media player. However, with no provision for a card or radio, don’t expect it to entertain you on very long journeys. The phone also has speech-to-text capabilities, but we all know that even in the best of gadgets, this feature is still more of a gimmick than a killer app. The resolution of its 1.43 inch screen is pretty basic and the touch screen also seems to be an elementary single-touch. At 13.9 mm, it is thicker than many smartphones. But, all said and done, it is a first. Whether it goes on to become a classic or not, we’ll be around to tell you. For now, in a phone priced at around $1,500, you would expect more. No wonder that black and silver slab, the iPhone, continues to finger flash a victorious ‘V’.