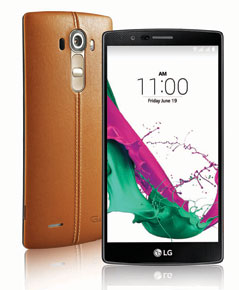 The LG G4 CAN easily be called the best phone produced by LG so far. At Rs 51,000, the phone is in its flagship bracket and wants to compete with the biggies out there.

The G4 can be mistaken for an LG G3 with a leather back, but when you look at it carefully, you notice how LG has changed it. More squarish corners and a slight curve give the LG G4 better grip and a comfortable hold. The phone features dual SIM slots as well as a micro SD card slot.

LG claims that the G4’s camera— with an f/1.8 aperture, a 16 mega- pixel sensor and manual settings that let you adjust ISO settings, white balance, and slow down the shutter all the way to 30 seconds, among other things—is good enough to replace your DSLR. The images are sharp and the camera is super fast at switching on from an app to its focus lock. The G4 now lets you save your images in RAW format so you can process them later.

On the inside, the LG G4 runs on a six-core Qualcomm Snapdragon 808 processor, which is supported by 3 GB of RAM to take on all the tasks, and uses Android 5.1 Lollipop as its mobile operating system. The highlight of the phone is what LG calls its IPS Quantum Display, which offers far better colour reproduction, higher brightness, sharper resolution and a great contrast, making this one of the best screens available in a mobile phone in the market right now.

The LG G4 comes with LTE wireless communication capacity and supports all 4G networks in India. You get a choice of three colours in the leather back version, and you can also choose a pure ceramic white with a 3D pattern, a forged metallic gray or a shiny gold plastic back (if you do not want leather around).

With the special attention LG has paid to the materials, whether it is the handcrafted genuine full grain leather back or the beautiful screen with its gentle curve, this is a phone that can impress anyone, and it could well go on to be the model that LG has been looking for to qualify as a mobile market leader.