This is one of the fastest Android phones available 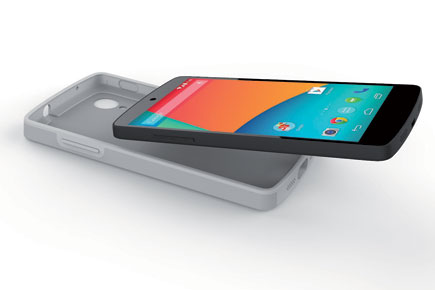 This is one of the fastest Android phones available

I was not a big fan of the Google Nexus 4 when it came out, but the new Nexus 5 impressive. Its large 5-inch full HD IPS screen with Gorilla Glass 3 is stunning, it runs the latest version of Android OS 4.4 code named KitKat, and is made by LG for Google.

If you are an Android purist or just someone looking for a rock solid phone, the Nexus 5 comes at a great price tag, though you will have to pay an additional Rs 1,000 odd if you are buying it in-store and not online. The phone weighs 130 gm, and fits nicely in your hand despite its large screen.

For capturing images, the phone’s 8 megapixel rear camera with optical image stabilisation allows one to take immersive 360° panorama shots, HDR shots and even full high definition videos. And for all those selfie moments, it has a 1.3 megapixel front camera.

Its built-in battery lasts up to 17 hours, and it is charged wirelessly. What I don’t like about the phone is its built-in speaker, though there is a 3.5 mm jack for headphones that you can use to enhance audio.

Nexus 5 has two microphones, which ensure that ambient noise is cancelled while making calls.

The Nexus 5 features a powerful Qualcomm Snapdragon 800 2.26GHz processor and an additional Adreno 330 graphic processor. These, coupled with 2 gigabytes of RAM and stock Android provide the phone with all the power you need. You can choose between a 16GB and a 32GB storage variant of the phone.

Unlike the Nexus 4, this phone has LTE support. Though this does not matter in India, if you are a globetrotter you can get high speed internet access on your Nexus phone. There is also dual band Wi-Fi, NFC and Bluetooth 4.0 on board.

Android 4.4 enables a couple of smart operations and the Nexus 5 takes full advantage of these features: a better Google voice search makes things easier if you like to issue voice commands, and its smarter caller ID looks up business listings and lets you know a caller even if the number is not in your phonebook.

Nexus 5 manages to deliver blazing fast performance, and at the current price point, this device is one of the ‘must have’ Android phones in the market.