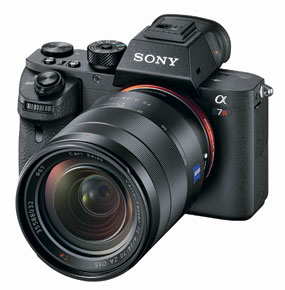 The Sony Alpha 7R II is a 42.4 MP mirrorless camera with an image stabilised full-frame sensor. Other specifications include: 5-axis image stabilisation, 4K video capability, 399 focal plane phase detection auto focus points, ISO sensitivity as high as 102,400, and an electronic view finder that claims to be the world’s highest magnification at 0.78x.

A higher count of megapixels need not mean sharper images, though the results on the Alpha 7R II are breathtaking. More pixels captured means you can easily crop the image and get the part of the shot you are most interested in. Sony uses a quick-transmission copper wiring layer that outputs data faster to ensure low noise and capture the finest details.

The 7R II has an updated shutter that cuts vibration drastically. The shutter is durable enough to last you more than 500,000 cycles. It also features a silent shooting mode so that you can shoot high-resolution images without any camera shake.

The 399 AF points cover 45 per cent of the total image area. This allows for quick autofocus, making it great for wildlife photography as well as quick action shots. The 7R II can shoot up to 5 frames per second in full resolution and deliver speedy response on the autofocus. Its 4K videos come out sharp and crisp, thanks to its 5-axis stabilisation. The 7R II comes with Wi-Fi and NFC connectivity options.

Overall, the Alpha 7RII is feature rich, making it Sony’s flagship camera. The megapixel war may be far from over, but in the long run we will see the advantages of having a BSI sensor.

The small refinements that Sony has made here are indeed adorable, including the provision of charging the camera using a USB, which allows for longer operational time. The only downside of these high-end Sony cameras is that accessories are hard to get in India.