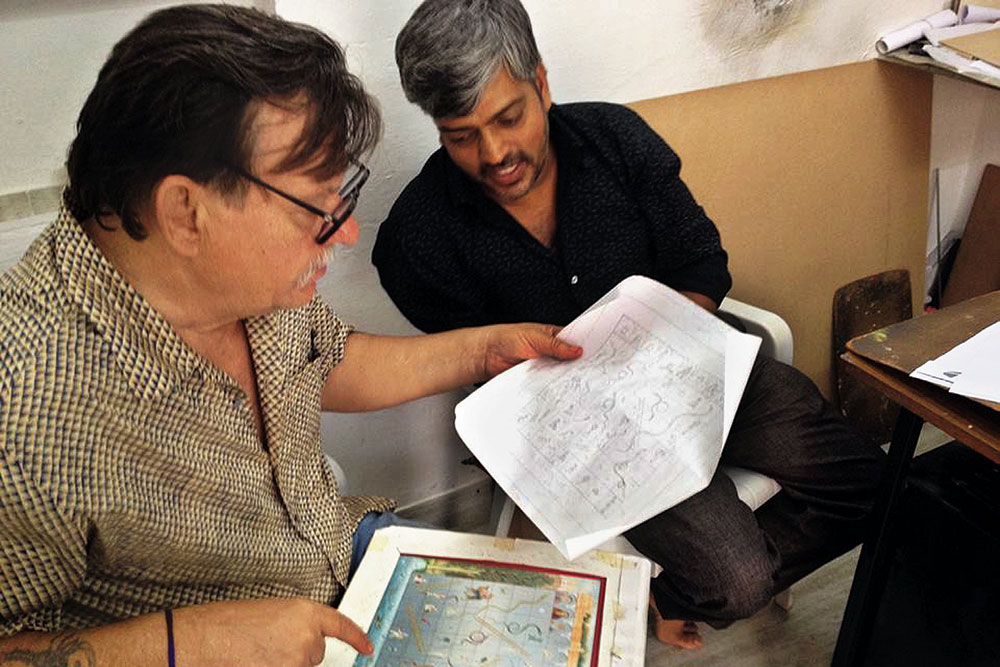 RAKESH VIJAYVARGIYA, professionally known as R Vijay, was born in 1970 in Udaipur to a Mahajan family originally from the nearby village of Railmagara. His father Mohan Lal Vijayvargiya migrated to Udaipur 6o years ago to work in a government office, and his grandfather, Prabhulal, served in the Maharana Bhopal Singh’s devasthan or temple department of the Mewar princely state. Prabhulal was later promoted and became assistant to the Diwan or minister and given control of five villages. One has to go to his great-grandfather to find any connection with the traditional occupation of Mahajans, i.e., trade. Though there is no history of art-making in his immediate lineage, Vijay’s granduncle is Ramgopal Vijayvargiya (1905- 2002), a renowned Rajasthani modern artist who was the principal of Rajasthan School of Arts and Crafts in Jaipur and the head of the Rajasthan Lalit Kala Akademi in the 1950s and 6os. He was perhaps Vijay’s first contact with a person who made a life in art; during summer vacations, when his uncle visited their village, Vijay began to wish that he too could become an artist. Because his uncle’s professional life was a success and his uncle was respected, Vijay lived in an environment in which becoming an artist was not seen as an outlandish choice.

Like many school children of his generation, he learned to draw on lined paper using a pencil and copied images of Hindu gods from the calendars that hung on the walls at home. Even at this early stage, Vijay felt he wanted to draw and contemplated how to change the image he was copying using techniques such as outlining and shading. Colour was not an option as it was very expensive, though it held great allure for him and he often daydreamed about what would happen if he mixed this or that colour with another.

It was somewhere between the ages of ten and twelve that he gained access to colours for the first time. He had sketched something in an exercise book and his teacher, whom he respectfully addresses as “Kanta Madam,” asked why he did not use colour, and having learned of the reason, she bought him wax crayons. From this point onward and for some years, Kanta Madam promoted his desire to draw and his work was shown to other classmates. This gave a relatively shy boy from an economically modest background, the first sense of arriving in the limelight on his own merit. For his tenth class state board exams (SSLC), Vijay had to copy a drawing the teacher sketched on the board or sketch an apple from life.

As ordinary as these experiences sound in the retelling, they had huge impact on Vijay as he became more and more aware that “art pulled him.” When his parents questioned the economic value of drawing and by extension opposed art as a career, he insisted that he would study and also learn to draw further. When he was in the ninth standard, he began to observe the paintings in Udaipu’s Jagdish Mandir where his mother, Ramkanya, participated in a bhajan (hymn) group. This gives him the opportunity to visit the area and look at the shops around the temple that sold miniature paintings of Radha and Krishna, royal portraits, birds, and flowers to tourists. A woman named Sita Bai became a friend of his mother’s in the hymn group and this led to Vijay meeting her husband, Sukhdev Singh Sisodiya, who painted pichwais or painted cloths, originally used as backdrops in shrines; elephants and horses on cotton and silk for tourists. They visited Vijay’s house on a festival day, and Sisodiyaji saw him making a drawing in an exercise book, which led him to invite the adolescent boy to study drawing in the evenings at his home. His parents’ fears were assuaged at least momentarily when Sisodiyaji mentioned that he had an uncle who was a government servant by day and drew at night.

AFTER TRAVELLING THE WORLD, WASWO CAME TO INDIA. IN RAJASTHAN HE MET VIJAY WHO GREW UP IN AN ENVIRONMENT WHERE BECOMING AN ARTIST WAS NOT SEEN AS AN OUTLANDISH CHOICE

The very next day Vijay went and started painting, and his curiosity (jigyasa) was aroused. He would finish school, eat lunch and rush to learn drawing at Sisodiyaji’s house. His new teacher always insisted that school was first and sought to wrap up teaching at six in the evening; somehow, Vijay extended his time there till ten at night. In the winters, he even turned up at six in the morning to learn drawing, which irritated Sisodiyaji to no end. This training went on for nearly five years, during which Vijay first practiced his lessons and only gradually began to assist Sisodiyaji in the colouring and the composition of paintings. His teacher’s paintings were coloured with commercially made, powdered pigments and sold in Udaipur’s bazaar.

Eventually, Vijay outgrew this repertoire and he began to desire to learn miniature painting. He mentioned this to a friend who knew an artist named Lakshminarayan Sikaligar who could teach him; Sisodiyaji gave him his blessings to move on with the caveat that he should first study, then paint. Vijay started college and began to study for a bachelor’s in commerce because a neighbour insisted he also prepare for bank service examinations, though he really only wanted to study art. His parents too by now had accepted drawing and he studied at the college during the day and went to Sikaligar’s to work till ten at night.

This is the context in which his technique became refined as he experimented with handmade colours and handmade papers and began to venture into art historical study by looking at books on Kangra and Bundi painting. After just one month, Sikaligar became happy with his learning, as his ability to mix colours and combine them improved. With this teacher too, there was a repertoire; love scenes, Mewar paintings that were in Udaipur’s Shiv Niwas and City Palace Museum, birds and Ganesha were standards. Vijay also assisted him at first but soon began to make his own paintings. There were no personal sales; Sikaligar would give him money on festivals and there was no charge for the teaching. Such an arrangement was quite common, especially for a beginning painter, but Vijay was aware that his parents’ financial condition was acute. After four years, Sikaligar gave him money and Vijay graduated; his teacher gave him his blessings to start his own studio, make paintings and sell them for himself

At this point, Vijay was 23 years old. He started a workshop in his house and began to work on ivory-like plastic, making hunting scenes and paintings of birds and flowers. Most of his buyers were Indians as his work went into the resale market in the shops of Bhagwanji, and Sachin Kothari, the art dealers, both of them in Udaipur, as well as at Shobaldji in Jaipur. He also sold his work at Rajasthali, the state handicrafts emporium, for approximately four years. This situation continued till 2005.

In 2006, Vijay came into contact with the expatriate photographer Waswo X Waswo (born Richard Waswo, 1953) through Rajesh Soni, the young artist who now works in the studio to hand colour the digital photographs that Waswo makes. If Vijay is self-effacing and works with a quiet kind of drive, Soni is more playful and street savvy. Vijay and Soni have known each other since they were children and they both share a love for making art; whereas Vijay spent his time mainly inside various studios learning from experienced painters, Soni spent time getting to know the tourists who started coming in greater numbers to Udaipur and the art they liked to buy. He also visited the studios of fellow artists, including Vijay, from whom he sought to learn painting.

Waswo X Waswo is an American-born photographer. After travelling the world with his life partner, he came to India, a place to which he has a familial connection. His books, India Poems: The Photographs (Gallerie Publishers, 2006), and Men of Rajasthan (Serindia Contemporary, 2011), are based on the experiences of travelling and living in India for sixteen years, more than nine of which have been spent residing in Udaipur. Almost from the beginning, Waswo has sought to collaborate with a variety of local artists, including Rajesh Soni.

He first worked with an art dealer in Udaipur’s old bazaar to illustrate poetry he had written in a folio titled Encounters. In this project, Waswo had his poems silkscreened on handmade paper and had their borders painted. Seven poems were illustrated, as was the cover. Next he commissioned this dealer to work on The Secret Life of Waswo X. Waswo, a boxed set of ten miniature paintings. It was a coincidence that the businessman and painting dealer with whom Waswo was working also was contracting work to Vijay, something he only found out about later. The dealer claimed that he did the painting himself but when Waswo brought to his attention the fact that each painting was quite different in style, he then confessed that various people had worked with him. The excitement of these initial artistic experiences and the quality of life in this Rajasthani town led Waswo to move there and set up a photography studio. He soon began to make digital prints of his photographs on archival paper and asked Rajesh Soni to collaborate in hand-colouring them. Around this time Soni said to him, “Do you want to know who is really doing your paintings?” and immediately introduced Vijay to Waswo. Soni had to translate for both of them to converse with each other for the first time.

(Excerpted from The Artful Life of R Vijay | Annapurna Garimella, with a preface by Kavita Singh | Serindia Contemporary | Pages 232 | $65 )