Vilayat Khan: An Instrument of Genius

Celebrating the extraordinary life and art of Vilayat Khan 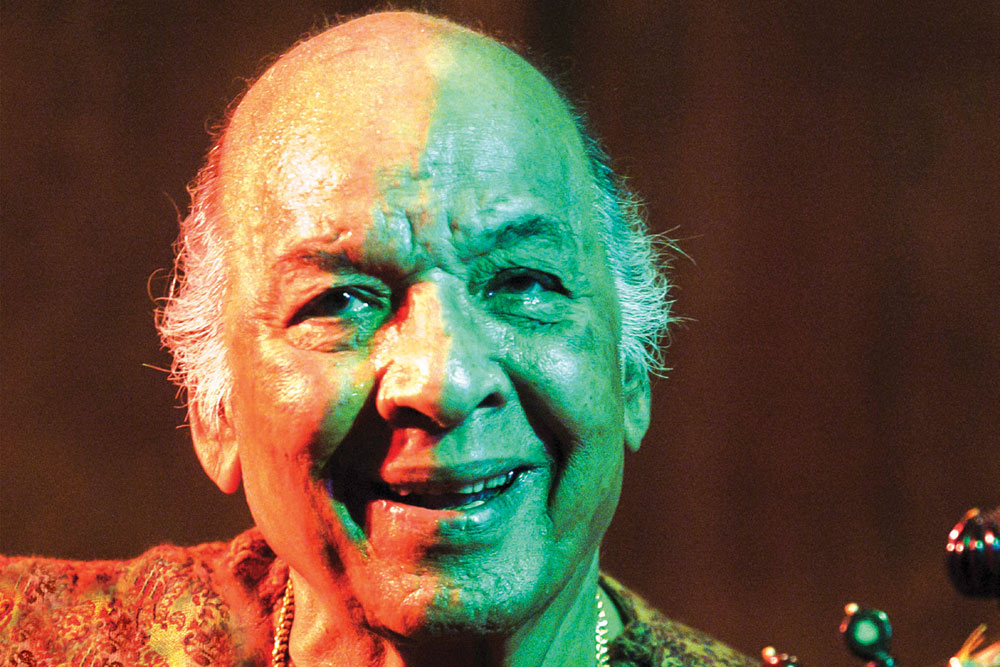 ‘Vilayat Khan’s sitar was not an
external prop; it had become an extension
of his body, another limb…. He was his
instrument, his instrument was him. This
is why his fingers often moved even when he
was not playing. His children and students
would see his fingers move or tap while he was
fast asleep. The music never stopped.’
—Namita Devidayal in The Sixth String of Vilayat Khan

THE TROUBLE WITH conventional biographies of geniuses is that the greater the number of facts packed in and more numerous the pieces of evidence marshalled by the biographer, the farther the subject seems to recede. This is a mistake that Devidayal eschews in her wonderful new book, The Sixth String of Vilayat Khan, an almost unputdownable account of the life and times of the sitar maestro, whose legacy gets undersold at times in a global narrative that invariably ends up championing his arch-rival, Pandit Ravi Shankar, as the greater artist. (In fact, going straight to the heart of this musical relationship, Devidayal begins her book with an epic concert in Delhi in 1952, when the young and handsome Vilayat Hussain Khan, only 24 years old, gate- crashed a performance of Ravi Shankar and Ali Akbar Khan during the Jhankar Festival. Sparks flew, and how. Eventually, Vilayat Khan was declared the winner, and later, Robu-da and Vilayat-bhai came to the agreement that ‘this should never happen again’).

At the outset, Devidayal clarifies her stance: ‘I discovered very quickly that writing about Vilayat Khan is a bit like chasing a hologram. Everyone has a different memory of him, a different take on the story… Therefore, rather than obsess about factual accuracy, I have tried to create an impressionistic fluid portrait— of a magnificent artiste and a fragmented human being…. It would be a mistake to regard this strictly as a biography because I am not a historian, but a lover of music and a storyteller.’

This intuitive approach is what makes all the difference. Devidayal’s acute understanding of classical music and her novelist’s eye combine to tell the story of Vilayat Khan in an unconventional narrative that achieves far more than a conventional biography might have, especially in reaching out to a non-specialised readership. After all, not everyone might know a two-note taan from a gamak, but almost everyone can appreciate the anecdotes around the life of a great artist, particularly the strobe- lit arc that, in Devidayal’s telling, gives shape to the twists of destiny, which turned Khan into an extraordinary performer as opposed to a merely accomplished one.

Khan was, of course, born to the art form. At a time when music was mostly passed on within families. Vilayat Khan was a scion of the Etawah Gharana, which is also called the Imdadkhani Gharana, after his grand- father, the legendary Dada Imdad Khan.

Dada Imdad Khan spent a lot of time in Bengal, where he had first been invited by members of the Tagore family, and where the new elite, products of the Bengal Renaissance, had begun to show more than a casual interest in Hindustani Classical music in general and the sitar in particular. Imdad Khan’s prodigious son, Enayat Khan, often called ‘Bengal ka Jadugar’, became a musician at the court of the Raja of Gowripur, and it is here that Vilayat was born in 1928. Eventually, Enayat Khan moved his rapidly growing family to Calcutta, where he acquired a beautiful mansion in Park Circus: Riyaaz. It is here that Enayat Khan began to teach his signature brand of music to his young son. At the age of eight, Vilayat opened the All-Bengal Music Conference at Madan Theatre with Raga Bhairavi, and soon after, the Megaphone Recording Company produced a 78 rpm, featuring both father and son.

However, tragedy struck the family. In 1938, Enayat Khan passed away at the prime of his musical career. (Over the course of his royal sojourns, he’d become an alcoholic.) Soon, money began to run out and fair-weather friends disappeared. And paradoxically, it is this, the struggles of the next few years—financial troubles and picaresque adventures in Delhi where Vilayat Khan landed up at All India Radio station, with only his kurta on his back, clinging to his sitar—that created a metaphorical furnace for the gold of his talent to be truly tested.

The biggest contribution to his art in these years was his mother’s. Basheeran goaded him to practise and found unique ways to get him the training he needed. In Devidayal’s nuanced narrative, Basheeran emerges as one of the most intriguing characters, part-tiger mom and part-Mrs Morel. I was reminded of this anecdote from The Music Room, Devidayal’s extraordinary first book: ‘Marriages were carefully and strategically arranged to ensure that the music remained within known territory…. The women’s knowledge of music was not to be taken lightly. Dhondutai told me a story about one of the senior Khansahibs (Alladiya Khan probably, or Jehangir Khan). When the old man used to sit down to teach his sons, he never announced the raga he was teaching them. He would just start with a slow rendition of notes, and then stop to take a drag from his sheesh pipe, after which the boys had to identify the raga and pick up where he’d left off. If they got it wrong, they were in trouble. Just after their father started, they would fight each other to run into the kitchen on the pretext of refilling his sheesh pipe so that they could grab their mother and get her to identify what was being sung. And she was never wrong.’

Basheeran was a living embodiment of this. Even though she came from a family of intrepid vocalists herself, and her brother and father were quasi-gurus to Vilayat, she forbade him from singing professionally—something he loved— because his father and grandfather’s legacy had been the sitar and, as the eldest, it was his duty to take that forward. Eventually, this made the young and rebellious Vilayat strike upon a unique artistic compromise: if he could not sing, his sitar would. And, subsequently Vilayat Khan reinvented the instrument, re-designing the modern sitar as it were.

As Devidayal traces the story of Vilayat Khan’s extraordinary life — warts and all—we get a sense of Khan’s obsessions (fine clothes and sumptuous feasts), his magnanimity (both charity and teaching) and his cruelty (that, at different times, drove a wedge between him and his beloved eldest son, Shujaat, who is one of India’s finest classical artists today, and his younger brother, Imrat.) We also begin to understand not only Vilayat Khan’s contribution to the post- Independence music scene in India but also how he shaped his own generation’s music, and understand why, ultimately, he left India to retire in Princeton.

Given that in India we hardly value the archival worth of ephemera—letters, posters, concert programmes, and that the only books available on music are academic ones (since training continues to be oral), it must have been difficult to research this book. Devidayal has used her imagination with sophistication in excavating Khan’s life from unique resources: conversations with people who knew him closely, both family members and students, photographs, archival material; but most of all, she has relied upon her own appreciation of his music.

Vilayat Khan used to say that a raga should be performed such that the audience—and the artist—must see it standing in front of them within a few minutes. If this rule were to extend to biographies as well, this one would certainly pass the Vilayat Khan test.