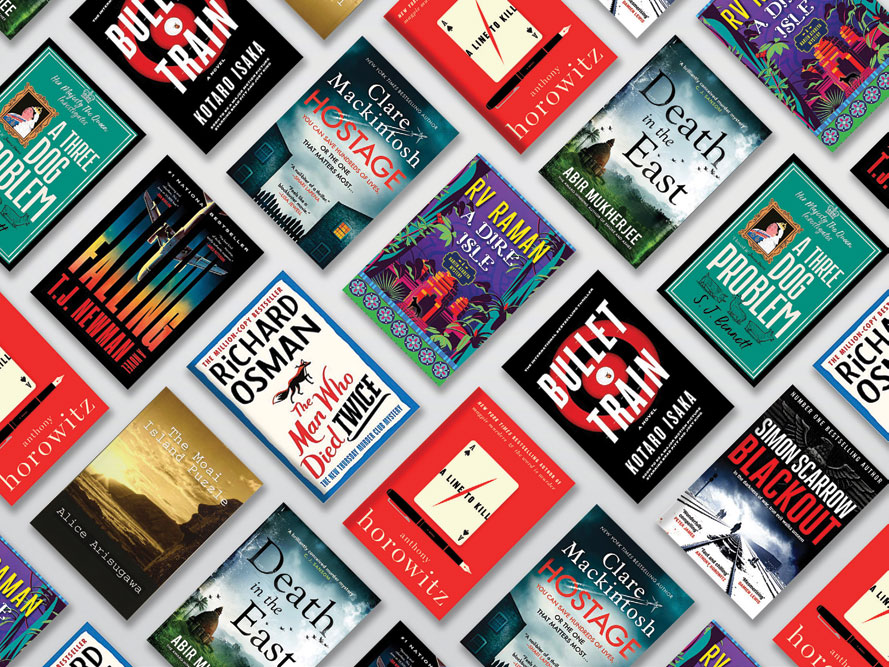 Hostage has the ingredients of a snappy thriller: a strong female voice, a hijack threat, and a moral dilemma of saving the child/family or 357 passengers. Mina is a flight attendant with World Airlines, whose marriage is going through a rough patch. Her five-year-old intelligent adopted daughter has attachment issues. Her babysitter leaves after warning Mina that she didn’t “deserve crap like this.” Her husband, Adam, a policeman, doesn’t refute her suspicion that he had an affair with the babysitter. By now, we connect strongly with Mina as she boards the first long-haul flight from London to Sydney. A man keels over and dies on the airplane. Mina finds a photograph of her daughter in his wallet, clicked that very morning. With it is a message to her: “Open the cockpit door to let in the hijacker or your daughter will die.” Mackintosh is a seasoned writer with a fine ability to craft rounded characters. For instance, as passengers board the plane, we see how flight attendants clock them into categories like a victim, troublemaker, etcetera. The events are narrated from the viewpoints of Mina, her husband, and a few passengers, but we don’t know which passenger/s is a hijacker. A lovely winter afternoon read.

Captain Bill Hoffman’s family is held hostage as soon as he leaves home to fly from LA to JFK. In the air, he receives a message and views his wife strapped to explosives. He can’t tell his first officer (whom he is supposed to poison with a mysterious white powder he finds in his suitcase) or the crew members that his choice is between crashing the plane or losing his family. What will he do? Will he confide in an old friend and flight attendant whose nephew is in the FBI? Will he throw the canister with toxic gas into the cabin to save his family? Or will he put his duty as a captain in charge of 143 souls first? Will he find the sleeper on the plane who is in cahoots with the kidnapper? Falling is a straightforward thriller, a debut by a former flight attendant, who gets the main components right. A competent, high-octane thriller.

Five assassins board a bullet train from Tokyo to Morioka. Each of them has a different mission. Nanao, who considers himself the unluckiest assassin, has to grab a suitcase and get off at the next station. Two more killers are after the same suitcase, and to make matters worse, someone has killed their employer’s (a mafia boss) son whom they were escorting. Then there is Prince, a psychopath who looks like an innocent schoolboy, who revels in manipulating the emotions of others and keeping them at his mercy. Chasing him is another assassin whose son is in a coma thanks to Prince. Isaka does a brilliant job of pinning these characters to the train and exploring each nuance of evil, giving the book a Dostoevskyesque aura. Prince expounds the philosophical debates on evil, by asking every person he meets on the train: Why is it wrong to kill people? Prince can be read as a metaphor for the evil desire to subjugate others. Despite being wily killers, the other characters are fettered by their assumption that a 14-year-old is innocent. We read on to find out who will make it to the last stop alive. Not surprisingly, it is a bestseller in Japan and is being made into a Hollywood movie.

Death in the East | by Abir Mukherjee (Harvill Secker)

A great blend of 1920s Indian history and mystery told in a dual narrative that moves between the early career of Calcutta police detective Sam Wyndham in 1905 Whitechapel and 1922 India. When an old flame of Wyndham’s Bessie Drummond is found dead in her room, constable Wyndham is determined to find her killer. In 1922 Assam, where Wyndham is battling an opium addiction in an ashram, he sees a man from his past, someone he thought was dead and out for revenge. When one of his fellow addicts is found dead, Wyndham has to call the only person he can trust to help him, his Sergeant Surrender —not Banerjee. The narratives move at a fast clip, as does the suspense, especially in the British setting.


Claire Mackintosh’s Hostage and TJ Newman’s Falling take place on an airplane, while Kotaro Isaka’s Bullet Train, as the title suggests, is set on a train. High-speed transport is a common setting for the best crime fiction books of the year

This is an excellent locked-room mystery on the lines of Agatha Christie’s And Then There Were None. Three university students, members of a mystery club, arrive at an uncle’s holiday chalet just when a typhoon is about to hit it. It is on a small island where the only other dwelling is at the other tip, and inhabited by an artist. They plan to solve a treasure hunt the student’s grandfather created before he died. The island has Moai figures looking in different directions, and the mystery club members think these are connected to the solution. As the bodies pile up, and the other guests hide secrets, the young sleuths race to figure out the motive, which is, not surprisingly, linked to the treasure hunt.

The Man Who Died Twice | by Richard Osman (Penguin)

Usually, authors suffer from the dreaded second-novel syndrome when their first book is a bestseller. Osman’s first book, The Thursday Murder Club, was a lockdown bestseller, partly due to a brilliant marketing strategy. But it was a bit of a let-down after the hype. Not this one. Osman writes with verve and has complete control over the twisting plot where nothing is as it seems. Coope’s Chase, the retirement village home to the Thursday Murder club and the four friends—a retired former spy, a retired nurse, a psychiatrist and a left-leaning political activist. They have to help the spy’s colleague and an ex-husband who is on the run from the mafia after stealing their diamonds. En route, they have to solve murders, retrieve stolen diamonds, combat a mafia middleman, a drug dealer and the MI5. It is amusing, intricate and satisfying as we hop heads and see how their unique skills help solve the case.

In the winter of 1939, a former race driver turned Criminal Inspector has to find a killer in Berlin who rapes and kills women during the forced blackouts. One of the victims, an actress, is the wife of a high-ranking Nazi and the former mistress of Goebbels. Inspector Horst Schenke of Kripo, who refuses to join the Nazi party but wants to serve his country as a policeman, finds himself in the crosshairs of SS and Army Intelligence rivalries. The gripping read highlights the non-political Horst’s moral dilemma in bringing justice to the victims while working for the Nazi government. The fast-paced atmospheric page-turner brilliantly evokes the winter of World War II Germany.

A Line to Kill | by Anthony Horowitz (Harper)

Anthony Horowitz’s fictionalised self and the star of his fictional series, former policeman Daniel Hawthorne arrive at a literary festival on the English island of Alderney. They join a motley crew of fellow writers—a chef, a children’s writer, a performance poet, a psychic and a war historian. They attend a party hosted by the owner of internet gambling sites, who also advocates a controversial power project on the island. A murder takes place while the party is going on, and Hawthorne is on the job, ably supported by Horowitz’s Watson. It was a pleasure to read the tongue-in-cheek humour and intriguing suspects with lots to hide in a traditional whodunit.

In the second of a charming series, the sleuths are Queen Elizabeth, along with her assistant private secretary, ex-soldier Rozie Oshodi who plays the Watson to the Queen’s Holmes. Set against the background of the Brexit referendum, a new Prime Minister, and the elections in America, the mystery begins with a question. Why is an oil painting of the royal yacht, hanging outside her bedroom for a decade, now in a Royal Navy exhibition without her consent? Rozie is put on the job to find out how it got there. A few poison pen-letters, forged art, a body in the swimming pool, mysterious courtiers, a gang of insider thieves spiriting away Palace items, and secret and derelict tunnels below Buckingham palace. Bennett captures the sensibility of a seasoned monarch, and gives us a great glimpse into the byzantine workings of Buckingham Palace. A must-read for fans of The Crown.

This is Raman’s second book with Harith Athreya, modelled on the sphinx-like Golden Age detective. Athreya is hired to investigate fraud among a team of archaeologists excavating on the Betwa riverbank near Jhansi. The story takes us into an Agatha Christie-ish archaeological dig with a ghostly spin and an ancient curse. Among the dig members are a familiar cast of characters. An attractive headstrong accountant whose boyfriend was recently fired by the dig’s head, a seasoned archaeologist who was superseded for the top job, and a local who bears an eerie resemblance to the ghost haunting the isle. When the much-loathed head of the dig is murdered in the haunted isle, Athreya has to figure out if the killer is supernatural or very much flesh and blood. Raman evokes an atmosphere of gothic dread for the reader and takes us into Agatha Christie territory set in modern-day India.