The Sword of Shivaji

Bringing the legend of the warrior king to a new generation 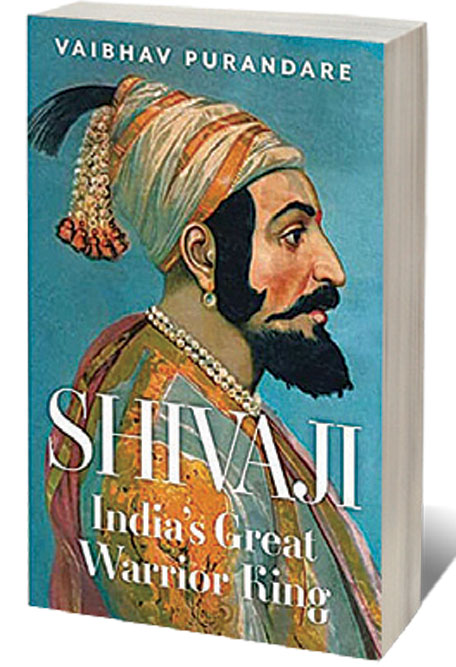 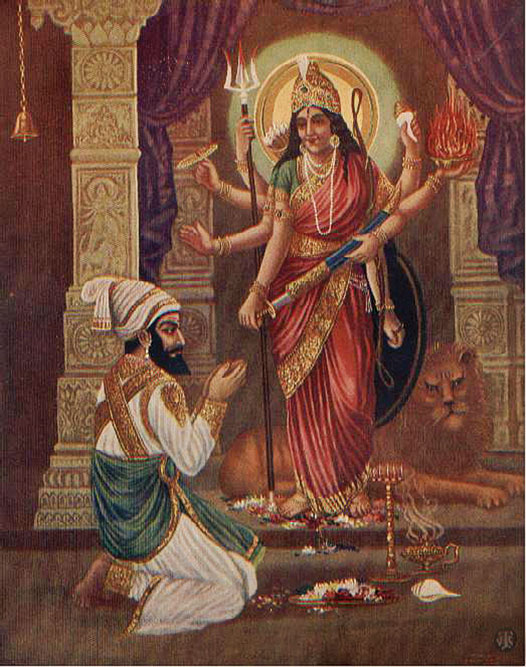 
SOMEWHERE IN THE 20th century, a print emerged of the first Maratha chhatrapati kneeling before a goddess. The depiction, since reproduced in stucco and film, has the devi present the king a sword. Legendary accounts about Shivaji, in fact, often feature the goddess, who advises him, urges him to action, and even uses her power to support him in crises. In keeping with this trend, then, the present of a sanctified weapon is not surprising. If anything, it adds to the heroic lore of Shivaji: a warrior fighting against the odds, with god on his side. But memory aside, history gives that same sword—named ‘Bhavani’ after the goddess—a less heady origin: it was purchased for 300 gold coins. And instead of descending from divine hands to the king’s, it was manufactured in Europe and originally the possession of a small-time chieftain, who agreed to make a sale of it.

Little details, such as the sword’s provenance, pepper Vaibhav Purandare’s Shivaji: India’s Great Warrior King. At just over 250 pages, excluding notes and bibliography, it is an easy read, and a short book—perhaps too short for a volume advertised as a ‘definitive biography’. Purandare is at his best when recounting Shivaji’s amazing feats. The chapter on his encounter with Afzal Khan—which ended with the general trying, mid-embrace, to stab Shivaji, and the latter disembowelling him—com­mands the reader’s attention. Similarly, a section on Shivaji’s daring attack on the Mughal emperor’s uncle, in his own camp, is gripping. Purandare builds up such scenes effectively, and it helps that his protagonist had an uncommon appe­tite for risk, stemming both from courage and a defiance of existing political norms. It is tough not to be in awe of Shivaji.

Oddly, however, the book begins on a relatively flat note. After a 15-page introduction, we find ourselves at the start of Shivaji’s story, narrated in a staid chronology: this was the year of his birth, these were his parents, this was the lie of the land, and so on. One cannot help but wonder if the book would have been bet­ter served structurally had it opened with one of the many dramatic moments in Shivaji’s career; that would have hooked the reader’s attention. Instead, the first 30-40 pages offer a tepid experience, not helped by a kind of literature review of existing work on Shivaji. In a book meant for a mass audience, this bit could have been accommo­dated at the end of the text. Purandare’s intentions are clear—to provide a sense of sources before focusing on storytelling—but the result is that the first part of the book makes a somewhat under­whelming impression.

I was also puzzled by some gaps. Though mired in controversy and violence from two decades ago, James Laine’s was the last major study in English on Shivaji as a historical icon. And yet there is no mention of his work either in Purandare’s introduction, or in the bibliography, when in fact Laine posed interesting questions for biogra­phers of the Maratha king. So too, while Purandare at some moments explains why he revises received wisdom (such as when he shows that an audience Shivaji had as an adolescent with the Bijapur sultan never happened), there are other times when no explanation appears. The Sabhasad bakhar (chronicle), among the first accounts on Shivaji, states, thus, that his conquest of Javali involved treachery; Purandare presents it as a regular mili­tary takeover but does not tell us why he rejects the other, popular version.

Purandare is, it also appears, more comfortable relating events from Shivaji’s life, but less in his element in interrogating the relationships and motivations behind these events. Shivaji’s son Sambhaji’s brief defection to the Mughals, for example, is covered but not explained in detail. Similarly, though people raised in Maharashtra have learnt of the influence his mother had on Shivaji, Purandare does not build on this—an unfortunate omis­sion, for Jijabai is an intriguing figure, effectively a single parent who raised her son despite her husband’s long absences. That Jijabai’s family had political loyalties opposed to her husband’s, and that some sources hint at resistance in her family even to her marriage should have inspired in-depth comment from her son’s biographer. This is also important be­cause Shivaji’s policy did not follow his father’s, who remained a loyal subordinate to the Bijapur sultan even as his son rebelled; was Jijabai the force behind Shivaji’s ambition?

There are also conceptual questions the book sparks: was Shivaji articulat­ing a Hindu-Maratha state, as Purandare tells, or a Hindu-Maratha kingship? That Shivaji elevated Hindu ideals of a pan-Indian, Sanskritic tradition in defining his political personality is clear. But was this a state-structure? What made it different from the sultanates, other than Maratha elites replacing a Muslim elite? Purandare himself notes that even under Shivaji, peasants had to part with up to half of their produce in taxes. The difference, he argues, lay in that Shivaji never went beyond the fixed proportion, whereas prior rulers took whatever they wanted—a line that scholars of sultanate-era Deccan might quibble with as a generalisation. It is true that by the time Shivaji was growing up, the region was in a bad way: but famine in the 1620s and stress born of the Mughal invasion were contributors, as opposed to textbook tyranny.


Vaibhav Purandare builds up scenes effectively. It helps that his protagonist had an uncommon appetite for risk, stemming both from courage and a defiance of existing political norms. It is tough not to be in awe of Shivaji

This is not to argue that bigotry was not spreading at the highest echelons of power among the local sultanates— something that parallels dynamics in the Mughal court also. In the Sivabharata, produced under Shivaji’s patronage we see this: if the Ahmednagar sultan in his grandfather’s generation is honoured as a dharmatma, his heirs are shown as op­pressive. So too in Bijapur, where Ibrahim Adil Shah II, who died shortly before Shivaji’s birth, endorsed Hindu gods, his successors pursued a more stringent Islamic identity. Still there were many Marathas—Shivaji’s father, as well as other prominent houses—who contin­ued to be invested in the sultanates, and derived legitimacy from them. Shivaji’s rejection of this, and his crafting in 1674 of a sovereign identity, is fascinating but has not been teased out by Purandare with all its complexities. The answers we get often seem simplistic, while not enough questions have been asked.

I was also disappointed on one other count. While Shivaji’s story is remark­able, parallels with the career of an older regional figure are hard to miss. Reference is to Malik Ambar, the African warlord, who for nearly a quarter-century stood between the Mughals and the conquest of the Deccan, dying four years before Shivaji’s advent. Like the latter, he too harassed the Mughals using guerrilla techniques; and decades before Shivaji’s sack of Surat, Ambar did the same thing. Indeed, in the Sivabharata, Shivaji’s court poet lavishes praise on this forebear, who is described as ‘wondrous in power’ and ‘brave as the sun’. Purandare mentions Ambar in passing but does not explore the tantalising overlaps in the careers of the two Deccani heroes. The very fact that Ambar receives such acclaim in the Sivabharata, suggests that Shivaji saw him as an inspiration—a proposition worthy of investigation.

Overall, then, Purandare’s is a mixed offering. It is readable, interesting, and a welcome effort to tell Shivaji’s story to a new, younger audience. But does it live up to its claim of being ‘the definitive biography’? The answer regrettably lies in the negative. The book also shirks one or two controversial issues (such as the caste debate during Shivaji’s coronation) and plays it safe—something that prevents the chhatrapati from emerging from that mould of predestined greatness and truly taking form as a singular human being, capable of imagination, boldness, determination, and vision. So, while this is the book we have, I could not help but wonder what more it could have been.