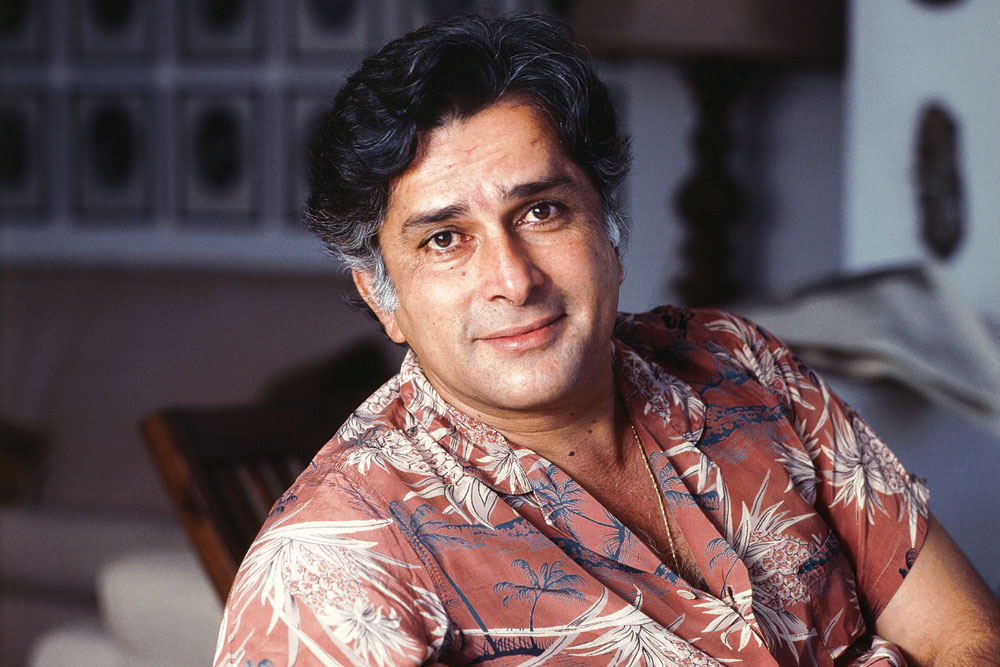 MY CHILDHOOD memories of Shashi Kapoor are mainly of ‘Amitabh’s favourite heroine’, as one waggish description of the time had it. Kapoor was the fair-complexioned second lead and occasional foil to the superstar in films ranging from those signposts of the Angry Young Man era, Deewaar and Trishul, to the fast-paced thriller Shaan and the goofy comedy Do aur Do Paanch. Through most of these pairings, he was a gentle, jolly co-star; it was scarcely believable that his Trishul character, the pampered younger half-brother Shekhar, could hold his own against Bachchan’s smoldering, forged-in-iron Vijay during a climactic fight scene.

In the early 1990s, there was the plump, droopy-eyed man apologising in a magazine interview for making a mess of his directorial debut Ajooba, and for letting his friend Bachchan down. As a young teen who had moderately enjoyed that Arabian Nights-style adventure, I was a bit puzzled by Kapoor’s contrition: Ajooba was a disappointment to those who had been led to expect something with cutting-edge special effects, but it was more fun than Bachchan’s other forays of the time, such as Toofan and Aaj ka Arjun. That apart, it was unusual to see a well-known film personality publicly admitting failure.

I was struck by Kapoor’s turn as a modern-day Karna in Kalyug—a film I went out of my way to seek out because of a Mahabharata obsession—and dimly aware of his pencil-moustached ‘serious’ roles in films like New Delhi Times and Vijeta. Though not one of my very favourite actors, he was always a pleasing personality, and even at a time when I was more interested in macho men and less so in sensitive, dreamy-eyed heroes like Shashi and his nephew Rishi, I realised there was something special about someone who could easily shift between the mainstream films I liked and the somber ones by Shyam Benegal and others.

In more recent years, there have been poignant firsthand sightings—the old, ailing version of the matinee idol, sitting quietly in a chair in a cranny of Prithvi Theatre. All these Kapoors (or perhaps one should say ‘Shashis’) can be found in Aseem Chhabra’s Shashi Kapoor: The Householder, the Star. The first thing to be said about this book is that it is—given its subject—likeable on the eye. It is also slimmer than you may at first realise— the actual text occupies around 180 pages, which includes chapter endnotes as well as lots of black-and-white photos interspersed with the writing.

The opening chapter, ‘A Star is Born’—in which vignettes from Kapoor’s early life are provided in the hurried style of childhood scenes unfolding in the first 15 minutes of a 1970s Hindi film—and the last, ‘Things Fall Apart’, are biographical in the conventional sense of that word. The others are packed with information about the many cinemas Kapoor was associated with: mainstream Hindi movies ranging from Yash Chopra’s Dharmputra in 1960 to the same director’s Silsila more than 20 years later, the ‘middle’ or ‘parallel’ films of the 70s and 80s, the collaborations with Ismail Merchant and James Ivory, beginning with The Householder in 1963 and other international productions such as Conrad Rooks’ Siddhartha and Stephen Frears’ Sammy and Rosie Get Laid.

Kapoor appeared in dozens of—largely forgettable—commercial Hindi films in the 1970s, but Chhabra emphasises his achievements as an Indian actor who attained some international recognition (with critics of the stature of Pauline Kael mentioning him in reviews) decades before the word ‘crossover’ became commonly used and Irrfan Khan and Priyanka Chopra went global.

The book records the many influences on the actor: the egalitarianism of his father, the long-term emotional mooring from his early marriage to Jennifer Kendal, the work ethic of her family of theatre performers, and how all these factors forged a man who was a team player even when he was a celebrity

The book does a good job of recording the many influences on the actor over the decades: the socialist egalitarianism of his father Prithviraj Kapoor; the long-term emotional mooring provided by a romantic relationship formed early in his life—with Jennifer Kendal, whom he married in 1958 when he was 20 and she was 25; the work ethic of Kendal’s family of theatre performers; and how all these factors helped forge a man who maintained the discipline of a good repertory actor—a team player—even at a time when he was a glamorous celebrity. But there is also the suggestion that in an environment that could be inimical to idealism and discipline, these qualities sometimes came back to bite Kapoor: he was a conscientious producer who had his directors’ and actors’ interests in mind, but this may have made him an easy target in a mercenary industry.

There are some nice anecdotes too, such as an amusing description of Geoffrey Kendal—Shashi’s father-in-law, initially disapproving of his relationship with Jennifer—setting ‘stern restrictions on his daughter’, standing stiffly as she tries to hug him; here is a Shakespearean actor from England behaving like a patriarch in a Hindi film. Or the one about the writer Ruth Prawer Jhabvala being so resistant to getting involved with filmi people that she pretended to be her own mother-in-law on the phone when Merchant- Ivory tried to contact her. (A shy literary novelist inadvertently playing out the sort of slapstick scene that you might find in a Hindi-film comedy—like the Shashi-starrer Pyaar Kiye Jaa.)

My one reservation about the book has to do with a bias: I like my film literature to convey an immediate sense of the author’s relationship with his subject. Chhabra does some of that (when he recounts his wedding day and an argument with his wife just before they chanced to see Kapoor from a distance at the Taj Mahal Hotel in 1985), but he does it sporadically, as if he is shy to put too much of himself in the narrative. There is a brief reference to watching Heat and Dust as a student in Manhattan and ‘feeling exhilarated that India and a majestic Shashi were on a giant screen in New York City’, a mention of skipping a school play rehearsal to watch Sharmeelee at Delhi’s Regal Cinema, and another one of being moved by Siddhartha which he saw at an art-house theatre in London. Taking these instances, here is someone experiencing three different sorts of Shashi Kapoor films in different parts of the world. I wish he had elaborated on these experiences and what they meant to him, and that there were fewer review-reports of Kapoor’s films.

That said, if you want basic information about Kapoor’s life, this book serves the purpose. It brings out the dichotomy between an actor-producer who could be discerning when it came to projects he believed in (such as Junoon and Kalyug) and the man who was called ‘taxi’ by elder brother Raj Kapoor because he had signed on so many films at once that he was working four or five shifts a day. (Shashi’s daughter Sanjna tells the author her father sometimes had no clue about the stories of films he was acting in.)

Reading about this contrast, I was reminded of Kapoor’s first scene in Merchant-Ivory’s 1970 film Bombay Talkie. Playing a Bollywood actor, he speaks with a visiting English journalist (played by Jennifer) in clipped English, sounding sheepish and defensive about the sort of work he does in Hindi cinema. But then a metamorphosis occurs—a shot has to be taken, he goes and stands on the keys of a giant typewriter created for a song sequence, asks for his cue and starts prancing around unselfconsciously. In a matter of seconds, we get to see two different performers—two avatars of one of Hindi cinema’s warmest, most loved personalities.