The Reconstructor of Mythology 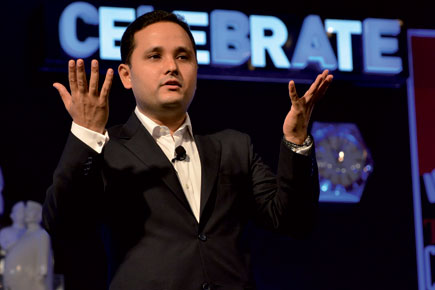 
There is frenzy outside Om Bookstore in a relatively empty mall in Noida as a restless mob waits in a semi-circle for 38-year-old author Amish Tripathi to finish obliging photographers after a book signing session for his last book in the Shiva trilogy, The Oath of the Vayaputras. Suddenly, a middle-aged woman decides she cannot take it any longer and cuts through the crowd to hand Tripathi a bouquet of flowers and pose for a picture. “I am your biggest fan,” she declares. Tripathi, visibly embarrassed, thanks her before he gets engulfed by a fawning crowd. The author of the fastest-selling series of books in the country—his publisher claims 1.5 million copies in print and gross retail sales of over Rs 40 crore—is the new poster boy for popular fiction in India. With a claimed Rs 5 crore advance for his next series, the highest ever paid to an author in India, and a movie version of the trilogy’s first book, The Immortals of Meluha, in the making, everything is getting a little surreal, admits Tripathi. “I worked for over 14 years in the financial sector—I was an insurance guy. Nobody wanted to listen to me, and look at me now. All the attention I get is amusing to me,” he says, biting into a sandwich, his first meal of the day.

He reminds one of Chetan Bhagat before he thought of himself as a star. And of Paulo Coelho. A strange mix. But amiable enough, a person unaffected by his evident success and all the media attention. “I am well aware of the transient nature of fame, I can’t afford to get attached to it. I want to stay away from everything other than my writing so that I remain 100 per cent committed,” he says.

Tripathi, who never dreamt of being a writer, says that this new-found passion is thrilling. He considers his books a reponse to a higher calling than mere narrative fiction writing and solemnly believes that Lord Shiva actually chose him for the task. “I have no coherent explanation of what I wrote and how I wrote it. All I can say is that it was instinctive.”

This is exactly the attitude that appeals to his fans and grates his critics. He claims indifference to the latter, but admits that he gets irritated when people assume he is a right-winger just because of his religiosity. “I sincerely feel that religiosity and liberalism go hand in hand. But I feel in India, the meaning of being liberal has gotten lost. If you say you are liberal, most times people assume that you are a leftist. For me, it just means that I have the ability to respect another person’s point of view,” he says. This ability he says he acquired while living in Mumbai in the immediate aftermath of the Hindu-Muslim riots of 1993. It was during that troubled phase that he says he became an atheist. “Writing my books helped me rediscover my faith,” he says.

His grandfather, who was a Sanskrit scholar, a pandit and a mathematician in Varanasi, Uttar Pradesh, has been his biggest subconcious influence and taught him that “Mathematics was the language of the gods”. A graduate in Mathematics himself, he later went on to do an MBA from the Indian Institute of Management in Kolkata even though he secretly dreamt of being a historian. “But I couldn’t afford it. In the India I grew up in, it was a stupid decision to opt for such a career.” And if not for the success of his books, he would still be working at IDBI Life Insurance, a job he quit in 2011 to focus on his writing. “I am happy with my life right now, and isn’t that what everybody aspires to? Mine is a good life and I do what I love the most, write. What more could I ask for?”

The trilogy first started as an essay after a discussion with his family about the true nature of evil. It is a ‘philosophy’ he feels has resonance in today’s world, even if it is part mythology and part reconstruction. “Philosophy is the core of my being. If I have to fake my philosophies, I might as well not write. I wanted to imagine Shiva as a human being that walked the earth and eventually rose to the status of a god because of his karma,” he says. Lord Shiva was his natural choice of protagonist because he views him as both a “rebel and a democrat” and feels that is the reason most young people in India identify with him. “All of us aspire to be like him. Insolence and rebellion is attractive because that is what leads to creativity,” he says.

When he first set out to publish Immortals, almost all the publishers he approached rejected him, 22 to be exact. “They felt that these were religious books and had philosophies that had little chance of succeeding.” It was his friend and now agent Arun Bahri of the bookshop Bahri & Sons in Delhi who first suggested he self-publish it. “The only reason I chose to follow through was because I was committed to my book.” Within a week of its release, it was on bestseller lists. The Chennai-based Westland Publishers then signed him on, and he has been on a roll ever since. From creating video trailers to a soundtrack, Tripathi has tried to make the Shiva experience as real for his fans as it was for him.

He is now working on another series in the fantasy genre, the topic of which he is yet to disclose. Asked if his fans would be pleased with it, he says, “Please don’t use the word ‘fans’, I find the word condescending. Let’s just call them readers,” and rushes off for a TV interview.

The Progressive in Paris

The pleasures and pains SH Raza faced while in Europe