When a renowned free market economist takes to translating an entire epic from the original classical Sanskrit, his passion can only be marvelled at. 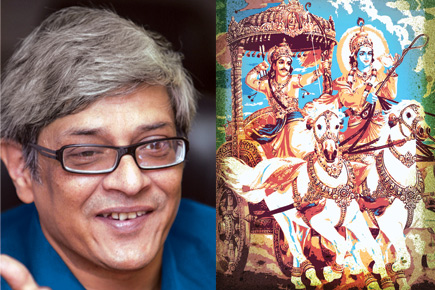 When a renowned free market economist takes to translating an entire epic from the original classical Sanskrit, his passion can only be marvelled at.


In the last couple of years, there has been a surprising surge in interest in The Mahabharat, the greatest epic in the world. Books based on the epic are turning out to be a commercial goldmine for publishing houses in the country. In 2009, India’s largest English language publisher Penguin released CEO-turned-philosopher-at-large Gurcharan Das’ examination of the epic, The Difficulty of Being Good. While the book received mixed critical response, it was a runaway bestseller that surpassed most pre-launch expectations. Now, Penguin has followed that up with what can easily be described as one of the most ambitious Mahabharat projects of the 21st century in India. The publisher will bring out a 10-volume unabridged translation by well-known economist Bibek Debroy of the epic based on the Critical Edition compiled at the Bhandarkar Oriental Research Institute in Pune. The slickly produced first volume hits bookstores across India this week, and Debroy promises to churn out a new volume every six months.

The size and scope of Debroy’s endeavour is mindboggling, to say the least. The Mahabharat is the most voluminous epic in world. It runs into more than 80,000 couplets or shlokas, which makes it eight times as voluminous as the two Homeric epics Iliad and Odyssey put together. The Bhandarkar Institute’s Critical Edition, for instance, was one of India’s great nationalist projects—to many, even comparable to the Nehruvian idea of constructing those ‘Temples of Modern India’. It took the Pune-based institute almost half a century, from 1919 to 1966, to compile this authenticated text, collated from 1,259 manuscripts, produced by a board of scholars that sought to eliminate latter-day add-ons and unify the epic across various egional versions as well.

Why would a free market economist, whose previous professional assignments have included the secretary generalship of a North India industry lobby, apart from leadership of several think-tanks, turn his attention to a colossal epic written in classical Sanskrit? That too, one which has perhaps been translated so very often? And with no formal training in the ancient language?

Debroy says that contrary to popular perception, unabridged translations of The Mahabharat are rare. There exist only five translations, and none of them written in the 20th century. Indian contributors include Kisori Mohan Ganguly, a somewhat tedious and repetitive translator, who started off in 1883, followed by MN Dutt.

The Clay Sanskrit Library’s version does not use the Bhandarkar Critical Edition, but other sources, and it doesn’t adhere to the chronology of the parvas or chapters of The Mahabharat. Chicago University’s efforts were started by JAB van Buitenen, but he died midway through the project, and are now being revived with a new band of translators at work, including well-known Indologist Wendy Doniger. “The primary reason for venturing into yet another translation is not just the vacuum that exists, but also the dissatisfaction with other attempts. This translation is better and more authentic, but I leave it to the reader to be the final judge,” says Debroy.

Each of Penguin’s new translated volumes would come with the same cover image, with only the colours changed; and after every third volume, there will be a combination hardcover collectors’ edition.

“The Mahabharat is much more real than The Ramayan,” continues Debroy, explaining his interest in the epic, “And therefore much more fascinating. Every conceivable human emotion figures in it, which is the reason it is possible to identify with even today.”

What’s more, Indology has been a lifelong passion for Debroy, having proven himself to be an accomplished translator from Sanskrit in the past. “While the research interest in The Mahabharat remained since my younger days, I got sidetracked into translating. Through the 1990s, there were abridged translations of the Maha Puranas, Vedas and Upanishads. I found that I enjoyed translating from Sanskrit to English, and since these volumes were well received, perhaps I did do a good job,” adds Debroy.

That the effort will prove rewarding is a given, feels the publisher. “Penguin is a mass-market publisher, and Debroy’s background in attempting this is more as an interested amateur. That helps the books’ broader appeal and doesn’t restrict them to academic circles,” says R Sivapriya, commissioning editor, Penguin.

Debroy’s use of accessible language and descriptions has something in common with C Rajagopalachari’s evergreen abridged translation aimed at ewcomers to the epic.

Describing the fight between Bhimasena and Bakasura, the demon who feasts on a cartload of food and one villager daily, Debroy writes: ‘Reaching the forest where the rakshasa lived, the immensely strong Pandava began to eat the food himself and called out the rakshasa by name. Then on hearing Bhimasena’s words, the rakshasa was greatly enraged and came to where Bhima was. His body was huge and his speed swift, as if he was breaking up the ground. His forehead was furrowed into three lines and he bit his lips. On seeing Bhimasena eating the food, the rakshasa dilated his eyes and angrily said, ‘Who are you stupid one, who dares to eat these offerings meant for me, that too in front of my own eyes’…’

Despite how straightforward his translated prose is, there is hardly a place where Debroy doesn’t do justice to the everlasting linguistic beauty of the original.

Earlier translations faltered on this count. For instance, the one by KM Ganguly uses fairly archaic language, and the lay reader is likely to be put off by repeated usage of phrases such as ‘O bull of the Bharata clan’ or ‘O the puissant one’. In other cases, the reader is likely to get lost in the labyrinth of footnotes and cross-references.

Volume I of Debroy’s series comprises most of the Adi Parva, in which much happens before the Kauravas and Pandavas actually arrive on the scene. It covers the origin of the Kuru clan; the birth of the Kauravas and Pandavas; the house of lac; Draupadi’s marriage; and ends with the Pandavas getting the bifurcated Hastinapura kingdom. Debroy’s lucid and nuanced retelling of the original makes the masterpiece even more enjoyably accessible. Pity, he’ll only bring the next one out six months hence.