An empathetic portrait of Karunanidhi 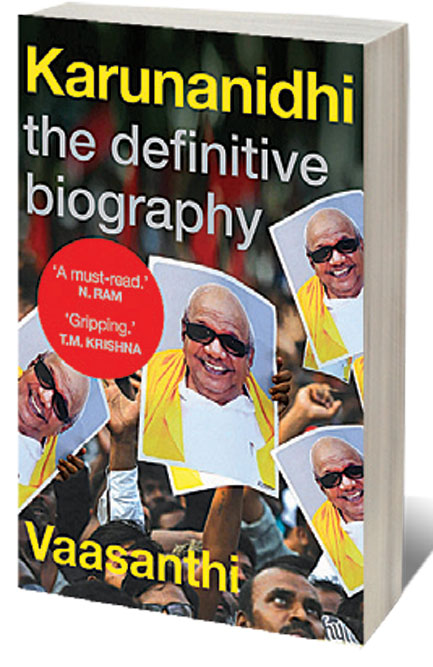 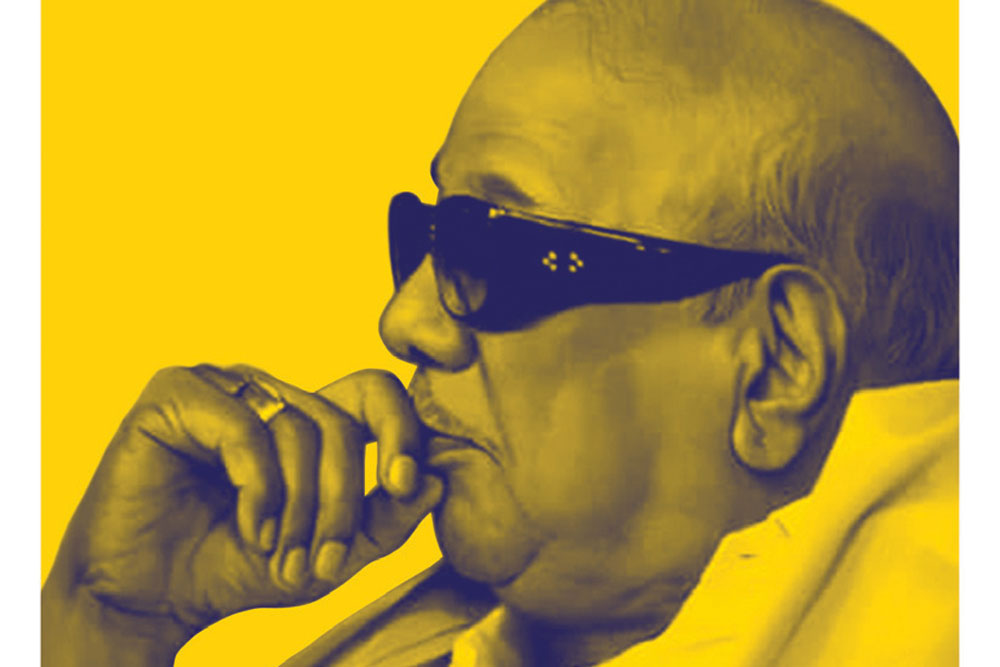 
IN HER RECENT BIOGRAPHY of Muthuvel Karunanidhi, a political leader beloved of millions, Vaasanthi narrates the story of his life along two strands: the politician and the artist. The leader of his party, the Dravida Munnetra Kazhagam (DMK), for about 50 years and five times Chief Minister of Tamil Nadu. The artist who rebelled against an unjust social order and enjoyed careers as scriptwriter, journalist and writer. Through these pursuits, he expressed his love for the downtrodden and passion for the language and literature of Tamil country. His life was informed by a constant interplay between his politics and his predilections, both personal and artistic.

After an early start in the Dravidian movement writing propaganda articles and plays to spread its ideology, Karunanidhi charted his own course inside the DMK, writing fiery scripts, leading agitations and holding influential posts. When Annadurai died in early 1969, Karunanidhi had little difficulty in outplaying his rivals and succeeding his mentor as Chief Minister. While his political journey was rife with challenges, he proved equal to them at every turn.

The falling out with MG Ramachandran, which kept him out of power for 13 years, electoral defeat by Jayalalithaa three times and bouncing back each time, having his government dismissed twice and yet keeping his party alive—Vaasanthi recounts each of these episode from Karunanidhi’s vantage, with great empathy and a keen sense of drama. The sad saga of Tamil Nadu’s entanglement with the insurgency movement and brutal civil war in Sri Lanka is portrayed with high skill. In a situation where no stakeholder acted in good faith, Karunanidhi comes out as a man who was sincere but ineffective, and as a result, betrayed over and over again. The chapter on MK as ‘Player on the National Stage’ chronicles his relationship with national parties and their leaders, particularly the Indian National Congress, and his brief, unfortunate alliance, forged under trying circumstances, with the Bharatiya Janata Party Government under Atal Bihari Vajpayee. The political acumen with which he repeatedly positioned Tamil Nadu as a prime beneficiary of co-operative federalism, a principle long cherished by the DMK, makes for fascinating reading. If Tamil Nadu has been consistently among the top five states in the country in terms of economic development, it is in no small measure due to Karunanidhi’s wisdom and political ingenuity.

At the state level, Karunanidhi was an administrator par excellence. He helped improve the lot of the marginalised. His first two terms as Chief Minister witnessed an unprecedented expansion of the transport infrastructure in the state. Under his watch, improvements were effected in public housing, public health infrastructure and services, public distribution system and education infrastructure. He also increased reservation benefits for the backward classes and passed legislation providing reservation of 33 per cent seats in local bodies for women. He was also responsible for Chennai’s early advances in the knowledge industries by setting up the necessary infrastructure.

On the personal front, Vaasanthi provides a close account of his early life, and his relationships with family, friends and associates. His friendship with MGR, with its ups and downs, is described in detail. The tragic imprisonment of his daughter Kanimozhi in connection with the 2G scam investigation has Karunanidhi cutting a Lear-like figure. In the end, the man who read voraciously, wrote film scripts, commentaries on classical Tamil texts and retold the exploits of subaltern folk heroes, signed off by writing the script for a television serial on Ramanujar, the 10th century Vaishnavite saint, shortly before he died on August 7th, 2018.

This is a critical and empathetic biography of an important political figure, meticulously researched and put together with fine narrative skill. While the biographer is always in sympathy with her subject, it doesn’t prevent her from a scrutiny of his frailties and his various political acts of commission and omission, which have had serious consequences for the state and its people. While Tamil Nadu is far from being a perfect place, it has indeed come a long way under the leadership of this gifted, mercurial and passionate politician. For readers across India with an interest in how politics can shape society, this story of ‘Kalaignar’ Karunanidhi is well worth reading.