The Hoot and Call of Books 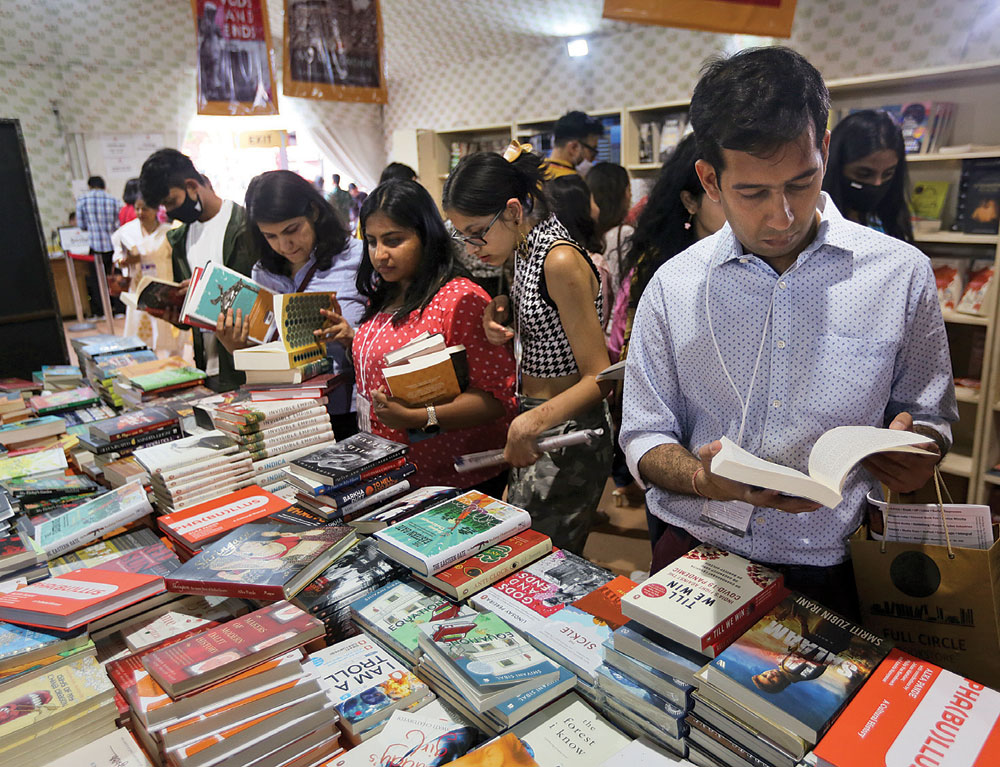 
PERHAPS, THE MOST photographed celebrity at the 15th Jaipur Literature Festival (JLF) resided in a scrawny tree just near the entrance of the author’s lounge. He saw the world. But not everyone saw him, unless they chose to turn up to look. With his sharp hearing and acute sight, he heard and saw more than most. He was a Spotted Owlet who was privy to all the proceedings below and around him. As speakers walked in and out of the lounge, many eyes turned up to him. When he was not there, a sigh of disappointment would waft into the wind. If he could speak, oh, the secrets he could reveal.

He would notice the various tics of the speakers and performers. He would discern the common traits between authors and his own species. Like him, the author-artist is largely a solitary creature who most often lives alone, or in pairs. Owls and authors tend to be creatures of the night, who have all-seeing eyes. They are considered to be all-knowing, but can also be petty and vicious and are known for taking over the nests of others. When they come together they form a parliament. Once a subcommittee has been identified, most stay loyal to these and seldom seek out others. Many of the speakers, of course, have been friends for decades and the Owlet would see them take to each other like dandelions in the wind. Old friends would gather and wander off together to find a moment of communion. The Owlet was also witness to all the egos and gossip. He would find it hard to keep track of it all, given that he had two years of doings and undoings to catch up on.

For many attendees and speakers, this is half the fun of an on-ground festival. On one hand it is the exalted world, which is in the higher pursuit of ideas and words and language and revelation, and on the other it is simply about money and business, and whose book is selling the most, who is getting it on with whom, and who said what to whom. The Owlet would realise that it is this mingling of the ‘high’ and the ‘low’, that is the fun of a festival.

WHETHER YOU enjoyed JLF 2022 depended on how you like it. Do you revel in the size and scale of the Kumbh Mela? Or do you prefer the buzz of drawing room soirees? Do you like the shimmy of a peak-hour Metro commute? Or do you prefer a stroll? The recently concluded JLF (March 10-14) replaced scale with intimacy, where there was once a scramble, now there was space.

Over the last decade, JLF has flaunted itself as the “world’s biggest free literary festival,” with the crowds and speaker line-up endowing this reputation. But in its 15th year, like everything else in 2022, JLF had to contend with a new reality. Since it could no longer go just for bigger, it had to go for smarter as well. Held for the first time at Hotel Clarks Amer, after 14 years at Diggi Palace, the “world’s biggest hybrid literature festival” hosted around 600 speakers, artists and performers, and included both offline and online events.

JLF 2022 proved what we’ve known for the last two years, the need for face-to-face interaction and the inadequacy of a solely online world. The online sessions have their own merits, as they are less performative and more natural. But they are no substitute for on-ground and in-the-flesh events.

It is all too easy to dismiss literature festivals but the forced break reminds us why we need them—to give flesh to the skeleton of ideas, for the solitary act of reading and writing to be embodied. It is at a literature festival, where a college student can ambush authors like William Dalrymple and Manu S Pillai, and ask with confidence, “Didn’t Aurangzeb reach south India?” It is where fans will demand selfies with authors claiming, “I spent 15 hours reading his book, he can spend a minute for a photo.” It is at a festival where you might suddenly find yourself in a queue with a Nobel prize winning author.

A festival is a notoriously hierarchical place where the colour of your lanyard determines your access to different festival nooks, but in its best moments, a literature festival is where readers lay claim to authors, and where authors respect and acknowledge this, knowing all too well, that it is readers who make them who they are.

A few years ago, every edition came to be known for that one defining controversy, this edition ran smoothly enough, except for a kerfuffle at the very start. The loudest murmurs of dissent arose in the evenings when authors found themselves without drinks at hand.

WITH MANY OF the international celebrity names appearing online—such as Abdulrazak Gurnah and Damon Galgut—the on-ground festival had a more Indian texture. Ten sessions on Indian art history (a first for the festival) showcased the scale of our arts and brought together leading art historians such as BN Goswamy and Partha Mitter.


JLF 2022 proved what we’ve known for the last two years, the need for face-to-face interaction and the inadequacy of a solely online world. The online sessions have their own merits, as they are less performative and more natural. But they are no substitute for on-ground and in-the-flesh events

The joy of JLF has always been the variety on offer in terms of speakers and content. Writer and playwright Farrukh Dhondy emerged as the Duke of Anecdotes just as writer Shobhaa De could be anointed the Countess of One Liners. On and off stage, Dhondy regaled listeners with accounts about everything from adaptations in Hindi cinema to Ronald Reagan’s past. Shobhaa De held forth with student activist Gurmehar Kaur, telling her to live life unapologetically and on her own terns. Smriti Irani’s session on her book Lal Salaam was as packed as expected. The Minister of Women and Child Development’s novel was also the bestseller at the bookshop at the festival grounds. A young volunteer at the shop said that Irani’s Lal Salaam and Neena Gupta’s Sach Kahun Toh: An Autobiography were vanishing off shelves. Often described as the “all-time JLF Favourite,” Shashi Tharoor lived up to his reputation, with readers and fans flocking to be in his orbit. Abhijit Banerjee’s session on his recent book Cooking to Save Your Life, illustrated by Cheyenne Olivier, revealed the Nobel prize-winner’s proclivity for food where the ingredients get an opportunity to sing. The session humanised and intellectualised food.

TRADITIONALLY ALWAYS held in January, a month of mellow sunshine and bracing nights in Jaipur, March often blazed too bright. If JLF is about books and ideas, it is also about seeing and being seen, showing face and seeing face, meeting and greeting. For years, JLF has showcased winter fashion, where the shawls and jackets, boots and coats were in full display. This time around, the mulmul and chiffon saree, chikankari kurta and sleeveless dresses edged out the silks and wools. Many of the gentlemen arrived with their linen coats and Nehru jackets and stoically sweated through it all. JLF has always been a festival of winter sun, where the most popular stall is the kulhad chai sold by moustachioed men. This time around the scramble was for shade, with the sole air-conditioned hall becoming the most popular hub.

If JLF has its retinue of fans and followers, it also has its critics and naysayers. And while there will always be the lacklustre session, the garbled conversation, the obvious omissions, there will also be moments of light and sparkle, both on and off stage. Personally, the moments I find most meaningful are seeing young readers buying bags of books at the shops. On a warm Saturday afternoon, a girl, perhaps in college, seemed to doze off in a chair beside me. I didn’t really see her pay much attention to the conversation on stage. But then she suddenly awoke and went to her Amazon account on her phone and bought a book, The First Lady: One Secret Can Bring Down a Government by James Patterson. I ought not to have been spying on her phone. But like the Owlet, I had a useful vantage point. And it is in these moments—when you encounter readers—that you feel fortunate to be at the Jaipur Literature Festival.