The biggest of ideas can emerge from the smallest of desires. In the case of Facebook, it was about a geek who wanted to be popular with the girls. 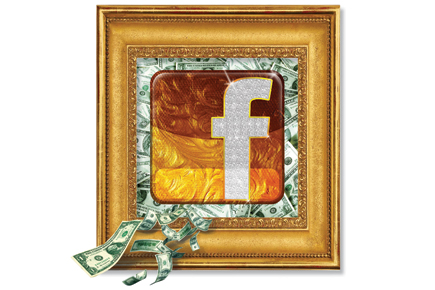 The biggest of ideas can emerge from the smallest of desires. Facebook is one of them.


At the end of the day, it’s about the girls. It always is, isn’t it? The great wars, the epic tales, the world changing ideas, the billion-dollar Internet revolutions. How to get the girls and how to get laid. So, in that sense, this book could well have been called ‘How to Get Laid and Make a Billion’.

This then is the story of Facebook, the phenomenon that has became as essential as our morning cuppa. A geek with the programming skills of a superhero and the conversational skills of a doormat wants the girls milling around. So Mark Zuckerberg fiddles around with his comp, gets a smart, hedge-fund type friend to back him and boom, our social lives are never the same again. In the process, he rubs a couple of Harvard superdudes and an Indian techie (Divya Narendra, a hedge-fund analyst who co-founded ConnectU) the wrong way, catches the eye of a Silicon Valley maverick and parts ways with his best buddy. There’s even an irritated Lawrence Summers (the guy who thinks women can’t do maths) in a cameo. It’s not just a billion-dollar Internet business idea, it’s also a surefire Hollywood hit. In fact, the movie is already on the floors, with Kevin Spacey as producer.

Ben Mezerich is good at such campus capers. Except that his books are not set in Sweet Valley High and the kids are all Ivy-League superachievers. Yet their ambitions are eerily similar: getting accepted at Harvard’s legendary social clubs is a big deal, as is popularity with the opposite sex. Earlier, Mezrich had pulled off the successful Bringing Down the House about a bunch of MIT friends who clean out a Las Vegas casino. That too, was made into a film, 21, starring Kevin Spacey and Zac Efron.

However, the language in this book is pedestrian and there is no fleshing out of characters. Zuckerberg, for one, remains distant. Brilliant, driven, cold and emotionless. That geek in sweatshirt and flip-flops who used to sit in the last row in college. You never really get to know him, where he comes from, what drives him, or even whether he liked any of those girls he met after Facebook. But perhaps, that’s because Zuckerberg never met Mezrich. So this book, one assumes, was the result of his Harvard old boys’ network and Facebook friends list.

Yet, the idea is seductive, even if the writing embarrassingly ordinary. And you know everybody will be talking about it on Facebook.