A BBC journalist wades into Mughal history to paint a picture of the fifth emperor in miniature detail, up close and thrilling 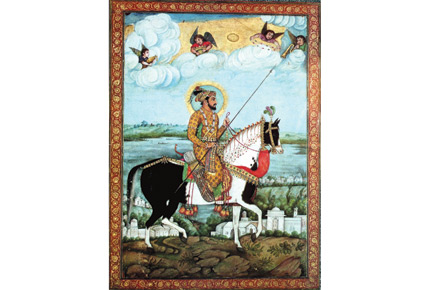 A BBC journalist wades into Mughal history to paint a picture of the fifth emperor in miniature detail.


The story of Kurram Shah Jahan fascinates. He is at once the patron of the arts, the creator of the great Taj Mahal, the renegade rebel prince on the run and the fratricidal Mughal.

Fergus Nicoll, a journalist, has waded through Mughal history to paint a portrait of a man who has far too often been romanticised. He uncovers little by little, almost like a Mughal miniature, the picture of the man who ruled India for three decades. Unlike one of the Padshahnama miniatures (the official, commissioned history of Emperor Shah Jahan’s reign), this is not a symmetrical, perfect portrait.

The book points out a most extraordinary fact, that Emperor Akbar took more personal interest in prince Khurram, as Shah Jahan was called in his youth, than is natural for a grandfather in those times. Shah Jahan was taken away from the Jahangir household almost as soon as he was born and raised by a wet nurse close to Akbar.

On all important occasions in the prince’s life, such as his weighing ceremony or the first archery lesson, it was Akbar and not father Jahangir who participated as the master of ceremonies. Intriguing, all this.

The book’s merit lies in its ability to bring fascinating characters to life. It chronicles the changing nature of the Mughal Empire, especially the palace intrigue and the Islamic character of rule. After Akbar’s enlightened reign, the Empire started taking on an orthodox Islamic character and became dangerously oppressive by the time Emperor Aurangzeb ascended the throne.

So you have the menace of Aurangzeb, the style of Shah Jahan, the intrigue of Noor Jahan (the power behind Jahangir’s throne), and the wilted promise of Aurangzeb’s brother, the great Dara Shikoh. In other words, a tale of blood, lust and the ultimate stakes of ruling the Mughal Empire.

As you read the book, these fascinating characters are woven with stories of battle strategy and court chicanery. There are sections that describe the great cities of the Mughal Empire, namely, Agra, Kandahar, and Delhi, which were melting pots with British, Portuguese Chinese, Abyssinians, Dutch, French, and Italian visitors mingling in a court set by formality of the Persian tradition.

The book also underlines the limits of Mughal power. Especially the debilitating and costly campaigns in the Deccan against the Shia kingdoms of Bijapur, Ahmednagar and Golconda. It was actually a great game played by the Shia Persian Empire to keep Mughal interests in the North threatened, and thus, never really allow them to exert their full force upon the three southern kingdoms.

Finally, there is the story of the Taj Mahal. Told in a way that makes the endeavour one of both monumental grandeur and abiding sadness.

This is a book, to take a quote from it, for readers who are ‘Thirsty travellers in the desert of history’. Go buy it if you are one and quench some of that thirst.