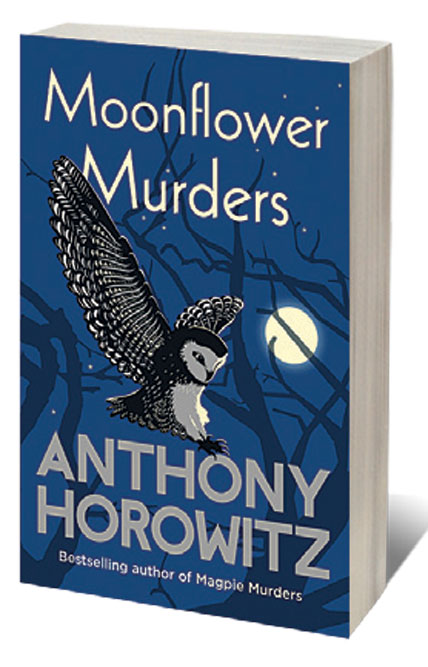 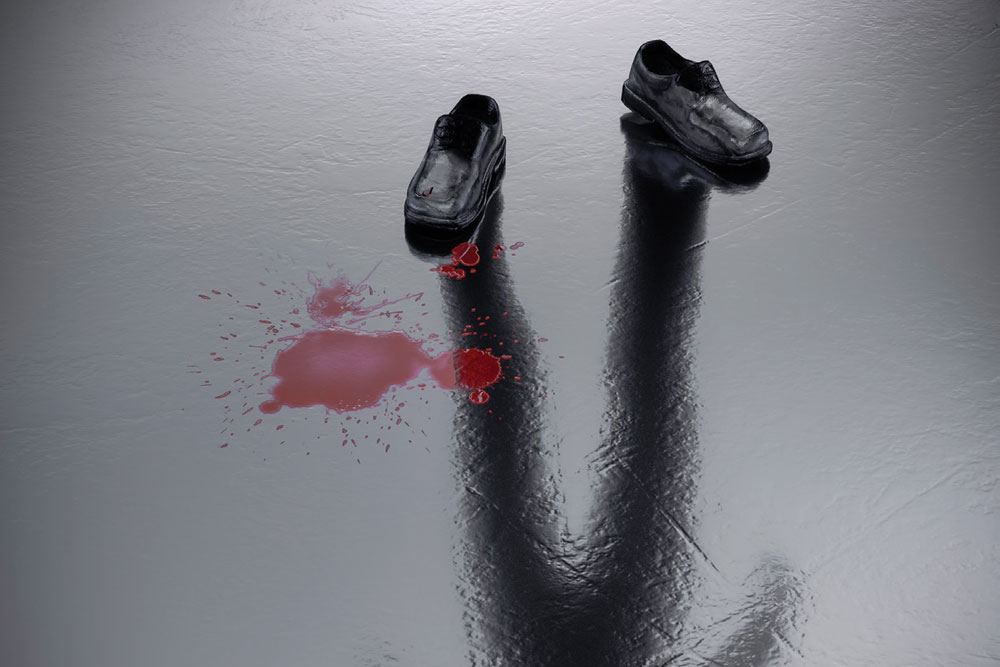 
CAN YOU LEAVE your past behind or will it somehow come back to haunt you? That’s the question tackled by Anthony Horowitz in The Moonflower Murders. Susan Ryeland has left her publishing career and is now the co-owner with her long-time boyfriend of a hotel in Crete. One of the hotel guests, the Trehearnes, have a strange proposition for her. If she will come to their boutique inn on the Suffolk coast and investigate their daughter’s (Cecily) disappearance, they will pay her £10,000. Cecily had read one of the books Susan had edited—the third Atticus Pünd novel by the late Alan Conway. Conway had based it on a murder of an advertising executive (Frank Parris) in the inn eight years ago on the wedding weekend of Cecily and Aiden MacNeil. Just before she disappeared, Cecily had called her parents to say that the Romanian handyman who was charged with Frank’s murder was innocent, and that she knew the identity of the killer. Susan, who is fed up of the tavern business and misses the book world, takes the case. She begins interviewing the suspects who include Cecily’s hostile sister, a grieving husband, a strange nanny, the victim’s angry sister and brother-in-law.

Horowitz excels in entangling us in a fiendishly clever mystery whose solution lies in a vintage mystery (which I preferred), also part of the book. In the Atticus Pünd (modelled on Hercule Poirot) novel is the solution to Frank’s murder and Cecily’s disappearance. Lots of red herrings, anagrams, unreliable witnesses and all the usual stuff that makes for a ripping and clever yarn.

EIGHT DETECTIVES HAS the perfect setting in our present world of fake news, untruths dressed as truth told by unreliable narrators/politicians. It is a charming and clever ode to the classic Golden Age cozies. Here too we have a set of crimes within a larger mystery like a matryoshka nesting doll, that speaks to the bones of the perfect mystery novel.


Julia Hart, a young editor, arrives on a remote island in the Mediterranean to meet and convince a reclusive author (Grant McAllister) to republish a mystery he wrote 30 years ago. The mathematician turned author has a theory that a mystery structure can be explained by four ingredients: two or more suspects, one or more victims, a detective or detectives, and a killer or a group of killers. The only condition is that the killer must come from the group of suspects. ‘The best mysteries were the ones where there was an absence not of the perpetrator or of their method, but of meaning,’ says Grant. Clues are not important—‘Go through any murder mystery and delete all the clues; you’ll still have a murder mystery,’ says Grant. In an interview, Pavesi repeats this sentiment: ‘Clues should be as banal as possible so the solution to our puzzle hinges on something so ordinary it couldn’t possibly be of interest to anyone.’

In the mid-1940s, Grant had worked out the rules and written seven perfect detective stories to demonstrate them. As the editor reads and discusses the eight stories with the author, she is struck by several inconsistencies in the stories, and the links with the murder of a famous film star Elizabeth White in the mid-1940s, which itself was called the White Murder. What part of these stories are based on facts and why did Grant leave England and come to this remote island then, she wonders.

Is there one truly satisfactory ending to a murder mystery? After the clues, victims and suspects appear on the pages, are we satisfied only when one person is marked as the killer? Or is it that for each of us that satisfactory solution may be different?

Eight Detectives is a wonderfully atmospheric novel with clean and crisp storytelling. The elegance of the narration is matched by the intelligence of the plotting, and the integral link between the settings (deserted island, a manor house) and the stories (families ruled by a terrifying matriarch, poisoned drinks and chocolates, vanishing weapons, bodies in the attic). Very assured writing for a debut author who is a mathematician by training. The math is insignificant though and removing it would not have changed the novel in any way, which was a bit surprising.

The craft lies in misdirection, in picking the solution that in some ways seems most unsuitable to the story, but in other ways fits perfectly, says Julia. It made me wonder if there is one truly satisfactory ending to a murder mystery. After the clues, victims and suspects appear on the pages, are we satisfied only when one and only that one person is marked as the killer? Or is it that for each of us that satisfactory solution may be different?

An FBI agent (Gwen Mulvey) shows up at the doorstep of his Old Devil’s Bookshop in Boston with the list.

Someone has been recreating and carrying out murders based on the list. Someone who knows Mal, and who has been to his bookshop. In at least three unsolved cases, there may be a link to the list and Mal knows why. Mal is not going to tell her because it would reveal his own dark secret. Can he help, she asks? He agrees because if he can’t stop the killer, his secret will be outed. Thus begins the cat-and-mouse game with the killer who blithely carries on with the murders.

As we see things from Mal’s point of view, we realise that he is strangely detached. The closer he gets to people, the more they begin to recede into a fog, and the less he understands them, he tells us. It describes the way the reader is beginning to feel about Mal who may be an unreliable narrator. We learn about his wife’s death—her car went off a cliff while she was returning from her lover’s house, a lover who has been supplying her with cocaine. The lover too is subsequently killed in a brutal attack but the protagonist is nowhere near that scene. As the bodies begin to pile up, we realise that the victims are linked to Malcolm, and the killer is playing a grisly game. Revenge is a dish best served lukewarm. It is another splendid ode to the mystery genre even if the denouement is not as satisfying as one had expected. The game, and the links between the fictional mysteries and Mal’s life make it worth a Sunday afternoon read.

THE 937-PAGE tome with Private Detective Cormoran Strike, the wounded war hero turned detective, and his partner, Robin Ellacot who are hired to solve a cold case is book five of the series by JK Rowling in her crime writer avatar as Robert Galbraith. You need to have muscle power and tummy fat to hold this book. If only she’d listened to her editor and lopped off a few hundred pages, it would still have given her fans great pleasure.

A doctor (Margot Bamborough) disappears on her way to the pub from her surgery, after seeing her last patient. No body, no sighting and a badly botched-up police investigation. The policeman in charge of the case is in the midst of a nervous breakdown and begins thinking in star signs, black magic and pentagrams while investigating the case, which makes for a very peculiar set of notes. After he is put out to pasture, it is already too late. The police suspect a serial killer of having murdered her. All this occurs in 1974. Forty years later Anne, her daughter hires Cormoran to investigate her mother’s disappearance. The suspects include the staff (the receptionists, a nurse) and partners (a misogynist doctor) in Elizabeth’s practice, her husband who is now married to the nanny, a former boyfriend and a couple of patients who had come to see her on the evening she disappeared. As they track the suspects and piece together Elizabeth’s personality and preoccupations, the duo is also tackling their own private demons.

Cormoran is battling emotional upheaval in his personal life—his aunt who had brought him up has terminal cancer, and his rockstar father, who had ignored him for most of his life, now wants to make amends. Robin too is in the midst of a messy divorce, grappling with her attraction to Cormoran, and warding off the smarmy advances of a sub-contractor at the agency.

Despite being set in the present era, the book has an old-world charm that comes from Cormoran and Robin’s examination of their values, which harken back to the Golden Age of detective fiction. Questions of friendship, loyalty, what it means to be a parent or a son, societal expectations of a woman as a wife and mother rather than as a detective (for Robin) all play off these older values. Galbraith has a saga-like ability (reminded me of MM Kaye) to pull us into the lives of these characters. The book sketches the emotional landscapes extremely well, creating in the process depth and vividness, and drawing out the simmering tensions between Robin and Cormoran. It gives a fine spine to the tome.

Some parts of the book, however, are tedious and could have done with an editor’s touch. Such as where the investigators try to make sense of the police inspector’s notes of star signs and pentagrams and a lot of mumbo jumbo connecting the suspects to these astrological signs.

Galbraith’s sense of what evil is, remains tethered to the concept that evil is unredeemable, that an evil person cannot be saved. That’s why the denouement in this book and in the previous ones can be seen as being unsatisfactory by some. We expect a valid reason for a murder but in the crimes tackled by Galbraith, the validity becomes questionable when evil is seen as a quality that is not amenable to reason. He does a good job of hiding the killer among the suspects, an element that sets a good mystery apart from an average one. Despite its size, Troubled Blood is a breezy and satisfying read, leaving me agog for the next book in the series.