Ramachandra Guha on the thrills of research, the insecurity of academics and their love of jargon, and why he doesn’t take holidays 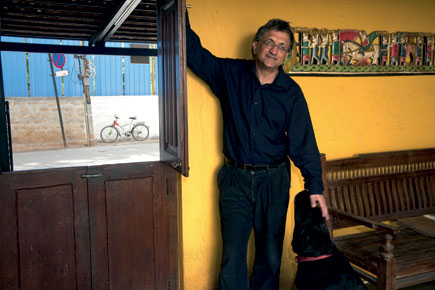 Ramachandra Guha on the thrills of research, the insecurity of academics and their love of jargon, and why he doesn’t take holidays


Ramachandra Guha is one of India’s best known public intellectuals, an academic who writes regularly in newspapers and magazines. He has also taken up the responsibility of writing an accessible version of our modern history: there is the bestselling India After Gandhi (2007), Makers of Modern India (2010) and a forthcoming biography of Gandhi. Also a cricket lover and writer, he has recently authored the book A Corner of a Foreign Field (2003), which has won shining reviews.

A I write every day from about nine in the morning to one in the afternoon. In 1995, when I began to write full-time, my son went to school and my young daughter to playschool. My wife runs an office, so she was away as well and the home was quiet from about nine to one. That’s when I developed this writing schedule. During this time, I don’t check emails, don’t take phone calls. Once I’m done, I take a printout of whatever I’ve written and reflect on it in the afternoon, while I’m catching up with the newspapers.

A I have a study. In this study, I have two or three things around me, the keepsakes of people I admire. One is the autobiography of an extraordinary doctor, who was one of the most selfless and compassionate people I knew. There’s nothing really important—some pieces of art and my computer. I don’t believe in too many writing rituals.

Q Before the computer, did you write your books in longhand?

A Of course, I wrote longhand. My first two books were written longhand. But for the past 12 or 13 years, I’ve been writing on the computer. But I still take notes by hand. I don’t like to take my laptop into the archives.

Q How is writing on the computer different from longhand?

A It is much less stressful on the fingers. I found the computer a great aid—everything is offset, you don’t have to type it all over again. It’s just convenient. I guess it’s a personal thing. You still have novelists who write or claim to write by fountain pen.

Q One of your great passions is Hindustani classical music. Do you listen to music when you write?

A I can’t listen to music when I’m writing, but I listen to it in the evening. After a stressful day of writing, I put off the lights and listen to it for an hour, sometimes more. Often, I find it useful to unwind before going to bed, to prepare myself for the next day’s writing.

Q Research is a big part of your books. How do you go about it? Do you research a little bit and then write, or do you finish the research before you sit down to write?

A I finish the bulk of the research before I sit down to write. For a book like India After Gandhi, I did about 80 per cent of the research before I started writing. Research imposes a different regimen—it’s the whole day, not just the morning. You may have a short period of time. A year-and-a-half ago, I was in Israel for a week. I had located some rare Gandhi material there, but the lady who owned it wouldn’t let me photocopy it, or take it out of her house. This meant that, from 9 am to 7 pm, I would be in her house just taking notes. I couldn’t go to Jerusalem or Bethlehem, all of which I’d hoped to do. I was in Bombay a few weeks ago, working in the archives, where every minute was spent taking notes. Research is a very different, intense process.

Q Is research, for you, one of the most rewarding parts of writing?

A In some ways, more than the writing. The material you discover, the unusual stuff you come across. For my Gandhi biography, I discovered handwritten letters by Gandhi which no one had seen before. It’s thrilling.

Q What are the most interesting places your research has taken you?

A Israel was definitely one. I was in Haifa, an old Arab town now completely taken over. My first book on the Chipko movement took me all over Uttarakhand. My Verrier Elwin biography took me to the Northeast and central India. For my Gandhi biography, I’ve been all over South Africa.

A Unless there is some sort of crisis in the family or a Test match in Bangalore, I’m always thinking of my work. I am, in that sense, rather obsessed. Even when I’m travelling, my current project is working itself out in my mind. I don’t take holidays. My family is very accommodating. We were in the Nilgiris recently, but even during a vacation, they understand that I may devote two to three hours to my work.

Q How important is social life for you as a writer?

A I’m very close to my family, so a lot of my social life revolves around them. I don’t like late nights and tend to stay away from dinners. What I like is meeting people in small groups, ideally one-on-one. Even when I go to a place like Delhi, I never go to parties. I do my research, meet a friend for lunch, sometimes meet a friend for dinner. Meeting people in small groups is much more interesting to me. I’m not a recluse but I don’t live it up either. Then there are other factors, like I don’t drink alcohol.

Q Orhan Pamuk once said that only four or five books would last a hundred years. And in his fifties, he is constantly asking himself—is he writing one of those five books? Do you feel that?

A Absolutely. I’m now getting to that stage where there are more years behind me than in front of me. That’s one reason I don’t socialise. There are half a dozen books I want to write and I don’t think I’ll be able to write all of them. Bangalore is nice in that way, because I’m able to lead a quiet life. There are not many book parties happening, nothing much to distract you.

A I like writing accessibly, and clearly. Many academics write only for themselves and the more insecure they are, the more jargon they use. Anyone in my field— history, sociology, anthropology, literature… it’s not like physics and mathematics. Even the most complex results of your research can be communicated lucidly. Sometimes, writing in the newspapers helps academics become better writers, even better scholars. As for the reverse, some of the finest journalists in India never wrote books. Someone like KN Prabhu, for years our best cricket writer, never wrote a book. Likewise, we have outstanding analysts of foreign policy or commentators on economic issues. The challenge of writing a large, complex work is something journalists should undertake at least once in their life.

Q How do you manage the three genres—columns, longer essays and books? Llosa once said that he kept Sundays for journalism and the rest for his books.

A I do a fortnightly column for The Telegraph, where I may not always comment on contemporary issues. That leaves me the rest of the month for my book. Longer essays are more impulsive. I recently wrote a long personal essay on Oxford University Press in Caravan. I had written on the Ramanujan controversy in my column, but then I wanted to write a longer piece on the decline of this great publishing house. But it’s the columns and books that need the scheduling. Essays are not more than one or two a year.

Q How many drafts of a book do you do?

A It depends a lot on the project. My Verrier Elwin biography went through five or six drafts, because I’d never written a biography before. Generally, I think through an entire book before I start writing. While I’m writing, I continuously redraft. So I’m constantly reshaping and refining the prose. Once I do the entire manuscript, it may go through one or two drafts.

Q Who do you show your early manuscripts to?

A I show it to a few friends, like the sociologist Andre Beteille and a British biographer called David Gilmour who has written on Curzon and Kipling. It is very important not to show your draft to too many people. You must live with it yourself, be your first and most consistent critic. Sometimes I show a few chapters to specialists. For India After Gandhi, I showed the last few chapters to Mahesh Rangarajan because, to my mind, he knows the politics of the last 20 years better than anyone else. Of course, I’ve had a great amount of help from editors down the years.

Q Among editors, which are the ones you have most enjoyed working with?

A I’ve worked with so many editors over the years that it would be unfair [of] me to name just one person, except maybe my first editor Rukun Advani. He gave me the confidence that I could write books.

Q Which writers have influenced you?

A Ultimately, you make up your own style. I have written about some of the writers I admire—the historian EP Thompson, the naturalist M Krishnan. Often, they have not been very well-known people. Among the famous writers, the one writer I read the most was Orwell. But I have probably not read Orwell for 20 years now.

Q What are you reading currently?

A I just finished reading two excellent books on Burma. One is a very good biography of Aung San Suu Kyi by Peter Popham. The other is a book called Where China meets India by Thant Myint-U. I went to Afghanistan six months ago and find myself getting more and more interested in the neighbourhood.

Q Do you read fiction at all?

A When I was a student, I read a lot of fiction. Then for a long time, I was so absorbed in my research that I stopped reading fiction. A few years ago, I realised that as someone living in the world, I had to read more than just history and politics. I choose mostly to read novels not set in India. I have been reading McEwan. Right now, I’m reading Mahfouz. I read about 8-10 novels a year.

A Fiction offers great insights, but it doesn’t influence my work in any way. The work of a biographer was once described as [that of] an artist under oath. I can’t make up stuff. I’m also not someone who overdramatises the narrative. There are no musts and maybes in my work. ‘As she was standing on the deck and the winds were blowing, she must have been thinking’—some non-fiction writers and historians have that style. That’s not the way I work. I’m an old-fashioned historian.

Q Finally, if you had to name just one book on India, what would you pick?

A I think a vastly underrated India book is Bill Aitken’s Seven Sacred Rivers. Aitken is a Briton who’s lived his entire life in India. He’s travelled all over India on a motorbike. He knows the country far better than most Indian writers, including myself. Seven Sacred Rivers is a little gem, an extraordinary portrait of India.