A graphic statement of life and art 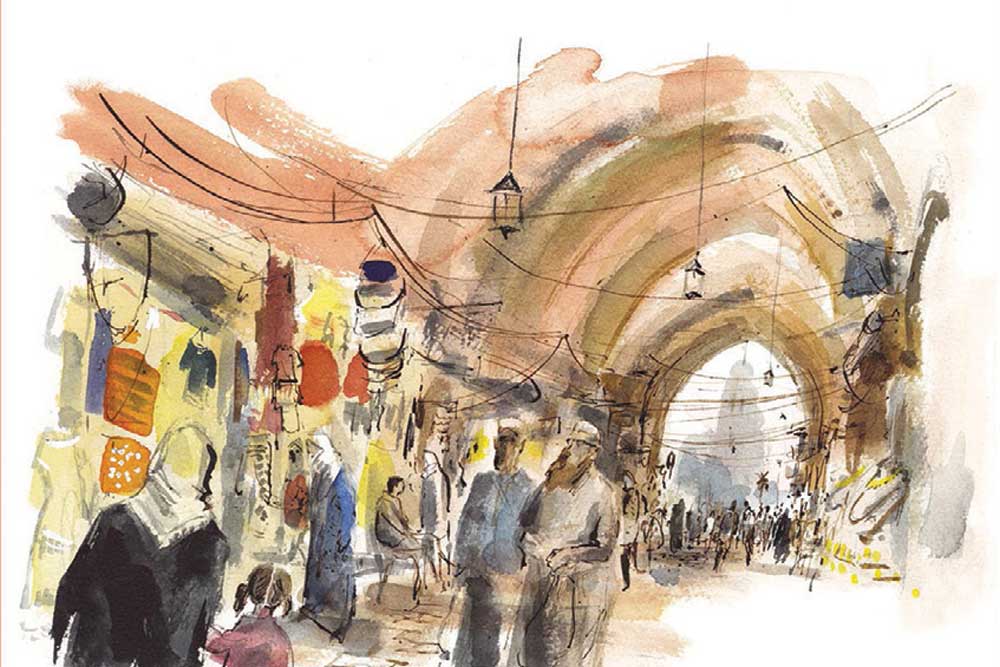 INITIALLY, I HAVE to admit, putting these two books together was a way to plot a trend, nothing more. Two big authors, both writing illustrated hardcover ‘gift books’? Was it, wondered the cynic within me, just a way to pump more money out of those milk cows, to slap a large price tag on something that could be read in under 30 minutes? I am someone who believes in the value-for-money of Big Fat Books, the fatter the better.

But then, in a strange sort of serendipity, these books got slotted together. A theme began to emerge. One speaks of how art matters more than ever in these times. The other uses art to illustrate a prose-poem about a father leading his son to safety away from the home to which they both used to belong.

I’ll begin with the latter. Khaled Hosseini’s Sea Prayer is inspired by that photograph we all saw, of the heartbreakingly tiny body of Syrian refugee Alan Kurdi, washed ashore in 2015. It’s told in the voice of his father, and in true Hosseini style, if it doesn’t wrench a tear out of you by the time you’re done, you’re made of sterner stuff than I am.

‘Because all I can think tonight is/how deep the sea/and how vast, how indifferent./ How powerless I am to protect you from it,’ says a passage, while the illustration on the other page is a watercolour of just blacks and yellows—black misty clouds, yellow sun rising across the water, a black boat with black silhouettes of people. A hopeful painting, if you look at the yellows: see, they’re breaking through the black, but like a portent, the black is too deep to ignore. The illustrator, Dan Williams, moves us through souks and orchards to bombs raining from the sky and children crouching in the rubble.

Neil Gaiman’s Art Matters, illustrated by Chris Riddell, is not a poem as much as it’s a manifesto. Split into four sections—a credo, a bit about libraries, a metaphor about building a chair, and a whole call-to-action for writers and other artists—it’s the most meaningful book about the craft of writing I have read in a long time. I have to speak about how it moved me, personally, in the hope that this will translate into something for you, the reader, in the same way Gaiman uses his own journey to inspire. I, writer of seven books, have been feeling down-at-heel and a bit fed up with the process every now and then. I feel disheartened sometimes: am I doing what I’m supposed to be doing? Is there another path I have missed?

To this, Gaiman replies: ‘A freelance life, a life in the arts, is sometimes like putting messages in bottles on a desert island, and hoping that someone will find one of your bottles, and open it, and read it, and put something in a bottle that will wash its way back to you: appreciation, or a commission, or money, or love. And you have to accept that you may put out a hundred things for every bottle that winds up coming back.’

Later, he talks about how there are perils to success as well: imposter syndrome (which is alive and healthy within me), learning how to say ‘no’, and learning to make time for your art, because the more successful you are, the more ‘the world conspires to stop you doing the thing you do’. It is a book full of gems, and it’s the last section that speaks the most to me.

Something strikes me as I look at both these books—how the illustrations move the message forward. I could read Hosseini’s book as a single prose poem circulated on the internet, but it wouldn’t have impact without the full skies, the bombs raining down. I could read Gaiman’s as one of those ‘why I write’ articles, but without Riddell’s friendly, charming illustrations, would they sink into my brain and take up residence there? As Riddell himself says at the beginning of the book, the only words that are his in it: ‘When wise words have visuals added to them, they tend to travel further.’ I agree.