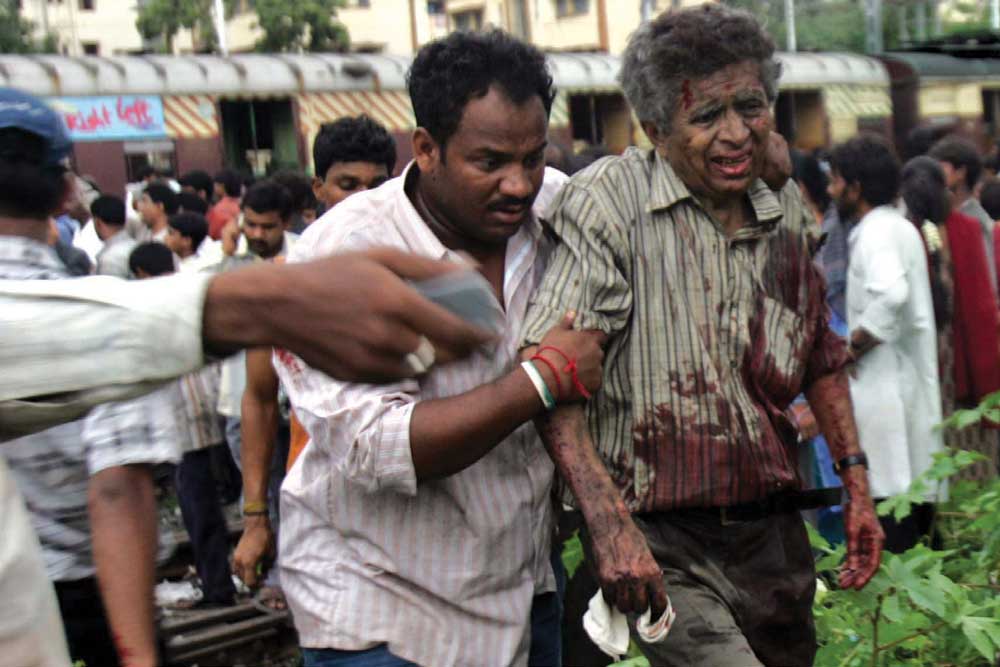 A DECADE AFTER THE 2006 Mumbai train blasts, much of the memory of that horrific day has receded from public imagination. It has become 7/11, just one of several terror attacks on the city. That monsoon evening, in the span of six minutes, seven bombs went off in seven local trains. It was rush hour and the passengers were packed together—as the saying goes—like sardines. Over 200 people were left dead, some 700 injured.

It had been about a month since I’d moved to Mumbai. For some reason, I hung around with friends instead of taking the train home after classes. One classmate that I regularly travelled with was slightly injured in a compartment adjacent to the one that got bombed.

I remember taking the train the next morning on the same route that the blasts had taken place. Fellow passengers moved their eyes from one luggage rack to another, scanned each other and their surroundings. There was a funereal silence, and all you could hear apart from the public service announcement, was the sound of the train on the track.

A decade later, journalists Sharmeen Hakim and Nazia Sayed tell the story behind the blasts. It is a complex story with an unwieldy cast of characters. There are the many witnesses and suspects, the cops and investigators that cracked the case, the lawyers, and the survivors themselves. The trial took almost a decade to wrap up. There were accusations and conspiracy theories. The Mumbai Crime Branch and the Anti-Terrorism Squad got involved in an inter-department feud. A Pakistani terrorist was gunned down, yet a map of the city without a drop of blood was found on his body. A defence lawyer was killed by a so-called ‘patriotic’ don. Just the chargesheet was 10,667 pages long. There were over 16,000 pages of evidence. When the judgment was delivered, it was 1,839 pages long.

To the authors’ credit, the story threatens but never gets out of hand. Writing in a newspaper-like understated style, they take the mass of the subject matter, the many twists and turns of the trial, and fashion a story around it. They start off with the stories of the suspects, cover the day of the blasts and its immediate aftermath, and then get behind the most interesting part of the book, the trial.

What makes the case especially interesting is that it was connected to the 2006 Malegaon blasts. Despite there being enough evidence that a Hindu extremist group was behind the latter attack, the ATS chose to doggedly pursue the Students Islamic Movement of India. Some of those held guilty of the train blasts were even charged with the Malegaon blasts.

The writers seem to suggest there was credible evidence to doubt the charges. Those who were eventually convicted alleged they were tortured into confessing their roles. All the confessions—of Urdu- speaking Muslims, recorded by seven different police officers—read similar. The statements of several important witnesses were recorded only after the confessions were made. Many eye-witnesses were found to have criminal records. One of the star witnesses, Vishal Parmar, who claimed to have seen one of the accused in the train, had been a witness in at least four police cases. His employer, a moneylender named Mukesh Walji Rabadia, also a witness in this case, had also testified in other cases. The call data records of many of the accused showed they were nowhere close to the trains when the blasts took place.

Every single piece of information in such a book needs to be appended by footnotes, which, without impeding the narrative flow, can tell the reader where the information has been gleaned from—confessional statements or interviews. The reader can then judge for himself the validity of the claims. Instead, this is dealt with in unspecific and perfunctory notes at the end of the book. We read, for instance, early on in the book, a detailed account of how the terrorists got radicalised and planned the blasts, only to learn later that this was based on confessional statements that were said to have been obtained under duress.

Otherwise, the writers effectively untangle the knots of the case without bias or prejudgement.