If Hrishikesh Mukherjee had ever tired his hand at writing fiction, he would have read a lot like this Farahad Zama’s The Marriage Bureau for Rich People or its sequel, The Many Conditions of Love. 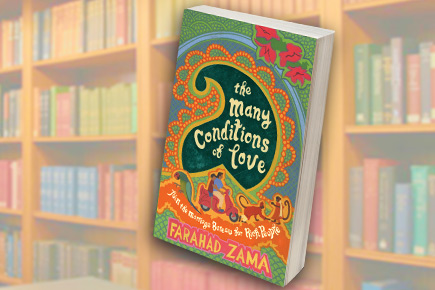 If Hrishikesh Mukherjee had ever tired his hand at writing fiction, he would have read a lot like this book.


For those of you born after the 1980s and the Bollywood snobs, Mukherjee was the quintessential middle-class filmmaker. His canvas was the regular life, his heroes and heroines everyday people with everyday issues. The people who go to work on trains and go for dates on Juhu beach, singing songs in taxis or the rare Fiat car. It was the India of the pre-liberalisation days. When neighbours actually dropped in to borrow milk and people spent summer holidays with cousins. There are problems in this world, yes—relationships that get rusty, jobs that are hard to come by, debts that add up alarmingly. But nothing that can’t be worked out with common sense, good humour and some good old-fashioned love. It’s a sunny canvas, suffused with warmth and middle-class values and common sense.

Zama, a London-based investment techie who writes on the Tube to work, believes in much the same sweet world. He creates a Hrishikesh-like set in small-town south India with his marriage bureau series. A retired government servant, Mr Ali, sets up a marriage bureau to tide over the boredom of senior-citizenness. Clients start to trickle in, and Ali and his wife busy themselves. A shy assistant arrives and is immediately taken under the Alis’ affectionate wing(s). Details are duly recorded, ads put out and suitable matches found, occasionally love even. Problems and problem makers do butt in, but they are generally sent packing with a robust measure of good sense. Or else, love steps in. As it does for the Alis’ idealist rebel of a son, Rehman. Rehman is an interesting, contemporary character, and the girlfriend, Usha, is even better. In a genuinely unexpected twist, she dumps Rehman when he dumps his ideals for stale middle-class aspirations (read car and flat). Mukherjee would perhaps have cast Jaya Bhaduri Bachchan (Mili) or Rekha (Khoobsurat) to play the feisty Usha.

There are other echoes too, more literary ones. Those who follow the lovable Precious Ramotswe, Botswana’s No 1 ladies detective, will find tones of Alexander McCall Smith in Zama’s writing. The unfussy writing, the tension between the old and new ways of life and the championing of hearty doses of common sense. Others will see shades of RK Narayan—the small town in the south (Vizag), the curds and savoury semolina, and the simple women.

But mostly, reading Zama is like catching the umpteenth rerun of a Mukherjee film on a listless summer afternoon. It’s not profound or life-changing stuff, yet suddenly, the gloom lifts and the rest of the day passes lightly, in laughter and conversation.