Young Kashmiris speak up about the turmoil in their state in this explosive new anthology. An excerpt from an essay 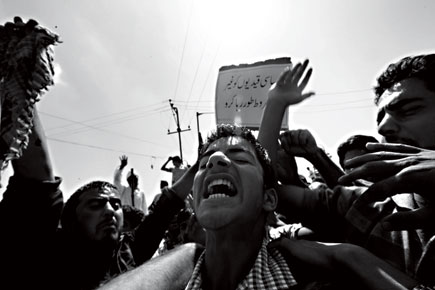 Young Kashmiris speak up about the turmoil in their state in this explosive new anthology. An excerpt from an essay


Till a few years ago, not much writing by Kashmiris on the conflict in their backyard was available. But things have changed. There is a new generation of Kashmiris who, apart from picking up stones to throw at the might of the Indian state, have also picked up the pen to tell their stories. The result is this new anthology of writing on Kashmir. We bring you an excerpt from ‘Captive City’, an essay by Wasim Bhat.

The upheaval of this summer was tragic in the loss of young lives, heroic in its fearlessness, and proletarian in its character. A perusal of the names of those who died and those who were injured reveals that it was a protest of the working class, of the lower middle class in cities and towns, and the peasantry in the villages. The urban educated middle class were fence sitters, and largely lent their support in drawing room discussions and on Facebook by saying ‘I Protest’, never leaving their living rooms. Some made it to television talk shows and talked of azadi.

Azadi is what the peasantry wants; and it’s the cry of the city worker too. The peasantry and the working class in urban areas are the ones who have the smallest stake in the status quo. For a corrupt, semi-feudal, elitist system benefits them the least. At the same time, it’s they who have been at the receiving end of the counterinsurgency grid for over two decades, and this is what makes them most receptive to exploring possibilities of change.

The middle and upper middle class, and the landed elite in the rural areas, on the other hand, have had their hands full for decades, milking—to borrow that delightful phrase—‘the mammaries of the welfare state’ in myriad and endless manners. They live in ‘posh’ colonies of Srinagar, in pockets of the Civil Lines area, while the powerful lord it at their Gupkar Road addresses, manned by stark men in grey safari suits, Uzis snuggling under their armpits. Tinted SUVs parked, revved and ready to go at all times. Lavish golf courses and, of course, one of the best views in the city, are all accoutrements of this privilege.

Any radical change would be cataclysmic for them. Unless of course it was presented as a fait accompli. Or a better deal than the one they enjoy at present. This explains their drawing room support to the people’s movement. Just enough of a foot in the door, enough to keep open the possibility of new alignments, and secure their position as significant players in altered dispensations.

The complexity of this fragmented political articulation in Kashmir has to be understood in the context of a particular history. In its facilitation (and legitimisation) of patently bourgeoisie, elitist and undemocratic processes in Kashmir over the past six decades, the Indian state has meticulously cultivated a diverse and pliant native elite. The challenge before the state has always been to support and legitimise the prominence of this elite in the region, while at the same time attempting to expand and diversify this ‘client family’ base. Over the decades, the compliance and complicity of this elite has achieved compromises around not just the political and legal status, but also around the ecological and environmental condition of the state of Jammu & Kashmir. In return for what amounts to an economic dole, the largesse and patronage [of the Indian state] caters to sections that live in the unquestioned abundance of this status quo.

The native elites legislate and govern, while the Indian state rules.

The current ecological decline in the many water bodies, waterways and wetlands in and around Srinagar is a result of decades of compromised, undemocratic and incompetent policy making. The tonnes of sewage flowing into the Dal and its back waters, transforming once vibrant waterways into cesspools, and the flouting of environmental, forest and land laws for commercial purposes are burdens that these once pristine waters are no longer able to bear. The opening of the Boulevard Avenue for construction of hotels and the filling up of the Nallah Mar canal that once passed through the old quarter of the city, were catastrophic urban planning decisions, the latter effectively decimating the city’s natural drainage.

The Mar Canal, the Nallah Mar, used to be a waterway that coursed through the heart of Srinagar city. The surplus waters of the Jhelum flowed into this canal and Sultan Zainul Abidin had it extended up to Shadipur on the outskirts of Srinagar where it emptied itself at the confluence of the Sind and the Jhelum. Spanned by seven masonry bridges, the canal was an important source of traffic, both of goods and leisure. Bohri Kadal, now a busy intersection in the old town, used to be the busiest vegetable ghat along the Nallah Mar. Children would learn to swim at the ghats, business would be transacted and leisure would be enjoyed. In place of that ghat, a traffic beat box stands in the middle of a crowded chowk. It is here that police and paramilitaries get pelted by stones as processions are taken out.

The Nallah Mar was filled up and converted into an arterial road that would bisect the old town of Srinagar. This was done ostensibly so that modern vehicular traffic could be moved easily into the old town, and because maintaining the pristine nature of the waters of the canal had become a rather complicated task. Filling it up solved both, and when Ghulam Mohammad Sadiq was Chief Minister in 1970, the decision to bury this unparalleled piece of heritage was taken.

Only a few decades ago, a shikara ride through the maze of interlocking water ways of Srinagar, shrouded by dense drooping willows, was still a serene experience. The backwaters of Rainawari with its beautiful waterfront mansions, temple spires, ghats, quaint bridges were the enchanted backyard of my childhood. The backwater is still there, it’s just that it’s not so pretty anymore, and it smells.

Srinagar is a city that still lives on water though no longer with it.

It is this backwater route that many used when the downtown was placed under a severe lockdown this summer. A 45-minute ride through the backwaters, and one would land at the Boulevard road, the busiest tourist hangout in Srinagar. The fact that Srinagar sits on so much water also makes it unmanageable, for there is so much then that cannot be monitored and put under surveillance. Even though there are patrol boats and sentries overlooking bridges who try to enforce the curfew on the waters as well. In the initial tumult of the militancy of the 1990s, the Dal backwaters were a bastion for the militants who would just melt away after making a strike, or lie low if there were search operations on the mainland.

The city in its density, in the medieval huddle of the old quarter, the intricate loop of its waters offered its denizens spaces, interstices, gaps, gasps of breath without which they would not have survived the harshness of this summer. Or that of summers past.

Without which they would not have survived the harshness and vagaries of centuries past.

This city is their refuge and their fortress. Through most of the summer this year, the ‘Go India Go Back’ graffiti was omnipresent, painted in black or white on walls, shutters and streets across the city. The local cable news that most people used to watch was banned; newspapers were not delivered for weeks on end. In the web edition of the Greater Kashmir newspaper every day, the section called ‘Latest News’ carried news of some more young men getting shot at in protests. The Darth Vaders stood impassively just outside our gates, from morning through the blazing summer noon, till dusk, fiddling with their AKs. Indian talk show hosts tried their vacuous best, 24×7, to unravel what it meant when Kashmiris cried azadi.

The milkman used to make the delivery at 12 at night:

‘The city from where no news can come  is now so visible in its curfewed night.’

How many gun barrels stare at us? Enough to keep us anxious and edgy, always looking over our shoulders. We are the children of a war that has no scruples. The war that moves in the billion synapses of our brain, releasing chemicals that make us anxious and wary, tiring us and making us old. Catching us unaware, it has captured the rhythms of our being.

The winter is about to ride its crest. The birds I saw in my childhood are no more. Songs are forbidden in this forgotten city. The snow has not yet covered the mountain gorges, the crevasses are a frenzy of rock and gravel. The dogs bark incessantly throughout the night, lost in the streets and dark alleys. The cars are a blur and the pedestrians wary. Olive green and irritated, the trucks snarl and rumble through narrow potholed roads, blaring horns and flashing headlights.

They are the overlords of this earth, the plumed birds have fled.

The constant din keeps the city awake, in enduring captivity.