A poet in his liminal world 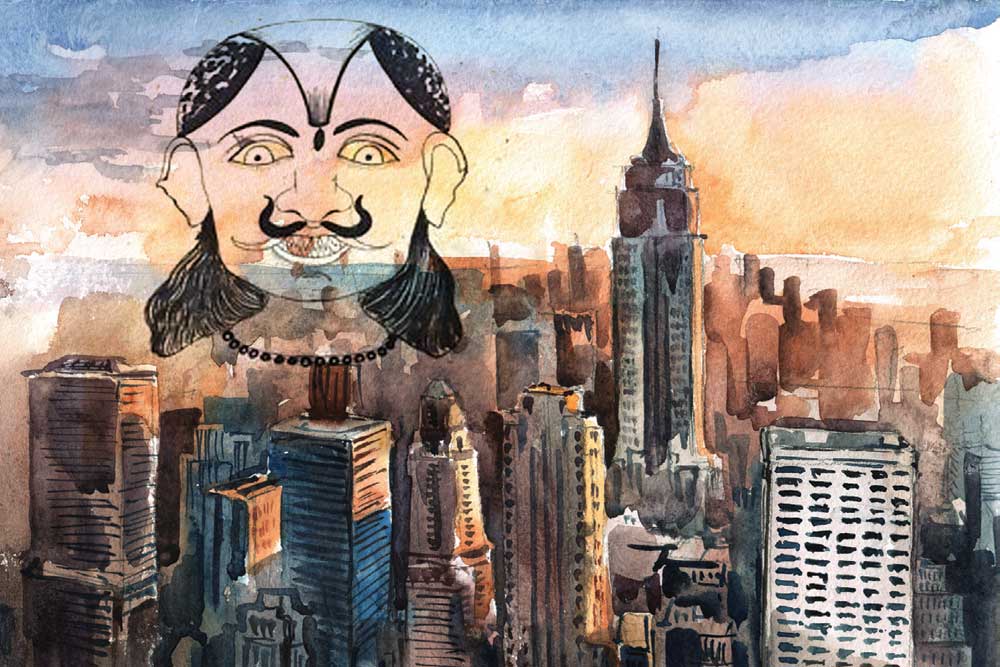 THE WORLD IN Thachom Poyil Rajeevan’s newest collection, A Yaksha in America, has more than a touch of the fantastical within it—the constraints of time and space loosen and dissolve in his poems, ghosts and dreams visit bearing messages, sunken ships emerge from a sliver of sky glimpsed between office files, a yaksha (a spirit in Hindu mythology) scans the sleeping residents of the United States. At times, inhabiting Rajeevan’s world can feel a little bit like a fever dream with refrigerators that sleep-walk and house polar bears. The natural world, in particular, inspires the stranger poems in the collection.

In ‘Singers,’ when the white and red champak trees bloom, they ‘begin to sing’ and transform into the classical musicians Kumara Gandharv and Kishori Amonkar. In ‘Kanavu’ and ‘Hogenakkal’, the poet animates the local landscape of these two regions—the forest retreat, Kanavu, is described through the distinct personalities and quips of various tree species, and the history of the Hogenakkal rivulets that feed the Kaveri river is framed as one of a family whose lives include love, separation, drought and urbanisation. Rajeevan’s poems call for ‘citizenship for trees’ in each nation, they lament that flowers do not know that ‘it’s only about flowers’ he writes, and celebrate the act of boiling rice beside a paddy field to offer to ants and crows.

The figures in his poems are often ambiguous spectres (imagined and real) in liminal landscapes with the poems evading clear interpretations—slipping through any reading I ascribed to them as if through a sieve. The same mysterious, God-like presence potentially inhabits both the titular poem, ‘A Yaksha in America’, and ‘The Hunt’. While in the former, it addresses a sleeping world of people and creatures, in the latter, it becomes the addressed while continuing to wield a similarly disconcerting amount of power as evidenced in the lines, ‘When I go hunting/ the antlers I aim at fall / pierced by your bow.’ In ‘Neelakurinji,’ Rajeevan explores the haunted possibilities between two people on the same train who are unable to make themselves understood to one another. They could be strangers or estranged—we’re never told which and that ultimately allows the poem to exist in a heady, dreamlike space where the journey is fraught with the collision of multiple possibilities.

Themes of ageing and death also abound in the collection, and these poems tend to be less abstract than the others. As the poet recounts the ageing of his father and remembers the Malayali poet T Guhan who died young by suicide, he finds death callous and unfocussed with ‘killing and throwing away’ being the ‘past-times of chakradaries’ or those who wield the wheel. In ‘Vasco da Gama (1460-1524),’ alluding to the explorer’s life and eventual death away from the country of his birth, he is shown caught between shores and timelines, in a perpetual pursuit of continents he doesn’t reach. Setting the poems at a remove from reality allows the observations and conversations to sound less stilted.

A Yaksha in America is difficult to summarise as the 50-odd poems oscillate between clearly sketched out scenes and shape-shifting abstractions. The final poem of the collection, ‘No More Poetry,’ cautions against anthologising poetry because ‘left to themselves/ the poem The Cow / will eat the poem The Grass, / the poem The Tiger/ will pounce on/ the poem The Cow…’ and so on. It’s a suitably whimsical assessment of a collection whose world strains against containment. Some of the poems aren’t as notable as others, and the general accessibility of his verse is occasionally interrupted by a wordiness that would stump most readers—though the contradictions in his oeuvre sit more comfortably together than most.