Cocktail crowds don’t trip over each other trying to grab a photo op with these writers. Celebs, they’re not. But away from the media glare, their books have found more readers than anyone imagined. 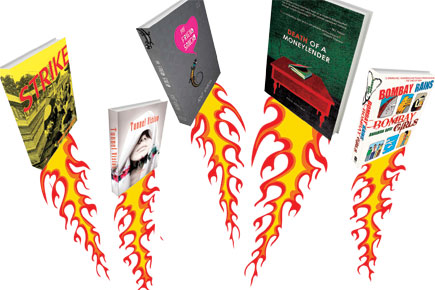 Celebs, they’re not. But these authors have found more readers than anyone imagined.


Nobody really knows them. When they emerged with their books, not a feather ruffled in the Indian world of letters. If the publishing world were likened to a mall where mannequins are done up in Big Names to bedazzle window shoppers, these guys are the shop-floor busybodies. Quiet, unassuming—and engaging enough if given a chance.

Try this test. Bandy the names Amit Varma, Anirban Bose, Shandana Minhas or Anand Mahadevan at a gathering, and watch the responses. The geeky blogger might have heard of the first one, but surely not the rest. It’s about time they did, though. In the glamfest that is today’s world of books, all about oomph-oozing advances, slick marketing gimmicks and Disney theme-party book launches, these authors have turned out books that are actually being read, recommended and passed along: the sleeper successes of the year that nobody flared party blowhorns in your ears to make you read.

In the last year or so, these fiction writers have gone on to sell several thousand copies since publication. Many of them have had their books going into a second or third reprint—an index of a book’s currency. And yet, no drums are being beaten for them. Some of them may even prefer it that way. To an author of a certain disposition, there is nothing quite like success without fanfare. “I never expected my book to have done so well,” says Mumbai-based blogger of India Uncut and writer Amit Varma. His first book, My Friend Sancho, is a racy read about a young man’s stint in the Bombay media and how he befriends a girl who is a link to a crime story. Released in the middle of this year, it has already sold over 15,000 copies.

Then there is Anirban Bose, a kidney specialist now based in Rochester, New Jersey, who was born and raised in Ranchi. His first book, Bombay Rains, Bombay Girls, was published in 2008, and has already rung in sales of some 25,000 copies. This has meant a third reprint.

Karachi-based Shandana Minhas, meanwhile, made a quiet debut across the border with Tunnel Vision, which is going in for a second reprint. And last but not least is Toronto-based Anand Mahadevan, a writer of Indian origin whose first novel, The Strike, was published in 2006 in Canada and vanished off bookshelves when it appeared in India a few months ago. Another debut to impress booksellers is journalist-painter-writer Kota Neelima’s Death of a Moneylender, a fictional account based somewhat on her reportage of farmer suicides.

In many ways, it’s a terrific time to make a debut as an author in India. Works by Advaita Kala, Anita Jain, Meenakshi Reddy Madhavan and Anuja Chauhan—four first-time writers whose efforts have sold like hot cakes—have already proven the market is more than ready for fiction that’s fresh if not exactly fervid in the ambition of becoming a literature classic. Suddenly, it seems as if Indian readers in English are reading Indian books in English, regardless of genre.

So what’s happening? Saugata Mukherjee, senior commissioning editor at HarperCollins India, thinks it’s a clear indication of the proliferation and depth of writing emerging from contemporary India. “There are numerous voices now,” he says, “and people from varied backgrounds are registering the world from a different filter. And that shows in the writing. We’re expanding our story canvas and literary palette.”

HarperCollins brought out Anirban Bose last year, and appear to have dug up a gem. “I went through nearly 200 rejections, and worked and reworked my manuscript. At one point, I wasn’t even sure whether my efforts will bear fruit,” says Bose about his book, which does to the medical school experience what Chetan Bhagat may have done with the IITs and IIMs. His book is the bildungsroman of a youngster from Ranchi who cracks medical school in Bombay, to be forewarned before leaving to beware ‘Bombay rains and Bombay girls’.

The success has taken Bose aback. The book had launches at Hyderabad, Calcutta, Mumbai and Pune, but that was all the ‘marketing’ that really happened. “Months before the launch, I created my website which spoke of the book. But at the end of the day, my book did well due to word-of-mouth publicity. People who read portions on the site went on to buy the book. When they read it, they liked it and recommended it to others.”

It’s an opinion Amit Varma concurs with. He might have been a relatively well-known blogger, but that doesn’t translate into saleability in a jiffy. “I was confident I’d written a book that was enjoyable and thought provoking,” he says, “Basically, a good book sells itself. I’d got generous offers from four publishers and the book had been long-listed for the Man Asian Literary Prize. All that gave me some confidence. Also, my blog does have a decent readership, and I thought that would have some impact at the time of release. But books basically take off in any market because of word-of-mouth. You can market a book all you want, but a book only takes off when your first batch of readers likes your book and recommends it to friends.”

Similarly, Anand Mahadevan’s book is a fairly straightforward story of a south Indian family in the Nagpur of the 1980s, and circles around a railway strike and how that affects the characters of the book. Within that narrative is a nuanced depiction of Tamil Brahmin idiosyncrasies; Tamil film culture of the 1980s; and the reptilian language and caste politics of that time.

For a first book, Mahadevan’s effort was published to glowing reviews in Canada. It even drew high praise from renowned novelist MG Vassanji. Surprisingly, Mahadevan wasn’t even in India when his book hit bookstores this May—it has sold over 4,000 copies since—because he was busy shifting home from Toronto to Boston. All the coordination with media outlets in the country happened over email and phone. “During the first few weeks,” he recounts, “I found old friends and extended family reaching out to me via the internet and Facebook because they learned about my book and me through the media, and so in some ways, every review, good or bad, helped me re-connect with people who had been in my life in the past as well as meet new folks in India, readers and aspiring writers alike.”

Clearly, this is a far cry from the kind of marketing that the Big Books in India generate. As a hit, Mahadevan’s book is as silent a one as it can get. Online networking, as both Mahadevan and Varma point out, can only do so much to create a ripple effect for one’s work.

Shandana Minhas, unlike the two, admits to being “clueless about networking”. Yet, Tunnel Vision had a charmed take-off. “I don’t think books, being inanimate/non-sentient objects, really care how they are launched. My book launch took place at The Second Floor, or T2F, a lovely little space in Karachi so passionate about the written word and its attendant circus that one of its founders carried copies of my novel back from India to put on his shelves because local distributors were mysteriously unable to procure them. That was a positive enough response in itself, and the copies he brought were sold out by the end of the evening.”

BUT DON’T BE SHY

No matter how much they’d downplay their small efforts to sell their wares, almost all authors admit online networking might have contributed to spreading the word. Anand Mahadevan did that in Canada. “I bought ad-space through Google and Facebook to reach out to a younger and internet savvy crowd—folks I thought would make an ideal audience for my book—and promoted the book for several months starting a few weeks before the release,” he says. Shandana Minhas’ book has a Facebook page. Anirban Bose created his own website. Amit Varma also put out information about his book on his well-read blog.

Regardless of how much he likes the idea of being a withdrawn writer, Mahadevan thinks a new writer should reach out. “So, often at festivals, the audience members are there to listen to a reading, and if a writer reads well and piques their interest, they will invest in his or her book and have them signed, etcetera. So an interesting author who is funny, engaging and able to master the stage can often outsell an author of an interesting book who may not have social or people skills,” he observes.

Almost all these writers are working on their next books. Many of them seem set to convert their books into films. Amit Varma is in talks with Govind Nihalani to make a film of Sancho and will be co-writing its screenplay. Mahadevan is in talks with a theatre group in the UK about a stage version of The Strike. Bose’s book may also go the film way, and so also Minhas’ in Karachi.

In due course, these silent hits will blare with all the sound and fury of celluloid streaking its way to a screen near you. This, though, is some sign of a book’s achievement. Next time, watch out for that book at the corner of the shelf. If it’s not an assault on your eardrums, it might just be the next bestseller you’re thumbing through.