The localisation of the bard as a cultural study 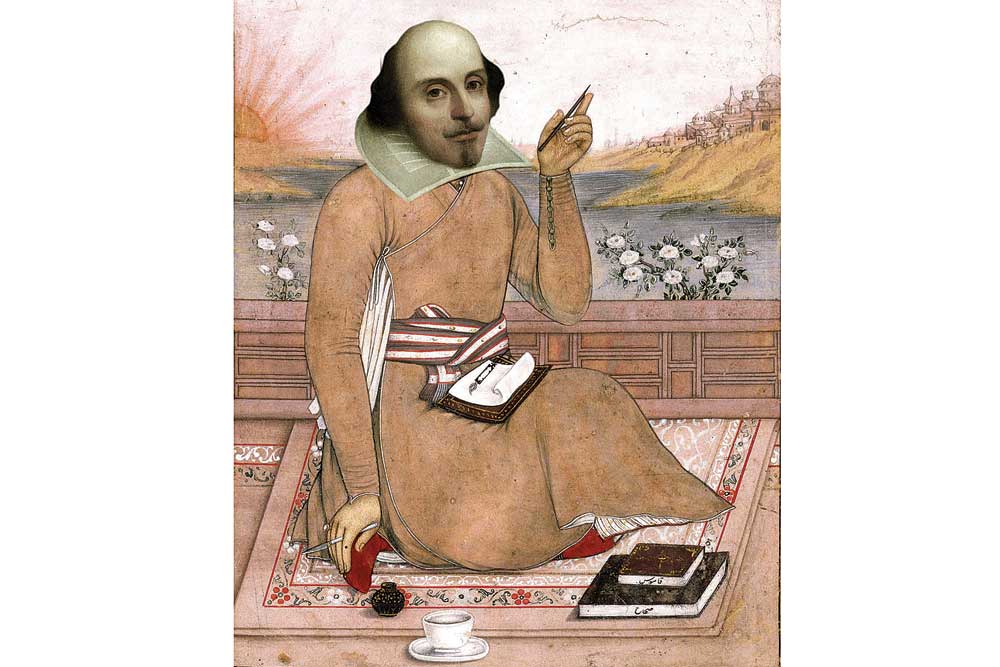 VERY EARLY IN Masala Shakespeare —in ‘Act One, Scene One: Enter Masala,’ to be precise— Jonathan Gil Harris mentions the aghast reactions of his Anglophone Indian friends when he likens popular Hindi cinema to Shakespeare’s work. They decry the derivative, ‘cheap flash’ of the former; he replies that Shakespeare’s plays, ‘at least as performed 400 years ago to mixed audiences of literate and illiterate, noble and poor, also routinely featured naach-gaana (song-and-dance numbers), often celebrated sanams (lovers) in the presence of trees, and plundered their kahaaniyan (stories) from everywhere.’

Harris isn’t making the case that mainstream Hindi films frequently achieve the level that Shakespeare’s plays do (assuming one should even compare across mediums), but he makes an important larger point throughout this book: about the unfair denigration of ‘masala’ art, a form where many tones and moods coexist, where the classical Aristotelian unities are not heeded, and ‘too-muchness’ can be a virtue. ‘In the masala movie, there is no space for purity. Elements that are supposedly separate and even incompatible bed down under the same roof: tragedy consorts with comedy, poetic language with coarse slang, prim morality with unbounded desire…’

Playful and erudite at once, Masala Shakespeare took me back to my first reading—as a teen obsessed with old Hollywood—of a favourite book, Robin Wood’s Hitchcock’s Films Revisited. Here was an academic with a literary background pointing out that an oft- derided musical scene in Howard Hawks’ Western Rio Bravo was comparable to the role of Autolycus in The Winter’s Tale (‘a concession to popular taste that, one feels, delighted Shakespeare’s heart very much’). Harris mounts similar—if not exactly analogous—arguments about the relationship between Shakespeare and many aspects of Indian popular culture, including cinema.

The Shakespeare-Bollywood comparison is not a new one, but recognising the connection requires both a close engagement with the Bard’s plays in their original form (as opposed to the Lamb abridgements, which lead a reader to focus on plot rather than on rhythms of language and idiosyncratic structures) and open-mindedness toward pop culture, including ‘massy’ movies. Understandably, not many people combine these qualities. But Harris does this with vigour and affection.

It helps that he is himself a product of a mixed heritage. Born in New Zealand, living most of his early life in England and the US, Harris first visited India in 2001, became fascinated by the country’s diversity, settled down here, and grew to understand and love such things as gol gappa and Hindi cinema: two creations made up of unsettlingly varied ingredients that one might gradually acquire a taste for.

Masala, mixture, multiplicity, more- than-oneness—these are words that recur through this book. They link the tonal variedness in Shakespeare’s work with the pluralism of Indian cultural forms, and with India itself—a plurality that is in danger now owing to the hardline Hindutva movement and its emphasis on the ideal of a singular, ‘pure’ Hindu rashtra. Inevitably, this is also where the book acquires its more political stance: Harris touches on current events such as the proliferation of ‘anti-Romeo squads’ (which ironically are more about restraining India’s ‘Juliets’) and the lynching of minorities, as well as displays of hyper-masculinity and nationalistic jingoism that counter India’s syncretic history.

Done differently, Masala Shakespeare might have invited the allegation that it stretches a point too much. That this doesn’t happen is a tribute to Harris’ attention to detail. A point arrived when I stopped thinking about the central argument and instead began delighting in the minutiae.

Included here are analyses of well- known, clearly Shakespearean films (the Vishal Bhardwaj trilogy, Sanjay Leela Bhansali’s glorious Goliyon Ki Raasleela Ram-Leela), films that on the surface have little to do with the Bard (Dil Chahta Hai, Lagaan), and under-seen works like Isi Life Mein, a Taming of the Shrew adaptation, and 10 ml Love, A Midsummer Night’s Dream set in contemporary Mumbai. Harris looks closely at nautanki versions such as the Twelfth Night reimagining Piya Behrupiya, a multi-lingual play that includes—to the delight of viewers who remember the lowbrow wordplay of Kader Khan and company in 1980s Hindi films—a scene where the Toby Belch character says, “I am Toby, and you are my Gobi.” He discusses the cult of Hamlet in the theatrical traditions of Mizoram, and even encourages his students to stage a Pericles adaptation (the magnificently titled Hera-Phericles is the innovative result). He also examines the Shakespeare- India connect in literature ranging from Vikram Seth’s A Suitable Boy and Salman Rushdie’s The Moor’s Last Sigh to more recent novels such as Preti Taneja’s We That Are Young, and Anjum Hasan’s Neti Neti.

Even if you don’t agree with all his observations, there are many fine insights. How interesting, for instance, to consider that the Karan Johar-produced 2012 film Agneepath is, not just at the level of its plot, a Hamlet-like story about sons trying to remedy the wrongs done to their fathers (the original 1990 Agneepath was produced by Johar’s father Yash Johar, who was devastated by its failure). Or that the falling note in the Omkara song, O Saathi Re—suggestive of looming tragedy, contrapuntal to the blissful romantic scene it accompanies in the film—may be likened to Shakespeare’s repeated use, in Othello, of an iambic meter where a line trails away rather than ending with a ‘masculine’ stressed syllable. Or how Rituparno Ghosh’s The Last Lear, even as it ‘genuflects at the altar of a singular Shakespeare-devta … Thomas Macaulay’s Shakespeare, the repository of high art,’ does this by casting mainstream superstar Amitabh Bachchan in the lead and commenting on Bachchan’s screen persona in a ‘lower’ form, popular cinema.

Reading this book was also to be alerted to details about Shakespeare plays that one could have missed. Despite a passing familiarity with The Taming of the Shrew (mostly through films), I didn’t know that the main story is a performed narrative, framed by another tale about a hallucinating nobleman. (As Harris points out, the wholesale removal of the framing story in most theatrical performances has a big effect on how one interprets the play.) Elsewhere, discussing the opening of Romeo and Juliet, where two street-fighters engage in a delirious verbal joust, Harris examines how a seemingly fluffy bit of stage business can pre-echo the main themes of a profound tragedy. In so doing, he also extols the virtues of that most denigrated of comedic devices, the pun, and observes that the wordplay prepares us for Romeo and Juliet’s first meeting, ‘when Romeo the Montague breaks into the Capulet masque wearing a mask. Romeo is a pun here: two identities in one.’

Most of all, as someone who is annoyed by the condescension associated with the word ‘escapist’, I appreciate Harris’ views on fantasy and escapism as being vital components of life. ‘Fantasy is the real fabric out of which our longing for a better world is fashioned […] in all its escapist unreality, the beating heart of the masala movie is immersed in the traumatic realities of the world.’ Thus, while Gulzar’s 1982 comedy Angoor is an adaptation of one of Shakespeare’s brightest plays The Comedy of Errors, it may also carry echoes of the writer-director’s Partition memories of separation and loss, and a search for the other half of a divided self. With its many careful readings in this vein, Masala Shakespeare is both a stimulating, far-reaching work of cultural criticism and a tribute to a country with conflicted ideas of what it should be.